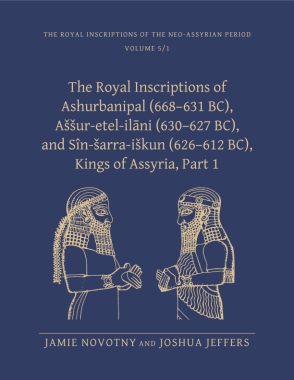 In this book, Jamie Novotny and Joshua Jeffers provide updated, reliable editions of seventy-one historical inscriptions of Ashurbanipal, including all historical inscriptions on clay prisms, clay cylinders, wall slabs, and other stone objects from Nineveh, Assur, and Kalhu. Each text edition is accompanied by an English translation, a catalog of all exemplars, a comprehensive bibliography, and commentary containing notes and technical information. This volume also contains a general introduction to the reign of Ashurbanipal, his military campaigns, the corpus of inscriptions, previous studies, and chronology; translations of the relevant passages of several Mesopotamian chronicles and king lists; photographs of objects inscribed with texts of Ashurbanipal; indexes of museum and excavation numbers, selected publications, and proper names.

Ashurbanipal is mentioned once in the Bible (Ezra 4:10). The other two kings listed in the title are some of the last kings of Assyria, up to the time Nineveh was conquered in 609 BC by Medes and Chaldeans. Note that this is part 1, and that part 2 is still being prepared for publication. The publisher’s description of the book mentions only Ashurbanipal, so I do not know if Aššur-etel-ilāni or Sîn-šarra-iškun make into this part, or if they are in the next one. The online version of this volume, however, is already up and running, and there you can view (some of?) the inscriptions of these last two kings. The online material appears to contain most, if not all, of the information in the printed book, but I must say it is more enjoyable for me to use and read the printed volume, while using the online version for research. If you are interested in ordering a copy, visit the Eisenbrauns page. The announcement sent out yesterday included the code NR18 which you can use to receive a 30% discount.

This book is the first part of volume 5 in the series entitled the Royal Inscriptions of the Neo-Assyrian Period, or RINAP. Now, all we need is RINAP volume 2, the inscriptions of Sargon II (the publication of which I was told four years ago was imminent). RINAP is the successor to an earlier publication series named RIMA. You can explore both of these, and more, at the Royal Inscriptions of Assyria Online Project. These online resources are already very good, but they keep getting better and better. Big thank you to Eisenbrauns and all the other individuals, organizations, and acronyms (Oracc, RIAo, OIMEA, etc.) who make this available.