The Atlantic sews together the story of the “first-century Mark,” Hobby Lobby, and Dirk Obbink.

Stephen Oryszczuk takes a tour of the only accelerator mass spectrometry lab in the Middle East, and its contribution to ongoing archaeological excavations.

Scholars are studying erasures and corrections in the Leningrad Codex.

Ruth Schuster considers what caused the collapse of Byzantine farming in the Negev highlands.

Ianir Milevski and Liora Kolska Horwitz investigate the domestication of donkeys in the ancient Near East.

The summer issue of Biblical Archaeology Review includes articles on forced resettlement at Tel Hadid, old Christian manuscripts, and the scarab. (BAR appears to have quietly cut its number of issues each year from 6 to 4.)

The British Museum has created historical city travel guides to Nineveh in the 7th century BC and to Rome in the 1st century AD.

Pompeii Live, “the British Museum’s most popular exhibition of the last decade is set to return, in the form of an online broadcast” that will premiere on May 20.

Lachish is the subject of a 7-minute video, the latest in the Life Lessons from Israel series.

Satire: Stanford will be offering a new course entitled “How to be a Gladiator,” and signed waivers will be required to enroll.

A NPR piece looks at what has happened with tourism at Petra, going from 8,000 people a day to zero. Now the place is being taken over by cats, sparrows, and wolves.

Assassin’s Creed Discovery Tours of Ptolemaic Egypt and Classical Greece are free through May 20. Explore those worlds in a “living museum.”

Accordance has photo resources related to biblical archaeology on sale.

There is no shortage of material for an archaeological biography of King Ahab.

To celebrate his birthday, Shmuel Browns drove up to Sussita and took some beautiful photos. 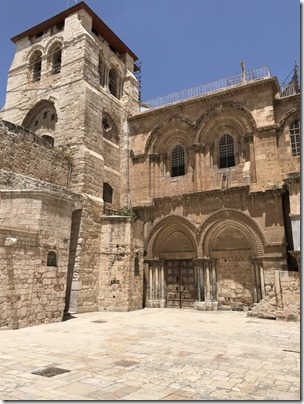 All locked up: The Church of the Holy Sepulcher in Jerusalem, May 12, 2020