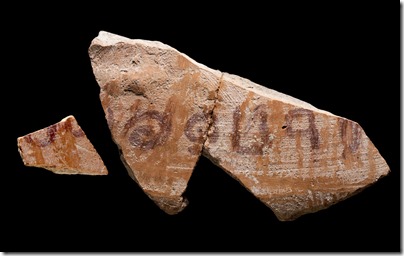 The inscription was published in the Jerusalem Journal of Archaeology (free pdf). Stories have been published in The Times of Israel, The Jerusalem Post, Haaretz, Bible History Daily, and elsewhere. The IAA has posted a 1.5-minute video (in Hebrew). The following is my summary of the main points.

The Sherds: Three pottery fragments were discovered with letters written in brown ink. Two of the sherds join together, but the third does not and its relationship to the other two is unclear. The sherds came from a small jug whose broken pieces had been swept into a stone-lined pit.

The Archaeologists: The excavations at Khirbet al-Ra‘i are directed by Yosef Garfinkel of the Hebrew University, Sa’ar Ganor of the IAA, and Kyle Keimer and Gil Davies of Macquarie University. The lead writer of the journal article is Christopher Rollston of George Washington University. Luke Chandler is credited with organizing a team of volunteers.

Date: The inscription is dated based on its stratigraphical context, pottery typology, and the shape of its letters to the late twelfth or first half of the 11th century, or approximately 1100 BC. This is approximately the time of Gideon. This is also the first Iron Age I inscription found in the Shephelah.

Language: The inscription was written by a trained scribe from right to left. The article’s authors identify the language as “Proto-Canaanite” or “Early Alphabetic,” in part because of their dubious assumption that Hebrew did not exist this early in history.

Jerubbaal: Four letters can be read clearly, reading rb‘l, equivalent to “rubbaal.” The initial letter is not fully preserved, but it may be a yod. If so, this would be the first discovery of the name Yrb‘l (Jerubbaal).

Is this the biblical Gideon?: The article’s authors raise the possibility but do not come to a conclusion either way. Here are some factors in favor of each position:

In Favor of Identifying with Gideon:

Against Identifying with Gideon:

Conclusion: This discovery is valuable because inscriptions are rare in the land of Israel at this time. The potential connection with Gideon’s alternate name, and the proximity of the date, makes the identification possible but by no means certain. 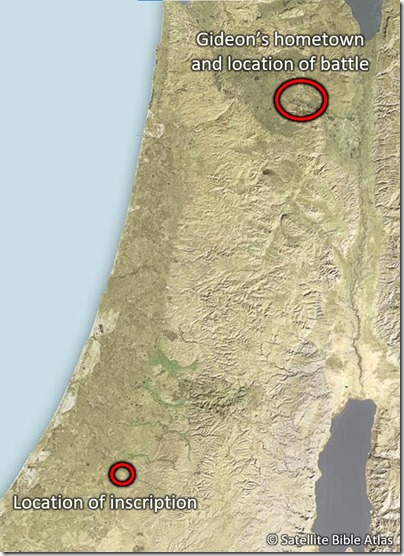 Location of discovery of “Jerubbaal inscription”; map from the Satellite Bible Atlas