Today’s announcement cannot wait until the Weekend Roundup. I expect that the discovery of ivory inlays in Jerusalem will rank #1 in my list of “top discoveries” of the year.

The story is reported in the major sources (including Haaretz, Arutz-7, AFP), but I am going to provide some brief commentary on the well-illustrated report in The Times of Israel.

Some 1,500 ivory fragments were excavated from the City of David’s Givati Parking Lot, but only discovered during wet sifting in the nearby Emek Tsurim National Park.

The unappealing name of the “Givati Parking Lot” refers to an area on the northwestern side of the City of David, just below the Old City’s Dung Gate. 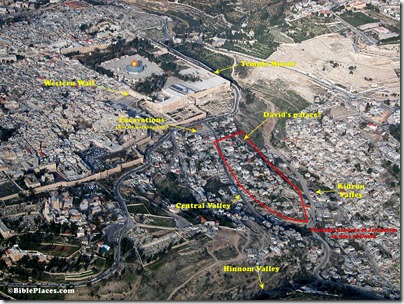 The City of David, aerial view from the southwest

The fact that they found 1,500 fragments, but only in wet sifting, indicates that they found slivers that were not identified during the primary excavation. Someone must have done an enormous amount of work to piece these slivers into the whole pieces that are shown in the article.

The ivory pieces, which would have made up decorative inlays for furniture or a door, were discovered in a monumental building that was in use when Jerusalem was at the height of its power (the 8th and 7th centuries BCE) and was likely razed during the Babylonian Conquest of 586 BCE.

An important structure, possibly a royal building or a palace, was decorated with these ivories in the time of Hezekiah or Manasseh. The Babylonian destruction explains why the archaeologists found so many tiny fragments.

Ivory appears in the Bible in numerous locations, referring to extreme opulence, such as King Solomon’s “large ivory throne” (1 Kings 10:18), King Ahab’s palace adorned with ivory (1 Kings 22:39) and firebrand warnings from the prophet Amos to stop lolling on ivory-inlayed beds and couches (Amos 6:4).

In other words, this discovery really is not unexpected. The Bible indicates that ivory decorated royal furniture in the capital cities of both Samaria and Jerusalem. What makes this discovery so extraordinary is that in 150 years of excavating in Jerusalem, archaeologists have not found ivory pieces. The reason is not that they didn’t exist, but that archaeologists were missing these fragments because they weren’t wet-sifting.

The capitals of Nimrud and, to a lesser extent, Samaria, are known for their wealth and opulence. But First Temple Jerusalem? Many scholars argue that the Holy City only came into its own around the end of the 8th century BCE — exactly when these ivory finds are dated to.

Yes, this certainly supports the prominence of Jerusalem at this time. But the fact that we didn’t have such evidence yesterday only means that we were wrong to assume that the absence of evidence was meaningful.

In a painstaking collaborative process, the fragments were reassembled in the IAA laboratories by conservator Orna Cohen, together with Ilan Naor.

“At the end of the process of joining and ‘fusing’ hundreds of the fragments, we were able to understand that the assemblage includes remnants of at least 12 small square plaques – about 5 cm x 5 cm, at most 0.5 cm thick – which were originally inlaid in wooden furnishings,” Cohen and Naor said.

Kudos to these hard-working experts. May they receive the honor they deserve for their labors.

The style of the decorative motifs points to a clear Levantine influence, she said, and was popular throughout Mesopotamia. They were likely forged in Syria and then imported to Jerusalem, either as furniture or a door, or as inlays ready to be affixed.

I don’t think anyone would suggest that Jerusalem (or Samaria) had their own ivory workshops, so they were imported from the north. Perhaps Ahaz, in his friendly relations with the Assyrians, was entranced by more than the  altar in Damascus (2 Kgs 16:10).

“When we did a reconstruction, we imagined something between a couch or a chair, upon which a person would recline,” she said. Due to other luxury items that were also uncovered in the monumental building — vanilla-flavored wine, special serving dishes and a rare agate seal, she said the team of researchers envisioned a rich, opulent feast. “You can imagine these couch/chairs as a place where they sat at the banquet,” she said.

If you haven’t read The Times of Israel article already, the illustration for this paragraph is working clicking over for. It gives you an idea for how these inlays may have decorated the furniture. Of course, wood is never preserved in Jerusalem, so the artist relied on furniture parallels in Egypt and his imagination.

“There are only three motifs, all vegetative, and they’re very known on ivories in general in ancient Near East art, especially at this time,” she said. What was more interesting is what symbols were left out, she said, including, for example, a sphinx or other animal and human depictions.”

This suggests that Ahaz or Hezekiah or whoever placed this order was choosing from the aniconic section of the ivories catalog. This contrasts with Samaria where creatures were depicted on the ivories. 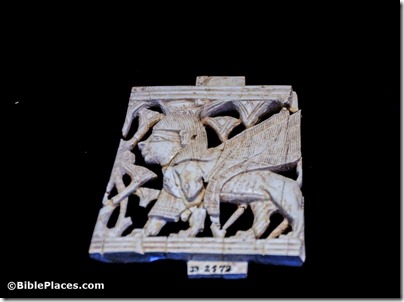 Ivory fragment from Samaria, depicting a sphinx, 9th-8th centuries BC (on display in the Israel Museum)

The article notes that the ivories will be displayed next week at the 23rd Conference of the City of David Studies of Ancient Jerusalem.

I would guess that archaeological protocol in Jerusalem now is that everything from the 1st and 2nd Temple periods is being sifted. This means that there will be more future dramatic discoveries.