Here’s One to Ignore

I had no idea when I wrote yesterday about Finkelstein’s view of the City of David that he has a new book coming out on David and Solomon. Like Unearthing the Bible, David and Solomon: In Search of the Bible’s Sacred Kings and the Roots of the Western Tradition is co-authored by Israel Finkelstein and Neil Asher Silberman. I haven’t seen the book yet, but you get an idea for the content of this book from a review in Publisher’s Weekly:

The authors are careful to note that the absence of contemporary confirmation outside the Bible is no reason to believe that the characters did not actually exist. Rather, the biblical stories form the basis for a legend tradition in which the Davidic legacy gradually transforms “from a down-to-earth political program into the symbols of a transcendent religious faith that would spread throughout the world.”

To whom would I recommend this book? Only to those who need insight into the creativity that is required (or allowed) when you jettison the major historical sources and set about inventing your own history.

Which reminds me of a similar point: I have my students read from (many) liberal authors with whom I greatly disagree. I wonder how many liberal teachers require their students to read from conservative authors? I can tell you from own experience in graduate school: liberals don’t seem aware that there are other opinions. And they certainly don’t want their students exposed to those ideas. Yes, it is ironic that these are the “liberals.”

On the JPost Article on the City of David Excavations

The Jerusalem Post has a lengthy article on the recent excavations in the City of David. Though there are some basic factual errors, the article does a good job of informing the reader of some of the different views about the latest archaeology in the oldest part of Jerusalem. The two major excavations in the last decade are those of Eilat Mazar (“palace of David”) and Ronny Reich and Eli Shukrun (Warren’s Shaft, Siloam Tunnel, Pool and Spring Towers, Pool of Siloam). According to these excavators, the biblical accounts are essentially supported by the archaeology. According to Israel Finkelstein, an archaeologist at Tel Aviv U., “all of the recent discoveries from Ir David are merely ‘Messianic eruptions in biblical archeology.'” Perhaps the article’s writer misunderstood him, but if not, it’s really a stunning statement by one who has received major awards for his archaeological contributions. More accurately, it is a foolish statement.

I shouldn’t be surprised, because this is the trend. The trend used to be (unfortunately) that when anything was discovered it was immediately connected to the Bible and claimed to “prove” the Bible.
This itself is foolish, as often errors in identification and dating were made. Proof was desired so badly that caution wasn’t exercised.

The trend now is the opposite. Scholars who distrust the Bible respond in knee-jerk fashion to deny any biblical connection regardless of the evidence. Is the discovery of the “Pool of Siloam” really a “Messianic erruption”? How so? I’ll tell you what it is – a massive and impressive reservoir that dates (no doubt) to the time of Jesus and is the area where ancient sources describe (photos). It doesn’t prove that Jesus healed the blind man there, and no one is claiming that it does prove that. But some scholars are apparently so scared of anything that may relate in any way to the Scriptures that they dismiss them with a passing insult.

Perhaps Finkelstein wasn’t referring to the Pool of Siloam, but only to the “palace of David.” Now, I am not certain that the monumental building that Eilat Mazar discovered was David’s residence. And Finkelstein isn’t either. But you wouldn’t know it from the way he talks.

“Because there was no floor discovered and no pottery assemblages or olive pits or seeds, the building could be from the ninth century or the eighth or the eighth, or from two minutes ago, there is no way to know.”

The article tries to spin this as Mazar and the sponsoring institution already having their minds made up. But no one has their mind made up more than Finkelstein, who published his elaborate theory in The Bible Unearthed. He argued, on the basis of the absence of evidence, that there was no great united monarchy in Jerusalem. Who has the most to lose? He does. Mazar’s discovery would pull the bottom card from his stack of cards. But the article doesn’t say that, and Finkelstein for certain doesn’t want to draw attention to that.

There is additional folly in the notion implied in this article that the sponsoring institution (which has right-wing views) could somehow change the discoveries in the excavation. It’s almost as if completely different things would be discovered if the dig was sponsored by a left-wing institution than if it was sponsored by the Shalem Center. Does anyone really believe that a respected archaeologist like Eilat Mazar would fabricate her findings? Does anyone really believe that if she did that she could get away with it? Archaeologists have voices and they have journals and they are not afraid to speak up.

Here’s a good rule of thumb for reading articles like these in the future: if the only nay-sayer is Israel Finkelstein, he can safely be ignored.

Somehow I’ve managed to avoid buying BibleWorks for all these years (using Logos instead), but now I see a new version has been announced. There are a lot of new features apparently, but the one of interest here are the satellite maps. In their words:

BibleWorks comes with a set of beautiful satellite maps that you have to see to believe! The collection includes a full set of editable site and terrain overlays for major locations in Israel and Egypt, along with detailed overhead and elevation data and a comprehensive list of archaeological sites. You can even create your own map views, select sites to display, annotate key locations and trace journeys or battle lines. 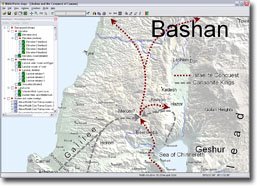 If you haven’t seen it already, take a look at my review of Electronic Maps for Bible Teaching. (And no, I still haven’t made it to doing Part 2.)

Update: The program is for sale from Rejoice Christian Software for $349 with free shipping. In my experience, they usually offer the lowest prices.

Go Dig a Hole and Crawl In It

There are two that I would particularly recommend, both for the sites’ biblical significance as well as the teams that are involved. Hazor and Gezer were two of the most important sites in ancient Israel, with mention in the ancient sources as early as the 2nd millennium B.C. Both are also noted as cities that Solomon fortified (1 Kings 9:15). This year however will be the first time that both sites are being excavated at the same time.

A new expedition is beginning at Gezer under the direction of Dr. Steven Ortiz, of New Orleans Baptist Theological Seminary, together with Sam Wolff of the Israel Antiquities Authority. They will be excavating from June 4 – July 7, are accepting volunteers for a minimum of 2 weeks. Ortiz is a well-trained archaeologist who is also a committed evangelical believer. I expect that the excavation team will include many believers, making it a better option for Christians than other digs (some of which are known for a more party-like atmosphere on the weekends). For more information, see GezerProject.org.

Excavations are continuing at the northern site of Hazor under the direction of Dr. Amnon Ben-Tor of Hebrew University. The evangelical group, the Associates for Biblical Research, is planning to participate for a third season. The dates for the ABR program (which includes touring) are June 27 to July 16. Ben-Tor is highly respected in the field, and Hazor is a site where much of interest has been revealed. If you are interested in participating with ABR at Hazor, see their website.

Both are recommended without reservation!

The Jerusalem Model is Moving

I’ve been talking about this for much of the last year in BiblePlaces newsletters, but now it’s in process. The Holyland Hotel model is leaving the Holyland Hotel, in route to the Israel Museum.

This recent Haaretz article certainly has a catchy first sentence, if you don’t realize what she is talking about.


At the end of January, the Temple Mount will be sawed into pieces and carted away. Not the real Temple Mount, of course, but its miniature model on the hillside next to the Holyland Hotel in southeast Jerusalem. The mountain and the temple compound built by King Herod are part of a model of Jerusalem in 66 C.E., on the eve of the revolt against the Romans that ended in the destruction of the city.

Last week I was at the museum and peeked over the wall and saw that parts of the city had been put in place. But it still looked like parts of the foundation were incomplete. It will take some time, I imagine. Hopefully it will be open before the summer tourists arrive.

The model is moving because of the construction of high-rise apartment buildings near it.
UPDATE: Ferrell Jenkins has a photo of the model being dismantled on his Biblical Studies Info Blog.
Share:
Leave a comment

The Jerusalem Post has a follow-up story with photos on the excavation of an apparently Jewish town near Jerusalem. What makes this one remarkable is that it was inhabited between the First and Second Jewish Revolts (70-132 A.D.), at a time when little is known about Jews in Judea archaeologically. One problem with this identification is that no mikva’ot (Jewish ritual baths) have been discovered, but this may be owing to the limited excavation area. In fact, the entire dig is being conducted on a traffic island on the ancient “Road of the Patriarchs” (Watershed Ridge). That makes the excavation six meters wide and 360 meters long. Alas, the site will probably be destroyed when the light rail is constructed in 2007.