Two things frequently bother me about news stories: what they say and what they don’t say. An example of this is the recent story about the Byzantine church discovered at Shiloh. The Telegraph has the only report of this discovery I’ve seen.

I wish they had not said:

Headline: ‘Church of the Ark’ found on West Bank

That’s a fine name, I suppose, except that there is no evidence that the ark was ever in this church or associated with this church. Yes, the ark of the covenant was at the same city where the church was found, but that was about 1,400 years before the church was built.

“The church dates to the late 4th century, making it one of Christianity’s first formal places of worship.”

I guess someone fears that this story will have no interest if it’s not labeled the “first” or “one of the first.” But it’s nonsense. Byzantine Christians built many churches in the Holy Land before this one, including the Bethlehem Church of the Nativity, the Jerusalem Church of the Holy Sepulcher, and the Mt. of Olives Eleona church. If you count last year’s “earliest church ever found” at Megiddo, the best the Shiloh church can claim is that it was built in the first hundred years of church building in the the Holy Land. I guess that doesn’t sound as exciting.

“The team at Shiloh is considering whether to dig under the beautiful mosaics that they have uncovered, in order to find traces of the Ark.”

“We have to decide whether to fix the mosaics here or take them to a museum,” said Mr Aharonovitch.

There are two problems with taking the mosaics to a museum: 1) The mosaics lose much of their significance to the visitor because they are ripped out of their context. It is much better to allow the visitors to Shiloh to see the mosaics where they were discovered. 2) It’s unlikely any museum visitor would ever see them anyway, because museum space is very limited and mosaic floors are very common. 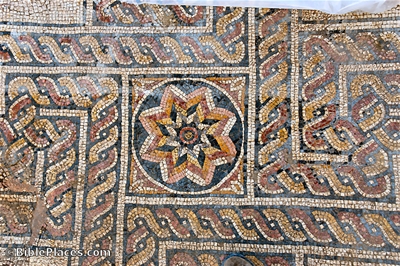 David Rubin, a former mayor of Shiloh, said: “We believe that if they continue to dig they’ll reach back to the time of the Tabernacle.”

This implies that archaeologists haven’t already discovered remains at Shiloh from the time of the Israelites. Indeed, they uncovered much from this time in the excavations of Israel Finkelstein in the 1980s.

I wish they had said:

This isn’t the first Byzantine church discovered at Shiloh. I suppose that it takes some of the drama away when you learn that about 50 yards away a Byzantine church sits that was excavated 80 years ago. A third church is less well-preserved but is known as the “Pilgrim’s Church.” It’s quite possible that there are other churches yet unexcavated.

The church is located next to and underneath the “Mosque of the Orphans” (Jame Yetim). This would help the knowledgeable reader to know the precise location of the church. The long-abandoned mosque appears to be untouched, but I wonder if there was some political motivation to not publicize the specific location of the excavation. 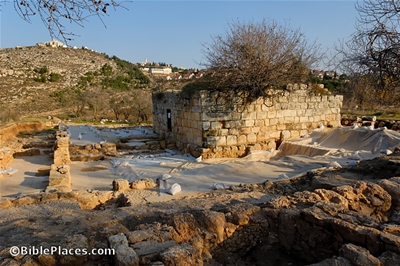 Excavation of Byzantine church around “Mosque of the Orphans”

UPDATE: Theoblogian has begun a translation of it. UPDATE Jan-2: Dr. William Varner and Brian Gee have provided this translation: Lord Jesus Christ, remember and consider worthy in your kingdom Eutonius your bishop and Germanus your holy regional bishop. Draw near to Him and be enlightened.)

There are some nice photos of the excavation by Eyal Dor Ofer here.