Some who think of me as a tradition-basher have asked me to comment on the recent discovery of the sarcophagus of St. Paul.  Personally, it’s of less interest to me because I don’t foresee much helpful information coming from it, unless, as Paleojudaica jokes, there’s an airtight container with a copy of his letters inside.

1. The sarcophagus was not found in a random location, but was located in the very place that tradition said it was.  Several years ago after a visit to the church, before they started digging, I noted that this altar is built over the traditional tomb of Paul.  That is where this sarcophagus was discovered. 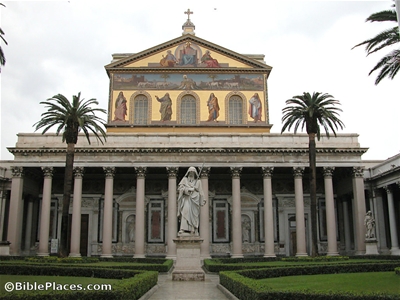 Church of St. Paul Outside the Walls

2. Constantine built the first church over the site in the 4th century.  That means that the tradition is a very old one.

3. After three years of digging underneath the altar, they found a sarcophagus.  That sarcophagus was found underneath a tombstone which had written, in Latin, “Apostle Paul, Martyr.”  This means that whoever wrote the tombstone (presumably in the 4th century, but I can’t be sure from the news reports) believed this was Paul’s tomb. 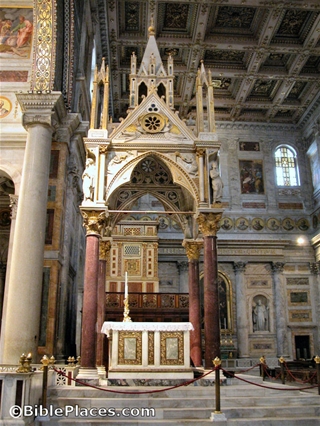 The sarcophagus was found below this altar.

4. So instead of connecting the dots from the 20th century back to the 1st, we simply have to evaluate the potential accuracy that the site was preserved correctly from the 1st century to the 4th.  This is the typical situation of holy sites in Israel as well; the earliest traditions usually date to the earliest Christian presence, which is in the 4th century.   How reasonable is it to assume that the memory of a site was preserved for up to 300 years?  My answer is that it depends upon the nature of the tradition.
For the tradition of the place of Jesus’ crucifixion, I doubt that Christians would have failed to pass this on accurately.  For the tradition of the place of Jesus’ birth, I have a little more trouble imagining Jesus pointing the site out to his disciples.  Sometimes our knowledge shows that a traditional site cannot be correct, as in the case of the feeding of the 5,000 or the Transfiguration.  In the case of Paul’s tomb, I am unaware of any evidence that rules the church out as a possibility.  Would early Christians have remembered the site of Paul’s beheading?  My guess is that they would.  It’s also important to note that there was the continuous presence of a believing community in Rome from the time of Paul’s death until Emperor Constantine’s construction of a basilica.

I think it’s quite possible that curiosity is going to push Vatican officials to open the sarcophagus.

Interior of Church of St. Paul Outside the Walls
For more information about the discovery, see the National Geographic news article or the story in the Telegraph.
All photos from the Pictorial Library of Bible Lands, Rome volume (Kregel, 2003); used with permission.
Share: