Nebi Samwil is not Mizpah

The May/June issue of Biblical Archaeology Review arrived in the mail yesterday (and it’s online here), and it includes an article entitled Nebi Samwil: Where Samuel Crowned Israel’s First King.

The article is primarily a means of making public the results of the excavations at the site by Yitzhak Magen from 1992 until 2003.  An article like this is to me a primary reason for the existence of BAR: it puts otherwise inaccessible material into the hands of the average Bible reader.  I’ve read a summary of Magen’s report elsewhere before, but the book is very expensive and won’t be at your local library.  With that commendation of the article and magazine aside, I’ll tell you why I think the central premise of the article, that Nebi Samwil is biblical Mizpah, is wrong.

The most detailed geographic passage in the Bible mentioning Mizpah is 1 Kings 15:17-22.  In the story, the northern king Baasha takes Ramah away from the Judean king Asa.  When Asa succeeds in getting Baasha to withdraw, Asa fortifies Geba and Mizpah.  By fortifying Geba, Asa ensures that Ramah cannot be taken by the road from the east.  By fortifying Mizpah (according to where nearly everyone except Magen locates it), he prevents Ramah from being retaken by the road from the north.  If Mizpah is at Nebi Samwil, Asa was an idiot.

Though this story is critical to the premise, the article only deals with it in a footnote.  There are two problems with Magen’s argument as presented in the footnote.  First, it wrongly identifies Gibeah of Saul (= Tel el-Ful) with Geba of Benjamin (= Jaba).  More importantly, it doesn’t make any sense what Asa gained by fortifying the two sites that Magen says he did (Nebi Samwil and Gibeah).

Baasha could simply come back, re-fortify Ramah, and Asa is back at square one.  But if you control en-Nasbeh (Mizpah) and Jaba (Geba), you control the two main arteries into Judah from the north and prevent Baasha from returning to Ramah. 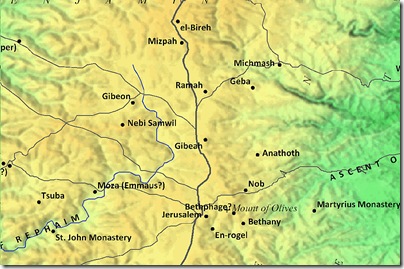 BAR has a map but it omits key data.
I made this using the free Bible Mapper.
As labeled, Gibeah=Tell el-Ful; Mizpah = Tell en-Nasbeh; Geba = Jaba

The archaeological evidence from the Iron Age at Nebi Samwil is so pathetic that it’s a wonder that Magen even tried.  Knowing that you can read the whole thing yourself, I don’t mind isolating a few clips to make the point:

We did not find any remains from the time of the Judges… [that is, the time when Samuel allegedly crowned Saul here!]
Interestingly enough, we found not a single structure or even a standing wall from this period.  On this basis, it might be tempting to conclude that the site was unoccupied at this time [Iron II]….  [He’s right; it is tempting…]
All this suggests caution in concluding that the site was not occupied until later.  [In other words, the natural conclusion is that it wasn’t occupied until later, but we found a few scraps of evidence that should be considered.]

I commend him for his honesty, but does he really want us to assume that because he found a few Iron Age seal impressions that the site was a major military fortress in the Iron Age?  We’re not idiots either.  (Compare these remains with the significant Iron Age evidence at en-Nasbeh and it’s an open-shut case.) 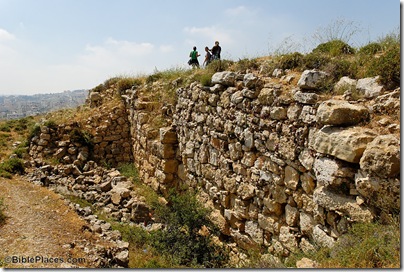 Here’s a reality I’ve seen time and again: archaeologists often identify their site with something biblical, even if the evidence is thin.  It’s a natural human response to want to be associated with something great, and if it’s archaeology in the land of Israel, a biblical connection brings lots of interest. Let’s face it: most of us wouldn’t read the article if it was all about Hellenistic buildings and a Crusader castle.  But here’s what this all means to you: be careful before trusting the archaeologist when he claims the site he is excavating is mentioned in the Bible.

12 thoughts on “Nebi Samwil is not Mizpah”