There is something important to this story, but it’s not what you might think.  What is exciting is that ancient Magdala is being excavated.  Perhaps that will increase our knowledge of this ancient city that was home to Mary Magdalene.  Perhaps it will result in the site being opened to visits by tourists.  Perhaps there will be silly sensational claims made before analysis is done – oh wait, that wish has already come true.  From the Telegraph, written by Nick Pisa in Rome:

Archaeologists have discovered vases of perfumed ointment which may have been used by Mary Magdalene to anoint the feet of Jesus.

This sentence should immediately clue you into the fact that this is a “made-for-TV” story, fashioned for maximum publicity without regard to truth.  You know this because:

1. It is quite incredible that of all the vases in the ancient world, the first ones the archaeologists find at this city are related to this biblical event.

2. Mary was from Magdala, but since there is no record that Jesus was ever in Magdala, his feet were not anointed there.  Perhaps, though, Mary carried the bottles back to her hometown.

3. Except that it’s hard to believe that Mary only poured some of the contents out and left the rest for archaeologists to find.

4. Most important to ignore in order to make this story fly is the fact that the Bible nowhere says that Mary Magdalene anointed Jesus’ feet.  A different Mary anointed him the week before his crucifixion (John 12:1-8).  And a sinful woman anointed him at the house of a Pharisee (Luke 7:36-50).  She is never named and Mary Magdalene is introduced by Luke two verses later (Luke 8:2) with no indication that this was the same woman.  Furthermore, the unnamed woman used an alabaster jar.

Did the excavators find an alabaster jar?  Mary Magdalene did plan to anoint Jesus’ body one Sunday morning, but she failed in her attempt (Mark 16:1-8).

The Italian team have been digging for several months at the ancient Palestinian town of Magdala – from where Mary gets her name.

In Mary’s day, Magdala was in the district of Galilee.  Today, its ruins are in the state of Israel.  It was not then, and is not now, a Palestinian town, except for those who wish to see the Jewish nation replaced by an Arab one.

The archaeologists of the Franciscan academic society Studium Biblicum Franciscanum found the unopened vases dating to the first century AD conserved in mud at the bottom of a swimming pool in Magdala’s thermal complex….

Speaking of the discovery Father Stefano De Luca who is leading the dig, said: “The mud-filled condition of the site allowed us to find these truly extraordinary objects, which were intact and sealed and still contain greasy substances.

“We think these are balms and perfumes and if chemical analysis confirms this, they could be similar to those used by Mary Magdalene in the Gospels to anoint the feet of Christ.

I have a revolutionary idea.  Analyze the contents, and then tell us what they are.

“The discovery of these vases is very important. We have in our hands the cosmetic products from the time of Jesus. It’s very likely that the woman who anointed Christ’s feet used these products, or ones similar in organic composition and quality.”

Frankly, this story could have been written long before the excavations.  They already knew the site was inhabited in the 1st century A.D.  All they needed was to find some vases, any vases, and they could say that these were related to Mary.  And the reporters would come, and the donations would flow. 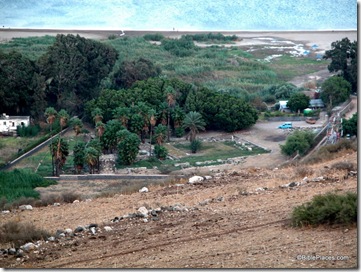 Magdala from west
UPDATE (12/12): An article in Italian is longer and includes a photograph.
Share: