A friend tipped me off that my summer travels this year would have me near Chautauqua Institution in western New York, the location of Palestine Park.  Originally built in 1874, the model of the land of Palestine (as it was then known) has been reconstructed and enlarged over the years to its present size of 350 feet long (110 m) at a scale of 1.75 feet to the mile (0.34 meters to the km).

The model blends into its surroundings and you don’t realize you’ve arrived until you’re standing in it.  This is a view of the area from the “north” with the edge of “Mount Hermon” visible on the right. 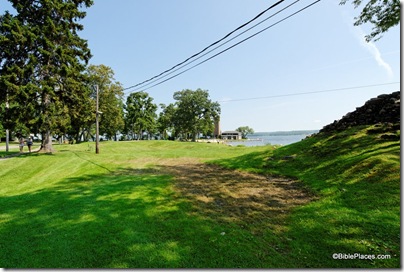 The best view of the model is from the top of Mount Hermon.  Lake Chautauqua stands in for the Mediterranean Sea, but since the park is on the lake’s western shore, the sun rises on the wrong side of this “world.” 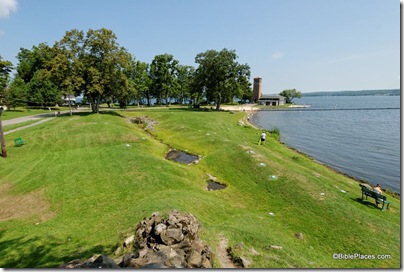 The model includes major landmarks such as Mount Tabor, the Hill of Moreh, and the Jezreel Valley, but I found it difficult to easily identify the physical features because of the uniform shade of the green grass. 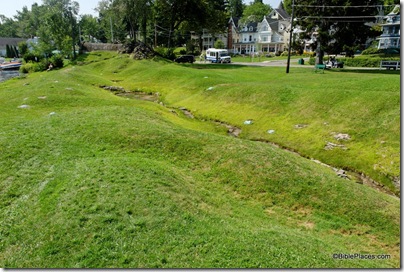 In the photo below, you can see the Sea of Galilee distinctly, and in the foreground the labeled sites are Nain (left) and Mt. Moreh (center). 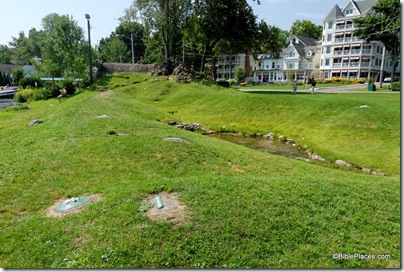 The two major lakes are the most easily identifiable features and both are shaped appropriately.  The Sea of Galilee (below) is surrounded by biblical cities (not exactly in the right places), including Tiberias, Magdala, Capernaum, Bethsaida, and Gergesa.  Perceptive visitors may wonder why the “Mount of Beatitudes” is placed on a high mountain on the lake’s west side.  This reflects a 19th-century view that Jesus gave the Sermon on the Mount at the place today known as Mt. Arbel. 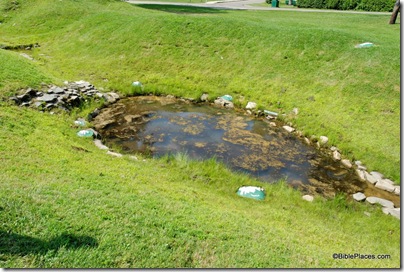 Every Sunday and Monday evenings a local pastor, allegedly in costume, gives presentations of the model using biblical stories.  Mounts Gerizim and Ebal, located under the boys, would provide an ideal place for many wonderful and important history lessons. 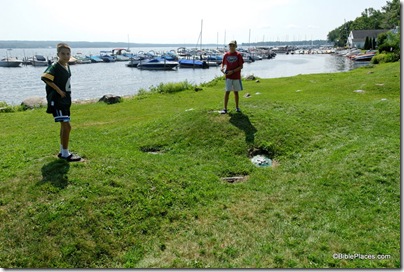 Jerusalem is uniquely marked on the model with a depiction of the (modern) Old City walls.  The model labels a mixture of sites from the Old Testament, New Testament, and later periods.

Approximately sixty sites are identified, including the Mount of Olives and Bethany (behind Jerusalem in the photo below). The model also includes the rugged hill country of Transjordan and labels sites including Macherus, Mt. Nebo, Ramoth-gilead, and Gerasa.  The large lake shown below is the Dead Sea.  For a better photo that includes the lisan peninsula, see yesterday’s post. 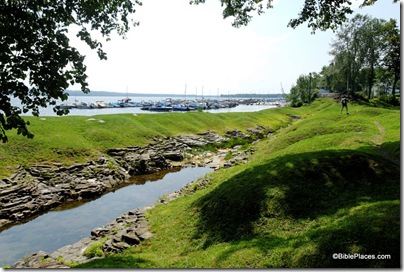 For more information about the premises where the model is located, you can visit the website of the Chautauqua Institution (but Palestine Park is ignored on the site).  The entrance fee for the morning was $16, which I felt was a bit unfair, especially since I only spent about 15 minutes at the model (but more than that walking in from the parking lot).  Wikipedia has a brief article about the place, and you can quickly locate the site on Google Maps here.  If you visit in the summer on a Sunday or Monday evening, you can join the free tour (weather permitting).  At other times , you can enjoy a self-guided tour with the assistance of either a cassette tape or a booklet.

A connection I only learned when writing this post is that the man who directed the creation of the park, John H. Vincent, co-wrote Earthly Footsteps of the Man of Galilee, one of the first works that I selected for the Historic Views of the Holy Land series.  He is listed on the title page as the “Chancellor of Chautauqua.”  There is a whole history of American interest in the Holy Land in the 1800s of which I have been ignorant.

If you have visited Palestine Park and have any observations or suggestions for potential visitors, feel free to comment below.

PrevPrevious2010 on Track for Tourism Record in Israel
NextSpecial Exhibit in Chicago: Inventions of WritingNext