A new exhibition at the Oriental Institute Museum at the University of Chicago will show visitors how scribes in the ancient Middle East invented writing, thus transforming prehistoric cultures into civilizations.

Writing is one of humankind’s greatest achievements. Writing took a variety of forms, many of which are displayed in the exhibition, “Visible Language: Inventions of Writing in the Ancient Middle East and Beyond” that runs from September 27 to March 6 at the museum, 1155 East 58th Street.

Exhibit curator Christopher Woods, Associate Professor at the Oriental Institute, said, “In the eyes of many, writing represents a defining quality of civilization. There are four instances and places in human history when writing was invented from scratch – in Mesopotamia, Egypt, China and Mesoamerica – without previous exposure to or knowledge of writing. It appears likely that all other writing systems evolved from the four systems we have in our exhibition.”

Among the items on display will be the earliest cuneiform tablets from Mesopotamia (today’s Iraq),
dating to about 3200 BC, which are on loan from the Vorderasiatisches Museum in Berlin. They have never before been exhibited in the United States. The pictographic signs, a precursor to writing, are part of a writing system that developed into cuneiform, a wedge-shaped script that was incised on clay tablets. Examples of that form of writing will also be exhibited.

A computer kiosk will include videos and interactive presentations that enhance the exhibit. One video will show visitors how ancient scribes wrote cuneiform on clay tablets and painted hieroglyphs on papyrus.

Interactive presentations will show how Oriental Institute scholars have been the first to use CT scans to reveal the contents of sealed clay “token balls” which are thought to be a precursor of
Mesopotamian writing. Another interactive will demonstrate how the newest photographic techniques allow previously illegible texts to be read. Others will show how ancient cuneiform signs changed over time, and how early letters gradually evolved into the letters of our Latin alphabet.

A “Just for Fun” portion of the exhibition will help visitors compare writing systems and to write their name and simple sentences in various scripts. From the computer station, visitor will be able to send an e-post card in hieroglyphs or cuneiform to their friends.

The exhibit is supported by a grant from Exelon Corporation, the Women’s Board of the University of Chicago, and private donors.

The museum is open Tuesday, Thursday through Saturday from 10 a.m. to 6 p.m.; Wednesday from 10 a.m. to 8:30 p.m.; and Sunday from noon to 6 p.m. Suggested donation for admission is $7 for adults, $4 for children. For additional information, go to www.oi.uchicago.edu. 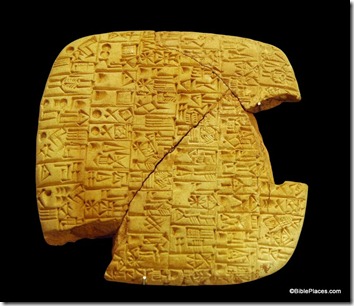