While conducting research for my dissertation (The Arsenal of the Hebrew Kings and Their Neighbors), I was able to follow up on a question that my advisor had once asked me: How were slings used in antiquity? In other words, what technique was used to generate the centrifugal force needed to propel the stone across the battlefield?

In general, the modern assumption is that the sling was twirled in a horizontal circle over the archer’s head. For example, Rivka Gonen in her 1975 book Weapons of the Ancient World states, “A stone was placed in the pocket [of the sling] and then swung round and round above the head; when sufficient centrifugal force had been generated, one of the thongs was released, discharging the stone at a high speed towards its distant target” (p. 42).

This technique was apparently used by the Egyptians in the 12th century B.C. There is a famous relief at Medinet Habu that depicts a battle between the Egyptians and the Sea Peoples during the reign of Rameses III. Within this relief, there are a handful of slingers. Positioned high in the “crow’s nest” of the Egyptian ships, these slingers are depicted in the act of twirling their slings over thier heads, as shown below. (Image taken from Nelson, “The Epigraphic Survey of the Great Temple of Medinet Habu,” in Medinet Habu–1924-28, p. 27). This also seems to be the technique used by a slinger depicted in a relief from Tell Halaf in northwestern Mesopotamia that dates to the 10th or 9th century B.C. 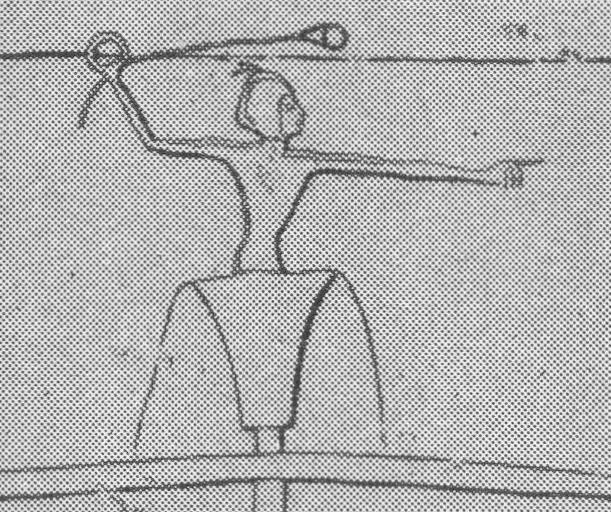 However, the slings in the reliefs of the Assyrian kings Sennacherib (705-681 B.C.) and Ashurbanipal (669-629 B.C.) are not depicted horizontally. In general, they are depicted as hovering vertically (or almost vertically) over the head of the slinger. An example of such an Assyrian slinger on the Lachish Relief can be seen here (see Fig. 30a). Elsewhere on that relief, a Judean slinger is also depicted with his sling in this position. When slingers use the twirling method described above, the sling is never in such a position, so another method must be proposed.

It would appear that during the late Iron Age the slings of Assyrians and Judeans were used by swinging the whole arm in a wide, vertical circle. Based on the consistent angle of the slings in various Assyrian reliefs, it appears that the slinger’s arm was swinging forward at the top of the circle. The slinger’s arm is always depicted as vertical or almost vertical, and the sling (when it is not depicted as directly in line with the arm) is almost always depicted as trailing slightly behind the arm, away from the slinger’s front side. So it seems that after the slinger loaded his weapon, he would move his arm down and backwards in a sweeping motion and would swing the sling vertically over his head. (Imagine a professional baseball pitcher using a sling to pitch a ball and you have the general idea.) This motion may have occurred only once or may have been repeated several times to build up momentum. At the crucial moment, one of the thongs was released and the projectile was launched toward its target.

So the archaeological evidence indicates that there were at least two slinging techniques used in the ancient Near East: a horizontal rotation over the slinger’s head, and a vertical rotation similar to an overhand pitch. If we stop to think about it, it should not surprise us that different slinging techniques developed at different times and in different places. For a tool as simple as a sling and stone, some diversity in its use was bound to occur.