Picture of the Week: Corinth Shop

How would being a tentmaker be an advantage to Paul while he was on his missionary journeys?  Archaeology provides some possible insights.

The picture of the week comes from Volume 11 of the revised and expanded version of the Pictorial Library of Bible Lands which focuses on Greece.  The photo is entitled “Corinth Shop on Western Side of Lechaion Road” (photo ID # tb031706129).  Click on the photo for a higher resolution. 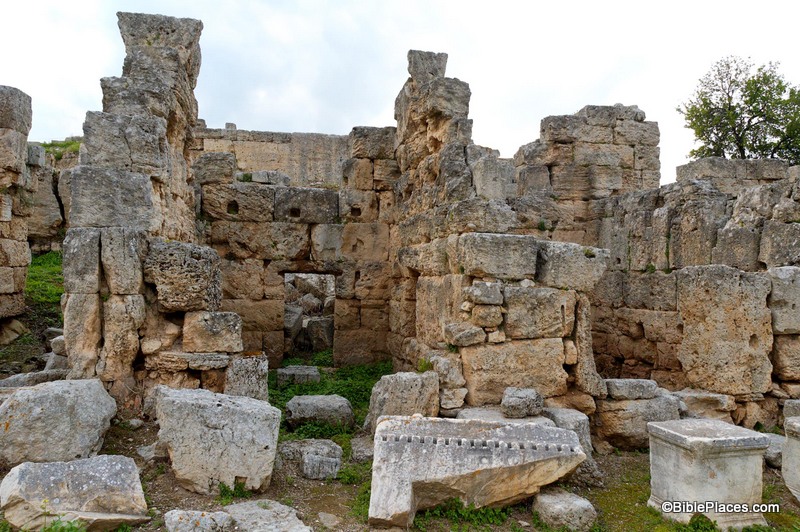 Paul stayed in Corinth for about a year and half during his second missionary journey (Acts 18:11).

Here is how the book of Acts describes the beginning of his time in that city:

After this Paul left Athens and went to Corinth. And he found a Jew named Aquila, a native of Pontus, recently come from Italy with his wife Priscilla …. And he went to see them, and because he was of the same trade he stayed with them and worked, for they were tentmakers by trade. And he reasoned in the synagogue every Sabbath, and tried to persuade Jews and Greeks. (Acts 18:1-4, ESV)

The term translated “tentmakers” could refer to craftsmen who were skilled in all sorts of leatherwork, not just in making tents.  As Paul worked alongside Aquila and Priscilla, they may have worked out of a shop such as the one shown in this picture.  Here they would have made leather goods, repaired leather items, and also sold their wares to the public.  Shops such as this were located along the Lechaion Road in Corinth as well as in the North Market.  However, it should be stressed that the exact location of Aquila and Priscilla’s shop (assuming they had one) cannot be determined.

Jerome Murphy-O’Connor, in his book St. Paul’s Corinth: Texts and Archaology, describes some of the advantages that Paul would have had if he worked in such a shop:

The way the participle and main verb are combined in 1 Thess 2:9, “working we proclaimed,” indicate that Paul did not separate work and preaching. Indeed, one of the advantages of leather-working was that he could easily do both; the environment was clean and pleasant, and the only sound the soft thump as the awl went in. …
From a shop in a busy market or giving on to a crowded street Paul had access, not only to co-workers and clients, but also the throng outside. In slack periods he could stand in the door and button-hole those whom he thought might listen …. It is difficult to imagine that his dynamic personality and utter conviction did not quickly make him a ‘character’ of the neighbourhood, and this would have drawn the curious, not merely the idlers but also those genuinely seeking.
The workshop also provided other advantages. Those attracted by his message could come in to question or chat as he worked. Married women with their attendants, who had heard of him, could visit on the pretext of coming to buy. In times of stress, when persecution or simple harassment threatened, believers could encounter him as clients. The workshop also brought him into contact with municipal officials. …
In sum, therefore, the workshop was a very astute choice for a missionary center, but it should not be imagined that Paul thereby had it easy. The average artisan of the period barely made ends meet … and in Paul’ case his wandering life made it difficult for him to build up the local reputation that outweighs competition. Long hours of exhausting toil were necessarily his lot, and how many times did he have to start all over again in another small shop in a strange city?

This and other photos of Corinth are included in Volume 11 of the Pictorial Library of Bible Lands and can be purchased here.  More information on Corinth and additional photos can be found on the BiblePlaces website here.  The quotation is taken from Jerome Murphy-O’Connor, St. Paul’s Corinth: Texts and Archaeology, Good News Studies, vol. 6 (Wilmington, DE: Michael Glazier, Inc, 1983), 169-170, and can be purchased here.