Recommended: The Land and the Book

One of my book sets that was acquired through some measure of trial and tribulation is William Thomson’s The Land and the Book. If you’ve done much reading of ancient customs and how they may illuminate the Bible, then you’ve certainly heard of this three-volume work if you haven’t read it yourself. You also may have enjoyed selections from it if you have The American Colony and Eric Matson Collection that was produced by us and published for Accordance.

Logos Bible Software has put the set in its Community Pricing which gives you the opportunity to get the full text for a low price. (The way that C.P. works is that a single bid of $20 is equal to two bids of $10, so feel free to bid low if you get a friend to join you.)

To give you a sense for some of Thomson’s writings, I opened up a few of the American Colony presentations and started reading. I very quickly found a number of quotes that relate very well to my recent study and teaching in Genesis.

For instance, when I was reading Genesis 18, I was struggling with the timeline. The three men show up “in the heat of the day,” eat a prepared calf, and then walk down to Sodom by evening. Apart from the fact that this makes it very difficult (i.e., impossible) to locate Sodom on the northern side of the Dead Sea, I was wondering how the calf could have been cooked so quickly. Thomson’s experience was helpful.

With the Bedâwin it is nearly universal to cook the meat immediately after it is butchered, and to bake fresh bread for every meal. Visit any Arab sheikh, for example, whose tent is now in the valley below us, and you will witness the entire process. A sheep or calf will be brought and killed before you, thrust instanter into the great caldron which stands ready on the fire to receive it, and, ere you are aware, it will reappear on a large copper tray, with a heap of bûrgûl, cracked wheat, or of boiled rice and leben, sour milk. In Cincinnati, a hog walks into a narrow passage on his own feet, and comes out at the other end bacon, ham, and half a dozen other commodities; at the sheikh’s camp, it is a calf or sheep that walks past you into the caldron, and comes forth a smoking stew for dinner. (2: 205)

Certainly the practice of killing a choice animal for visitors was similar in Abraham’s day as it was among Arabs in 19th century Palestine.

Not only is this true, but amongst the Bedâwin Arabs the killing of a sheep, calf, or kid in honor of a visitor is required by their laws of hospitality, and the neglect of it is keenly resented. They have a dozen caustic terms of contempt for the sheikh who neglected to honor his guest with the usual dabbîhah, sacrifice, as it is universally called—a name suggestive of the religious rite of hospitality as practiced in ancient times by the patriarchs, and frequently confirmed by a solemn oath and covenant” (2: 205).

I’ll close with one more, this one related to the story of Esau.

In my rambles about the outskirts of the town last evening I lit upon a company of Ishmaelites sitting round a large saucepan, regaling themselves with their dinner. As they said “Tŭfŭddâl”—oblige us—very earnestly, I sat down amongst them, and, doubling some of their bread spoon-fashion, plunged into the saucepan as they did, and found their food very savory indeed. The composition was made of the red kind of lentiles which we examined in the market at Jaffa; and I can readily believe, from the little experience I had of its appetizing fragrance and substantial taste, that to a hungry man it must have been very tempting” (2: 252).

I wouldn’t let that Thomson’s experience take anything away from your disdain for a son who despised the glorious promises of God, but it is certainly valuable to be able to “see” things more clearly.

You can bid on the Logos set here. There’s a free Google version here. There are many used copies available, but they come in abridged and 2-volume formats that can make purchasing confusing. You might also consider one of the volumes in The American Colony Collection, such as the fascinating Traditional Life and Customs. For $20, you get 600 photographs and hundreds of interesting quotations from Thomson and many other early explorers. 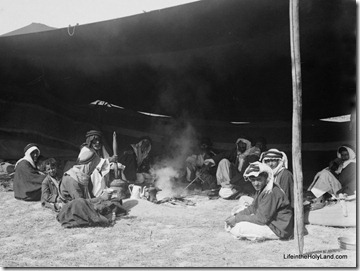