Last week, a link was provided on this blog to some fascinating 360-degree panoramas of the remains at Laodicea.  So our “picture of the week” comes from Volume 10 of the Pictorial Library of Bible Lands which focuses on Western Turkey.  The image captures the remains of the main street in Laodicea. 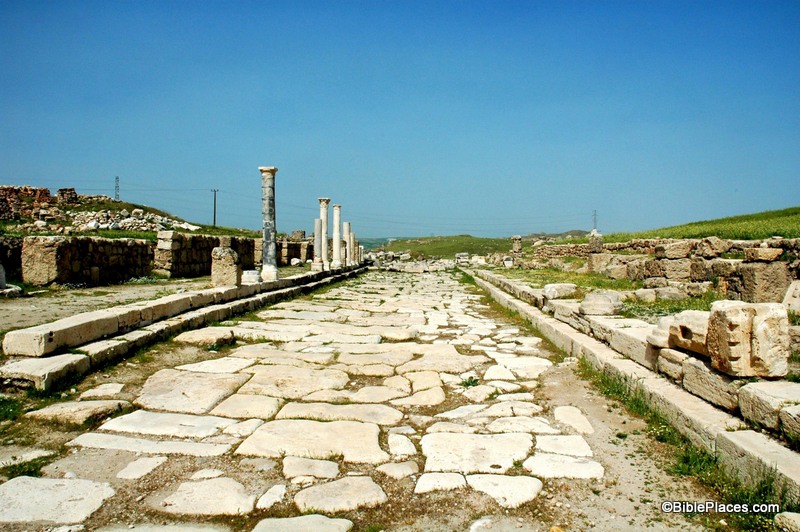 It is worth noting the biblical significance of this site, which is mentioned six times in the New Testament.  Paul refers to the city four times in his letter to the Colossians (Col. 2:1; 4:13; 4:15-16), and Jesus addresses the city in his Revelation to John:

14 “And to the angel of the church in Laodicea write: ‘The words of the Amen, the faithful and true witness, the beginning of God’s creation.
15 “‘I know your works: you are neither cold nor hot. Would that you were either cold or hot! 16 So, because you are lukewarm, and neither hot nor cold, I will spit you out of my mouth. 17 For you say, I am rich, I have prospered, and I need nothing, not realizing that you are wretched, pitiable, poor, blind, and naked. 18 I counsel you to buy from me gold refined by fire, so that you may be rich, and white garments so that you may clothe yourself and the shame of your nakedness may not be seen, and salve to anoint your eyes, so that you may see. 19 Those whom I love, I reprove and discipline, so be zealous and repent. 20 Behold, I stand at the door and knock. If anyone hears my voice and opens the door, I will come in to him and eat with him, and he with me. 21 The one who conquers, I will grant him to sit with me on my throne, as I also conquered and sat down with my Father on his throne. 22 He who has an ear, let him hear what the Spirit says to the churches.’” (Rev. 3:14-22, ESV.)

The cultural background of this passage is discussed in the PowerPoint notes included in the PLBL collection.  (As a side note, in my humble opinion, these notes are one of the most valuable features of the Pictorial Library.  They are a handy, concise source of reliable information about biblical sites.)  The notes in the Laodicea PowerPoint file state this:

1. The church in Laodicea was the last and southeasternmost of the Asian churches addressed by John in Revelation (3:14-22). It was the only one of the seven letters written to churches of Asia Minor bearing no commendation …

2. This letter to the Laodiceans is filled with local allusions which would have brought his message to life for the people of the city.

a. The church is said to be “poor,” contrasting with Laodicea’s role as the banking center of the province of Asia. Laodicea was famous for its wealth, changing money and minting its own coins since before the 1st century AD. Even when an earthquake destroyed their city in 60, the Laodiceans refused aid offered by Rome and rebuilt the city at their own expense.

b. John also says that they are “blind”; Laodicea was the chief medical center of Phrygia. Nearby a temple and great medical center/school was dedicated to the Roman god Men Karou (identified with the Greek god Zeus), famous for its production of eye-salve from “Phrygian powder,” said to cure weak eyes. The irony is that these people, who took great pride in their medical skill, were unaware of their own spiritual blindness.

c. The church is also said to be “naked,” a local allusion which relates to the major industry of the entire region: the manufacture and preparation of textiles. Laodicea’s glossy, black wool earned her a grand reputation, and her citizens wore black garments with pride, contrasting John’s advice to the Christians of the city to buy “white raiment, that thou mayest be clothed.”

So, like so many of the prophets in the Bible, Jesus uses the cultural environment of the hearers to drive home spiritual truths.  Understanding that cultural background leads us to a deeper understanding of the text.