Who Said This?: Archaeology and New Understandings of the Bible

What’s surprising about this statement is not as much what it says as who said it. You’re free to guess in the comments below or make any observations. I’ll include the author and title of the book in tomorrow’s roundup.

It may be sufficient to remind you that nearly every scholarly “breakthrough” which has helped to bring about a revolution in Biblical studies has been the direct result of archaeological discoveries, whether accidental finds or the products of deliberate excavations. The new materials which have brought about a new understanding of the Bible have come out of the ground—and barring a direct descent of the Holy Spirit, it is hard to see how there could be any other source of new information. Take for example the recovery of the cuneiform literature of Mesopotamia over the last hundred years, which has given us parallel accounts of the Creation and Deluge; which has illuminated the whole era of the Patriarchs; which has provided a radically new understanding of Israelite law; which has filled in the background of the period of the Assyrian and Babylonian destructions; which for the first time in modern Biblical studies has fixed the chronology of many Biblical events. Or we may note the recovery of the Egyptian records, which has thrown such light on the period of the Patriarchs, the Amarna Age, the Exodus and Conquest, and most recently in the Nag Hammadi manuscripts has promised a revolution in New Testament and Early Patristic studies in some way comparable to that occasioned by the discovery of the Qumran scrolls a few years ago. From Anatolia the recovery of the Hittite literature has rescued from obscurity a people known to us previously only from the Bible. 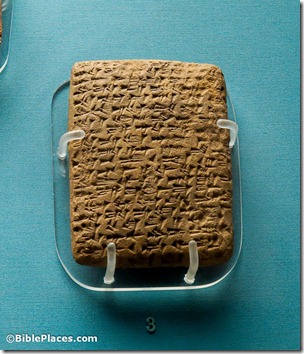 Amarna Letter from Yapahu of Gezer (EA 299),
now on display in the British Museum

32 thoughts on “Who Said This?: Archaeology and New Understandings of the Bible”