Picture of the Week: The Church of All Nations … Even the U.S.

Where can you see the American seal in Jerusalem? In honor of Independence Day in the United States, this week’s “Picture of the Week” will show you. 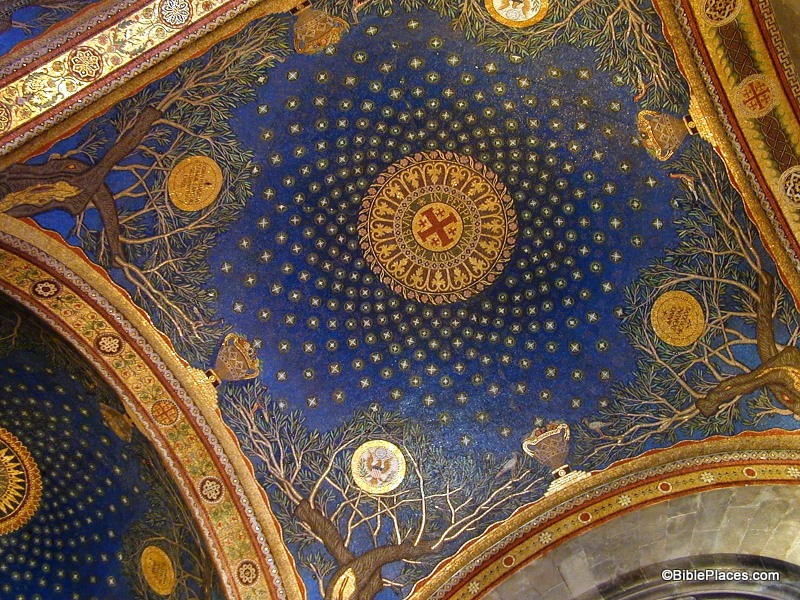 The photo above was taken in the Church of All Nations (also known as the Basilica of the Agony) on the Mount of Olives. The church is built over the traditional location of the place where Jesus prayed the night he was arrested. The modern church was completed in 1924, but it sits on the location of two earlier churches: one from the fourth century and another from the twelfth century.

The photograph shows the interior of one of the church’s twelve cupolas. The American seal can be seen at the bottom of the photo (click the picture to enlarge it). The ceiling of this church actually contains the seals or coats-of-arms of several countries, all of whom donated money to help construct the building. Argentina, Belgium, Brazil, Canada, Chile, England, France, Germany, Italy, Mexico, Spain, and the U.S. are all represented.

In his book, The Holy Land, Jerome Murphy-O’Connor provides the following information about the church:

This church … built in 1924, is located on the traditional site of the garden in which Jesus collapsed. No one can be sure of the exact spot at which he prayed, but this limited area was certainly close to the natural route leading from the Temple to the summit of the Mount of Olives and the ridge leading to Bethany.

The present edifice … is the latest in a series of three churches. It covers ‘the elegant church’ (Egeria) built between AD 379 and 384 … on the site where the pre-Constantinian Jerusalem community commemorated the prayer of Christ. Willibald, in 724-5, is the last pilgrim to mention this church; it was destroyed by an earthquake some twenty years later. The Crusaders first built an oratory in the ruins which they later (c.1170) replaced by a church …. The fate of this building is unknown; still functioning in 1323, it was abandoned in 1345.

Additional information about the modern church (as well as additional pictures) can be found on the Franciscan Cyberspot here. A 360-degree image of the inside of the church is available here.

This photo and over 1,500 others are available in Volume 3 of the Pictorial Library of Bible Lands, which can be purchased here for $39 (with free shipping). Additional photos and information about the Mount of Olives is available here on the BiblePlaces website. This page on LifeintheHolyLand.com includes a photograph of the area taken in the 1890s before the Church of All Nations was built.

Excerpt was taken from Jerome Murphy-O’Connor, The Holy Land: An Oxford Archaeological Guide from Earliest Times to 1700, 4th ed. (Oxford University Press, 1998), pp. 128-129. The fifth edition of this book is available here.