Picture of the Week: Sheep with Tails

A few years ago while I was in grad school, one of my classmates did a presentation that included a discussion of sheep in the Ancient Near East. She learned something about sheep that surprised her very much … She was shocked to learn that sheep have tails!

It is a common practice in many parts of the world to remove a sheep’s tail while it is young. This is done to prevent “flystrike” where flies will deposit their eggs in “stuff” that gets caught in the tail which later causes serious health issues for the sheep. (I’ll spare you the gory details, but if you would care to learn more you can go here or here … just don’t read it while you’re eating.) Consequently, many people in the world have never seen a sheep with a tail before, including my classmate. So our picture of the week comes from Volume 17 of the Pictorial Library of Bible Lands and features … you guessed it … sheep with tails (click on photo to enlarge): 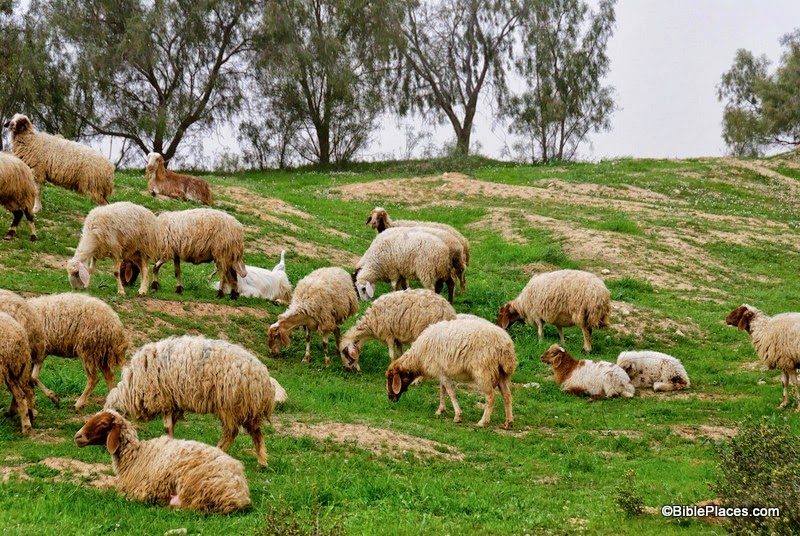 The tails on the sheep in that picture may be a little difficult to make out, so here’s an image from The American Colony and Eric Matson Collection that shows a sheep’s tail more clearly (you get two-for-one this week): 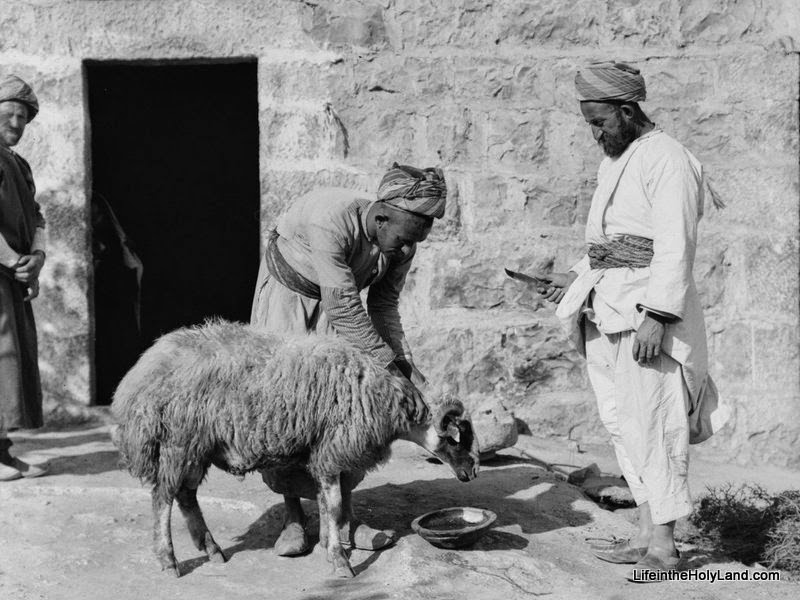 By the way, the sheep in that picture is about to be slaughtered (hence the knife).

So now that you have been enlightened that sheep even have tails, let’s turn to a biblical text where these tails are mentioned. In Leviticus 3, Moses details the process for making a peace offering to the Lord. In verses 6 through 11, he describes the steps involved if this offering is a sheep:

If his offering for a sacrifice of peace offering to the Lord is an animal from the flock, male or female, he shall offer it without blemish. If he offers a lamb for his offering, then he shall offer it before the Lord, lay his hand on the head of his offering, and kill it in front of the tent of meeting; and Aaron’s sons shall throw its blood against the sides of the altar. Then from the sacrifice of the peace offering he shall offer as a food offering to the Lord its fat; he shall remove the whole fat tail, cut off close to the backbone, and the fat that covers the entrails and all the fat that is on the entrails and the two kidneys with the fat that is on them at the loins and the long lobe of the liver that he shall remove with the kidneys. And the priest shall burn it on the altar as a food offering to the Lord. (Lev. 3:9-11, ESV.)

The photo annotations included in Volume 17 of the PLBL provides the following information on the subject:

Native to Israel, the fat-tailed Awassi sheep is white with a brown or
black head and feet. Their tails can weigh as much as 33 pounds on females and
22 pounds on males, and are similar to the humps of the camel in that they
store nutrients in order to sustain the sheep in times of scarcity. Together
with their high tolerance of heat and fast replacement of water, this enables
them to survive in the desert climate of the Negev.

So once again we see that a single picture can go a long way in illuminating the biblical text. When you woke up this morning, you may not have even known that sheep have tails! But now you can see how the whole animal, from head to tail, was involved in making a peace offering to God back when the Tabernacle and Temple were still standing.

The top photograph and over 1,000 others are included in Volume 17 of the Pictorial Library of Bible Lands, and is available here for $34 (with free shipping).

The bottom photograph and over 600 others are included in Volume 6 of The American Colony and
Eric Matson Collection, and is available here for $20 (with free shipping).

For additional pictures and drawings of sheep from the PLBL and HVHL collections, see here, here, and here.

3 thoughts on “Picture of the Week: Sheep with Tails”