On the Way to Shaaraim…


In past years, this blog has
discussed extensively the identification of Khirbet Qeiyafa, which has been
identified with Shaaraim by the excavators. I agree that Khirbet Qeiyafa should
not be identified with Shaaraim (see also below), but if Khirbet Qeiyafa is not
Shaaraim then where should we locate the biblical town?
Shaaraim is mentioned twice in the
biblical narrative, once in the Eshtaol district (Josh. 15:36, cf. Onom. 87.1) where
it is found between and again in association with the Philistine retreat
following the death of Goliath (1 Sam. 17:52). The text states that they fled
“as far as Gath and up to the gates of Ekron…on the way of Shaaraim, as far as
Gath and Ekron.” This latter context clearly puts the site in the vicinity of
the battle, which occurred in the Elah Valley between “Socoh and Azekah at
Ephes Dammim” (1 Sam. 17:1). Also, it should be noted that this reference does
not actually refer to the town of Shaaraim, but to the road that led to Gath
(Tell es-Safi) and Ekron (Khirbet el-Muqqana). Therefore, the text seems to
indicate that Shaaraim should be located west and perhaps north of the battle
with the toponym likely deriving from the routes that went through the Elah and
Sorek Valleys to Philistine Gath and Ekron (Na’aman
2008b:2–3).

Click on sites to see archaeological details and pictures


Garfinkel and Sanor, the excavators
of the recently concluded excavations at Khirbet Qeiyafa (2012), have revealed
one of the more intriguing ancient sites from the Early Iron Age IIA (i.e. 10th
century BCE). They have identified
Khirbet Qeiyafa with Shaaraim. This argument is based on three main criteria:
1) Shaaraim occurs after Socoh and Azekah in Joshua 15:35-36, 2) the site is
located directly above the presumed location of the biblical battle between
David and Goliath, and 3) the site produced two Iron IIA four-chambered gates
inside of a massive casemate fortification, which gave the name to the site
(Shaaraim = two gates) (Garfinkel and Ganor
2008; Adams 2009:47–66).
This identification has received a good deal of criticism from various scholars
who have offered different identifications for Khirbet Qeiyafa (Na’aman 2008a
–  Gob, before changing his mind in,
2012:88; see also Finkelstein and Fantalkin 2012:48; Galil 2009 – Netaim; Levin
2012b –  Ma’agal – interpreted as a
circular military fortress mentioned in 1 Sam. 17:20; Bolen 2012 –  Ephes Dammim, but it is possible that this is a
regional term).
Simply stated, Khirbet Qeiyafa should not be identified with Shaaraim. This is
due to the fact that the dual ending most likely does not mean “two gates” and
the site should be located further to the west/northwest (Na’aman
2008b:3–4; see also Elitzur 2004:282–290). This latter point means that
Rainey’s earlier identification with Khirbet es-Saireh can probably be ruled out on
geographical grounds (see discussion in 1975:69*; but see his later opinion that left Shaaraim unidentified 2006:147). On the other hand, Dagan’s suggestion of Khirbet
esh-Sharia, which is situated between Azekah and Khirbet el-Kheisum
(Adithaim?), would seem to fit this geographical requirement (1996a:139). Additionally, Khirbet
esh-Sharia would seem to present a compelling toponymic connection with
Shaaraim. The archaeological remains at the site are also in line with this
identification, as the site has remains from the Iron IIA (30 dunams**), Iron
IIB-C (40 dunams), and
Roman-Byzantine periods (Zissu
2000:77*–78*; Dagan 2000:site 55). 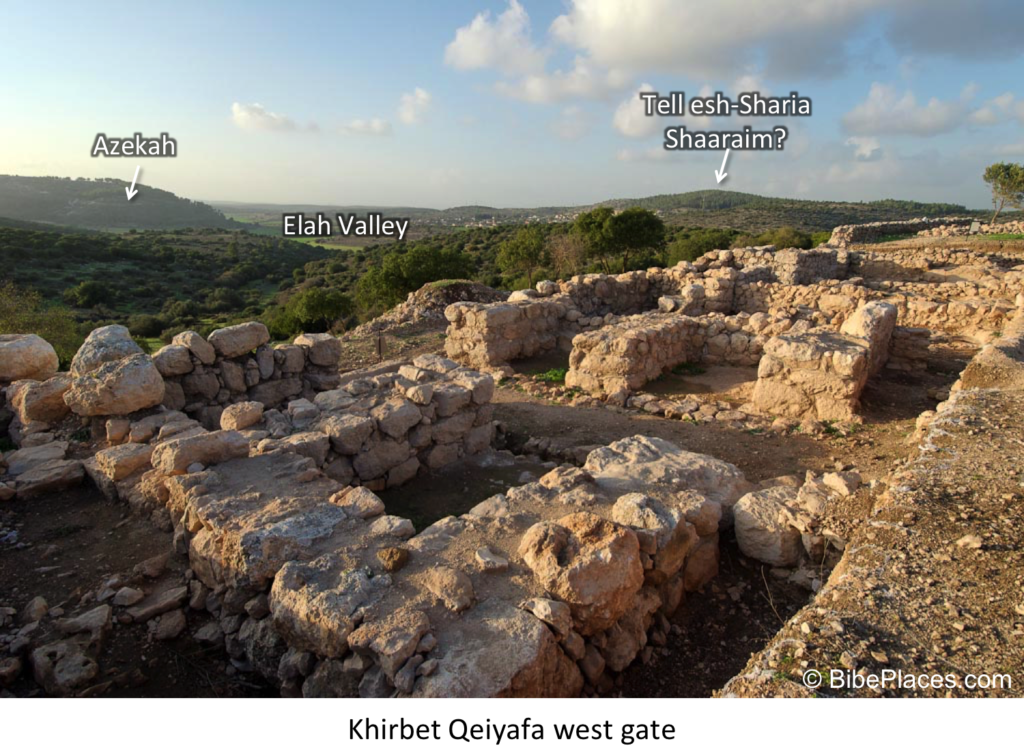 I disagree with Na’aman’s
conclusion that Khirbet esh-Sharia is not far enough to the west to match the
retreat of the Philistines (1 Sam. 17:52) (2008b:4–5). There are no known Judahite
sites to the west of Azekah (i.e. between Azekah and Philistine Gath) and it
seems that the Azekah-Tell Judeidah ridge formed a clear topographical border
between Philistine Gath and Judah (1983:10–11). Khirbet esh-Sharia sits very
near both the Elah Valley route to Gath and Ekron (Dorsey 1991:J6) and the “Diagonal Route” that
connects the Elah and Sorek Valley systems (Dorsey 1991:Sh2). In light of Na’aman’s
contention that Shaaraim was the “gateway to Judah” (2008b:4–5), it is difficult to
understand his hesitation to identify a site that perfectly suits his
definition.

Adams, D.L.
2009  Between Socoh and Azekah: the Role of the
Elah Valley in Biblical History and the Identification of Khirbet Qeiyafa. In Khirbet
Qeiyafa Vol. 1, Excavation Report 2007–2008, edited by Y. Garfinkel and S.
Ganor, pp. 47–66. Israel Exploration Socity, Jerusalem.

Dagan, Y.
1996  Cities of the Judean Shephelah and Their
Division into Districts Based on Joshua 16. Eretz Israel 25: 136–46,
92*.
2000  The Settlement in the Judean Shephelah in the
Second and First Millennium BC: A Test Case of Settlement Processes in a
Geographical Region. Unpublished Ph.D. Dissertation, Tel Aviv University, Tel
Aviv.

Dorsey, D.A.
1991  The Roads and Highways of Ancient Israel.
The Johns Hopkins University, Baltimore and London.

Finkelstein, I., and A. Fantalkin
2012  Khirbet Qeiyafa: An UnsensationalArchaeological and Historical Interpretation. Tel Aviv 39(1): 38–63.

Levin, Y.
2012  The Identification of Khirbet Qeiyafa: A NewSuggestion. Bulletin of the American Schools of Oriental Research(367):
73–86.

6 thoughts on “On the Way to Shaaraim…”