Two scuba divers made the find of a lifetime last month when they discovered a shipwreck dating to the 4th century AD. In what has been called the most extensive underwater discovery in Israel in 30 years, the divers found statues, anchors, and lumps of coins, all remarkably well preserved on the seabed near Caesarea. The following quotations and photos are from the IAA press release.

“Many of the artifacts are bronze and in an extraordinary state of preservation: a bronze lamp depicting the image of the sun god Sol, a figurine of the moon goddess Luna, a lamp in the image of the head of an African slave, fragments of three life-size bronze cast statues, objects fashioned in the shape of animals such as a whale, a bronze faucet in the form of a wild boar with a swan on its head, etc.” 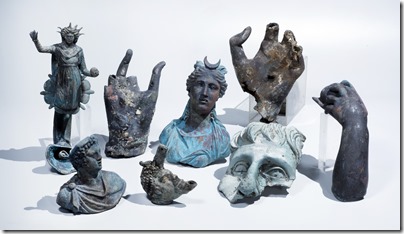 “One of the biggest surprises in particular was the discovery of two metallic lumps composed of thousands of coins weighing c. 20 kilograms which was in the form of the pottery vessel in which they were transported.” 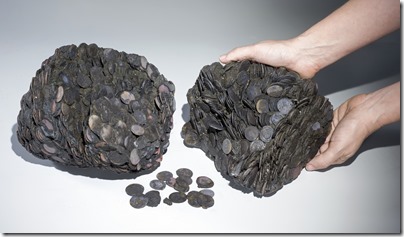 Two lumps of coins, together weighing about 45 pounds

“‘The location and distribution of the ancient finds on the seabed indicate that a large merchant ship was carrying a cargo of metal slated recycling, which apparently encountered a storm at the entrance to the harbor and drifted until it smashed into the seawall and the rocks.’ A preliminary study of the iron anchors suggests there was an attempt to stop the drifting vessel before it reached shore by casting anchors into the sea; however, these broke – evidence of the power of the waves and the wind which the ship was caught up in.” 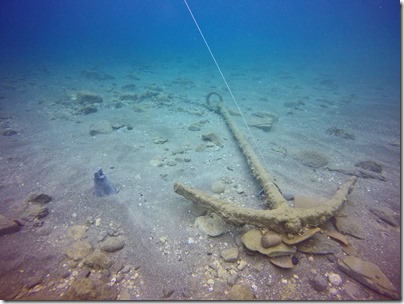 “Metal statues are rare archaeological finds because they were always melted down and recycled in antiquity. When we find bronze artifacts it usually occurs at sea. Because these statues were wrecked together with the ship, they sank in the water and were thus ‘saved’ from the recycling process.” 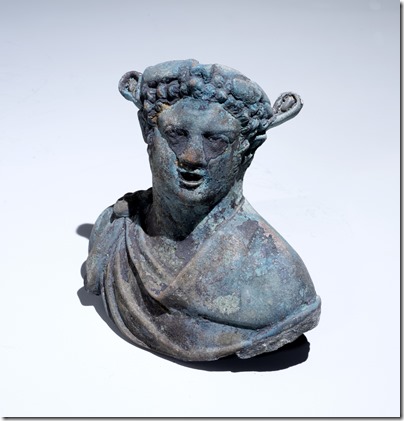 A figurine of Dionysus, the god of wine

“As soon as they emerged from the water divers Ran Feinstein and Ofer Ra‘anan of Ra‘anana contacted the Israel Antiquities Authority and reported the discovery and removal of several ancient items from the sea.” 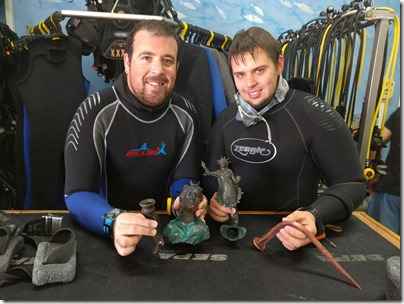 The divers, Ran Feinstein (right) and Ofer Ra’anan after the discovery. Photo by The Old Caesarea Diving Center

The IAA press release includes a 2.5-minute video. All of the high-resolution photos may be downloaded here. Unless otherwise credited, all photos are by Clara Amit, courtesy of the Israel Antiquities Authority.

The story is also reported by The Times of Israel, Haaretz, and others. 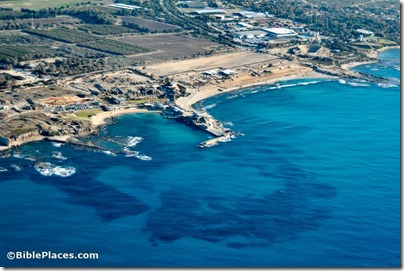 Caesarea harbor, aerial view from the west
Photo from the Pictorial Library of Bible Lands
Share:

One thought on “Caesarea Shipwreck Discovered”