Archaeologists working at Jerash (biblical Gerasa) have discovered part of a life-size statue of Aphrodite.

“American and Egyptian archaeologists have discovered a rare structure called a nilometer in the ruins of the ancient city of Thmuis in Egypt’s Delta region.” It was built in the 3rd century BC and used for 1,000 years.

British archaeologists have identified the remains of a 16- to 18-week-old mummified fetus that was found in Giza nearly 100 years ago.

The Antiquities Ministry of Egypt has completed a project to lower the groundwater at the Edfu Temple.

A plan has been approved that will remove all the mines around the traditional area of John’s baptisms on the Jordan River.

Haaretz (premium) visits the site of Tell el-Ajjul, once a prosperous Canaanite city south of Gaza but today at risk of complete destruction.

“Those who trust in the Lord are as Mount Zion which cannot be moved but abides forever” (Psalm 125:1). Wayne Stiles uses photos to explain what this means today.

Two archaeology students have crowdsourced images to create a VR reconstruction of the Mosul museum. The article includes a cool YouTube 360 video.

The Palestinian Museum opened this week in Bir Zeit, but it has no exhibits.

The enforcement of a new antiquities law is making it harder for black market antiquities to be sold in Israel.

Of 28 Egyptian obelisks standing today, only 6 are in Egypt. That’s one of many interesting facts about obelisks in a WSJ article that is based on a book by Bob Brier entitled Cleopatra’s Needles.

Allison Meier reviews the new exhibition in NYC, “Gods and Mortals at Olympus: Ancient Dion, City of Zeus.” The article includes many photos.

Charles Jones has recently updated the list of titles in JSTOR which focus on Antiquity. It now includes 243 titles.

If you have a passion for biblical geography, perhaps you would consider supporting Seth Rodriquez to go to Zimbabwe to teach future pastors about the land of Israel. This is a great opportunity to help others learn about what we love.

I’ll be traveling for a few weeks and the regular roundups will resume when I return. 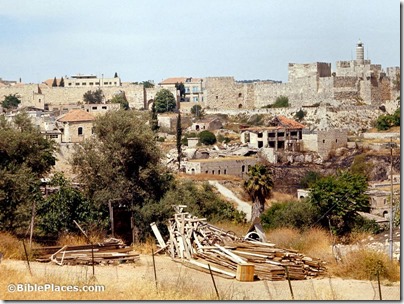 On this day 50 years ago, David Bivin took this photo while standing on the edge of no man’s land looking toward the Old City of Jerusalem, then occupied by Jordan. Photo from Views That Have Vanished.
Share: