Earlier this year, I took my first trip (hopefully of many) to Egypt. Normally I am interested in Bible history and geography, though recently, my attention has been drawn to ordinary, daily-life objects and cultural behaviors. For Bible times and places, it can be a little challenging to come up with photographs that illustrate these sorts of things. But that is why I found Egypt is so amazing. 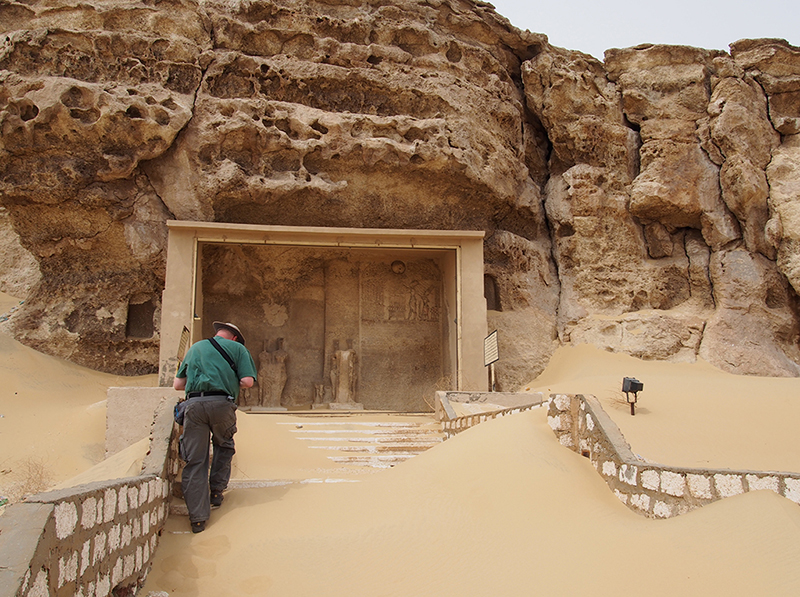 One of BiblePlaces.com‘s photographers on location in Egypt.

1. Tomb Models.
You can probably find examples of tomb models in most museums with Egyptian collections. These are ancient models that depict people in various occupations, most of them I think dating to the Middle Kingdom. Examples include herding cattle, storing grain, baking, butchering, sailing boats.

The models were placed in the tombs of nobles and depict the kinds of industries and activities that that particular noble oversaw during his lifetime. This photograph from the Egyptian Museum in Cairo shows carpenters at work. You can see them with their various tools: mallet, adzes, chisels, saw. Some of them are working on a sarcophagus. 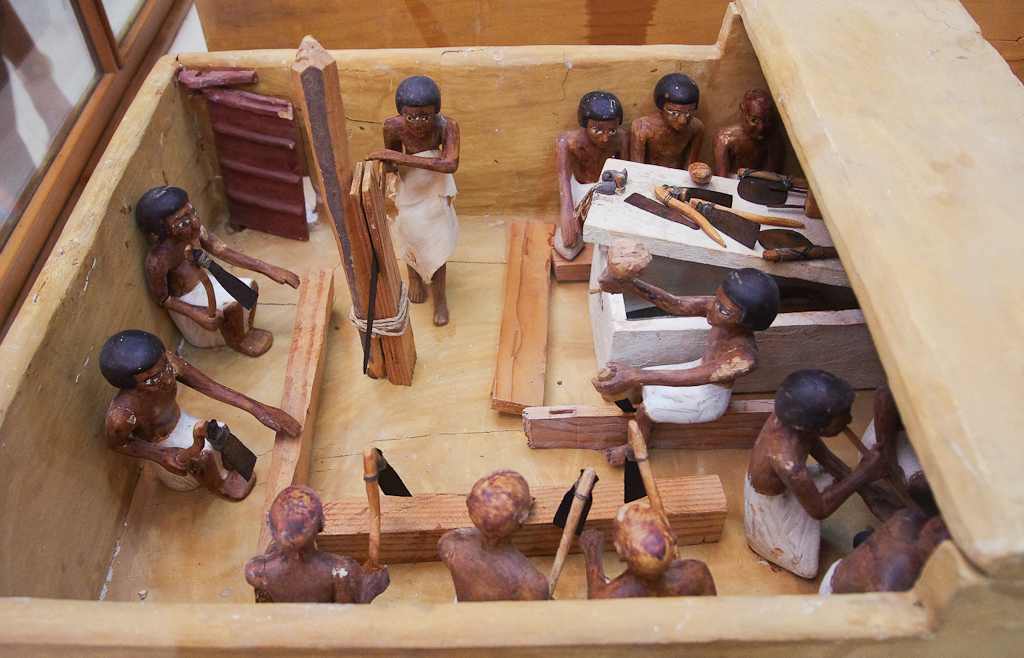 Here is a model granary also from the Egyptian Museum. You can see people carrying sacks of grain to a scribe who is recording the amounts. You can even see the hieratic writing on his tablet. The red and white rectangles below are chambers or bins for storing the grain. (Now re-read Genesis 41:47-49.) 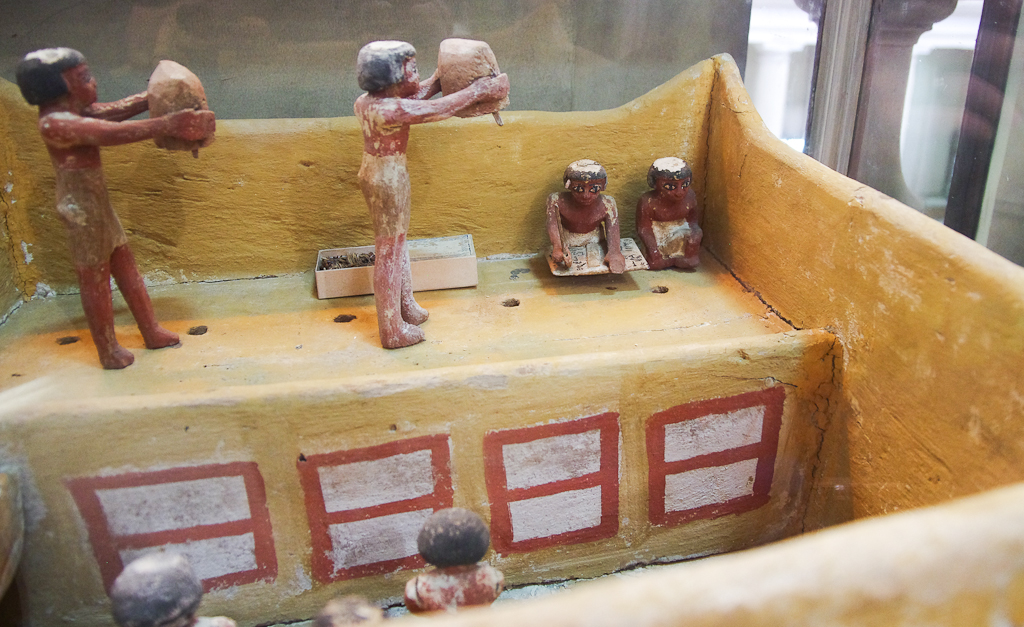 2. Tomb Paintings.
In royal tombs, you can see artwork of the king or members of the royal family interacting with deities, involved in funerary rituals, dealing with their enemies, and receiving tribute. In the tombs of nobles, however, the same sources for the models above, you can find elaborate paintings or reliefs of more mundane activities like cultivating fields, hunting, fishing, helping a cow give birth, and so on.

Here is a tomb painting from Beni Hasan that shows carpenters at work on a boat. Again, you can see the tools: axes, mallets, and adzes. Above them some carpenters are building furniture. One man is using a saw and another an adze. Between them are several other woodworking tools. 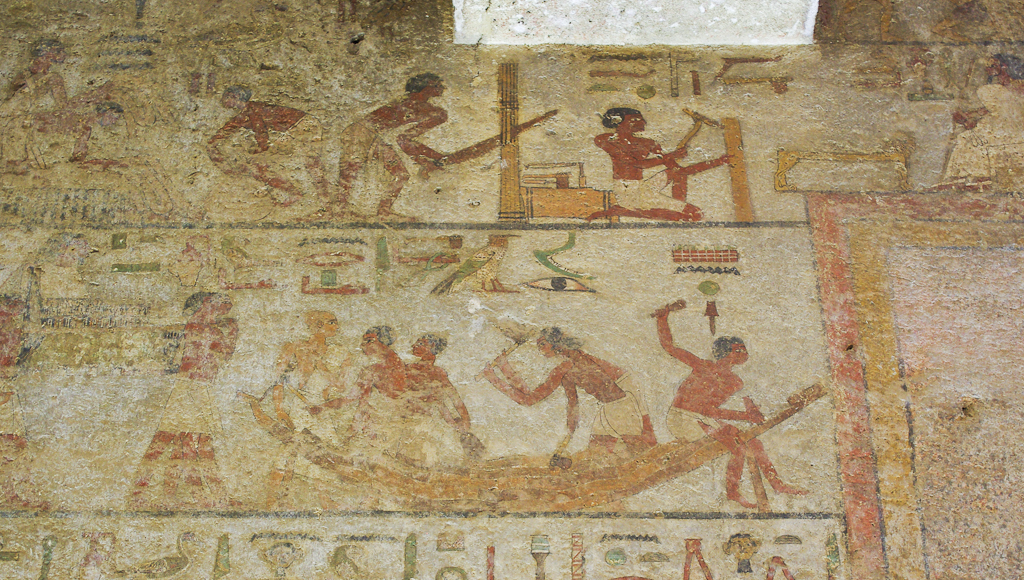 This photo, also from Beni Hasan, shows two men harvesting figs from a tree. There are three monkeys in the tree—apparently also big fans of the fruit. (Need help seeing the monkeys? Click here.) 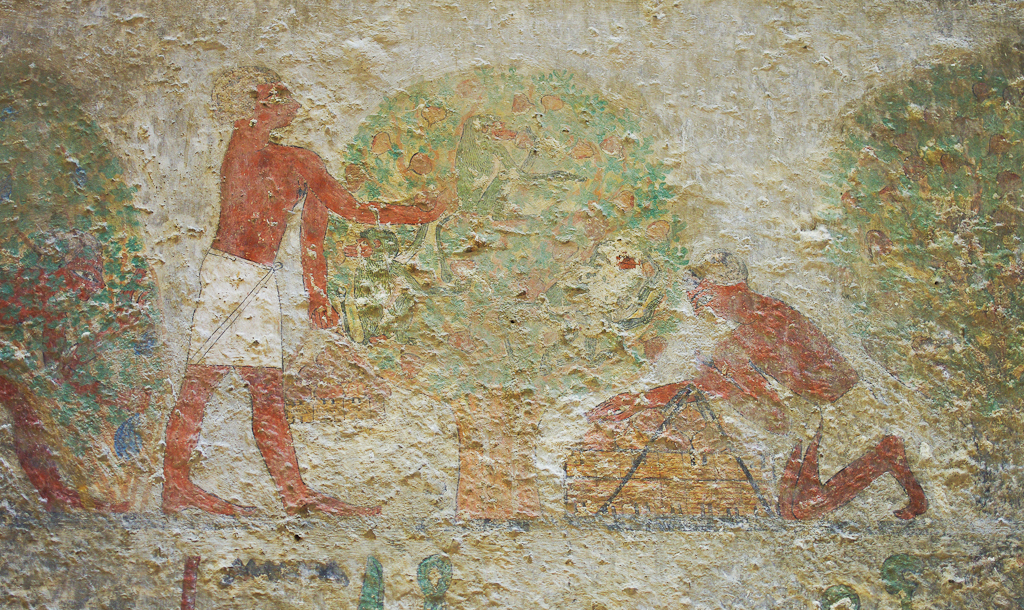 This scene from El-Kab shows the cycle of a grain harvest. In the bottom register, two plows are being pulled, one by oxen and the other by men. In between two men are tilling with hoes. Partially concealed by the oxen a man is sowing seed. In the middle register, men with sickles are reaping the grain. It must be hot work because the man in the center is stopping to drink from a jug. In the top register, they are bringing the grain in baskets to be threshed by oxen, then winnowed by hand. In the top left, a scribe is overseeing the storage of the grain (now shown). 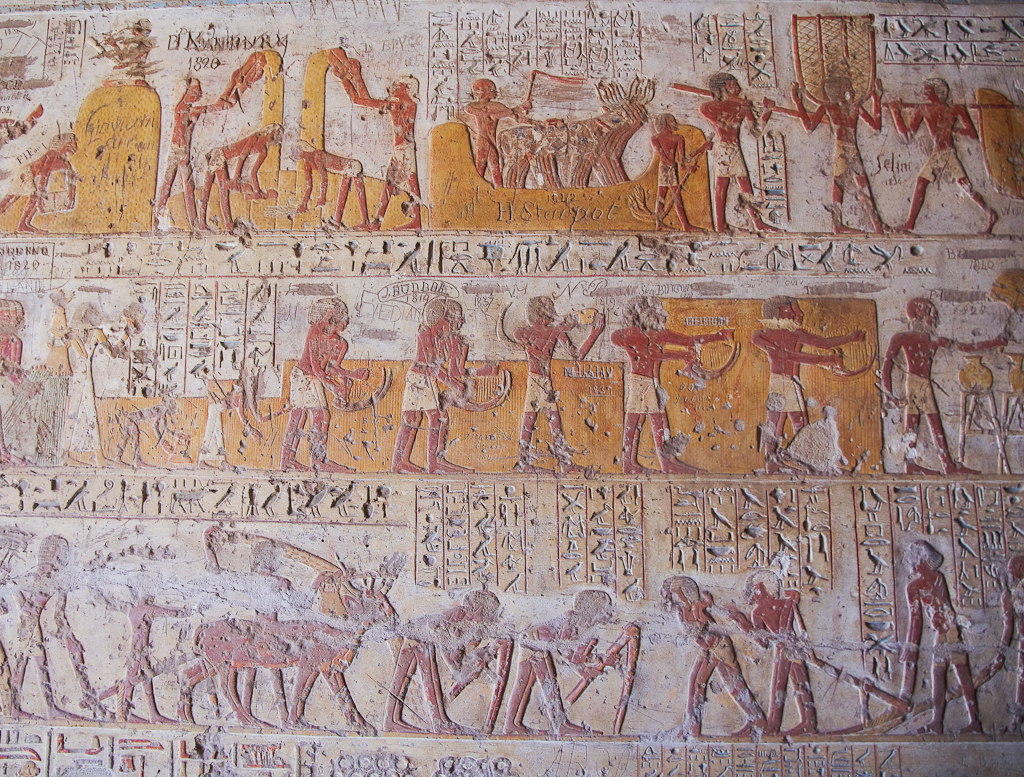 3. The Real Thing.
And if that were not enough, in Egypt you can see the actual objects themselves, thanks to the arid climate and the fact that burials were located in the desert beyond the cultivated land. Many items which are not preserved in other countries—such as textiles, food, wood—can be found in Egypt.

In keeping with the theme of carpentry, here is a wooden mallet. 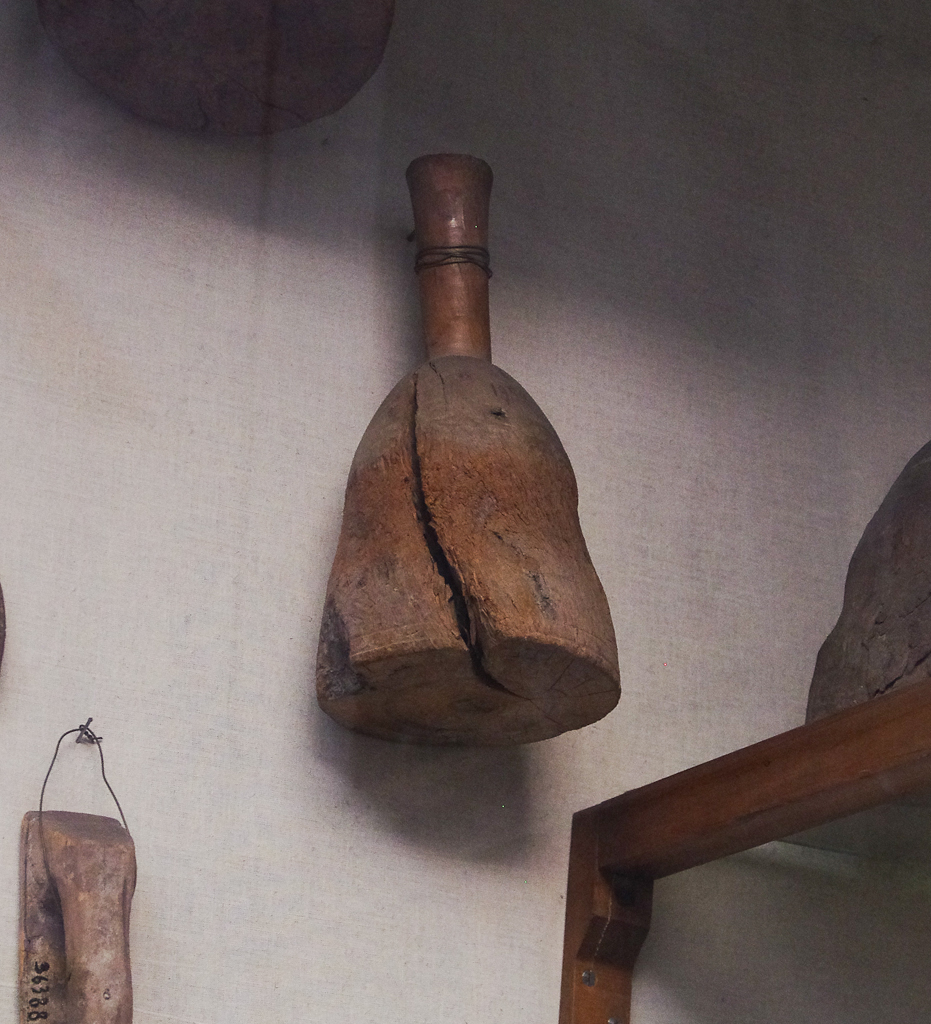 This case in the Egyptian Museum in Cairo shows many of the tools shown above: a wooden plow (with fiber ropes!), hand scoops for winnowing grain, and hoes. 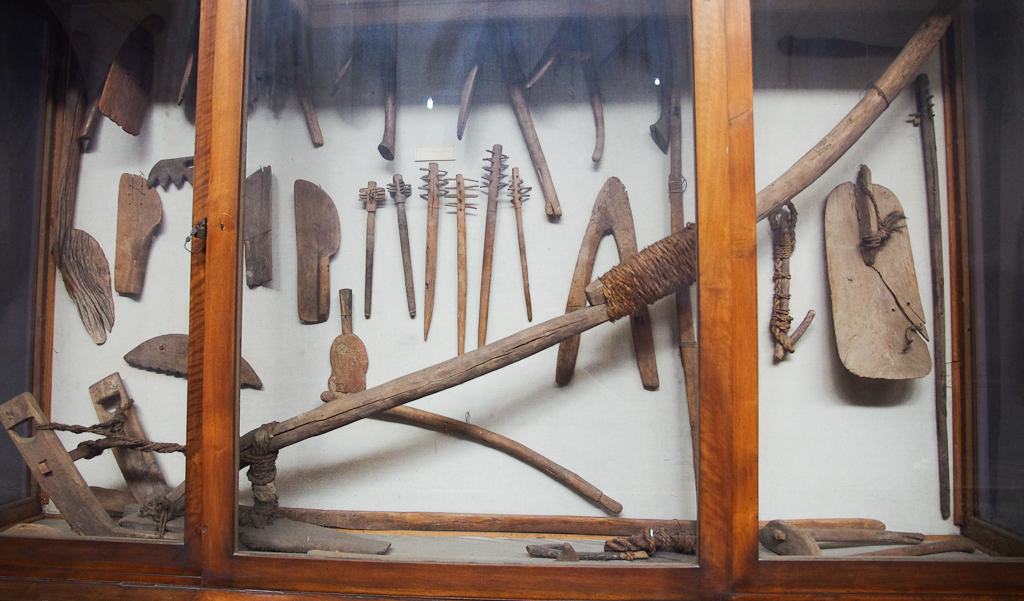 I might also make mention that, although not unique to Egypt, in the rural agricultural villages and fields, you can see traditional methods of farming, herding, butchering, etc. that in many cases do not appear all that different from their ancient counterparts.