“This atlas is an indispensable tool for historians concerned with ancient times. But it is also a source of great pleasure for the amateur, the lover of literature.”—Bernard Knox, Los Angeles Times Book Review

“Beautifully produced with an exquisite combination of scholarly precision and the highest level of cartographic art, this atlas is one of the greatest achievements in 20th-century Greek and Roman scholarship—and it probably will never be superseded.”—Publishers Weekly

It took twelve years and dozens of contributors to complete its 102 maps. In terms of historical periods, the atlas covers from c. 1000 BCE–640 CE (Archaic-Late Antique/in the Levant Iron Age II–Byzantine Period)—these periods are marked on the various maps with color-coded highlighting beneath the ancient sites. The maps only include ancient site names and regions, but do not include markings for historical events. This is both an advantage and limitation of the atlas, as is noted in the introduction by the editor. The advantage is that a scholar may supply their own markings for historical reconstruction—the limitation is that the lay person, in most cases, is not familiar with the historical events.

The print version of the Barrington Atlas is clearly a valuable reference work, as has been recognized for the last fifteen years. However, it is hampered by its price ($425 for the atlas only!) and its cumbersome size. On these two points the iPad version takes a great leap forward in improving the Barrington Atlas.

I observed three main advantages of the iPad app over the print version:

Comparison to Other Atlases:

These works deal with the same periods (Hellenistic-Byzantine), but they provide much more detailed discussions and maps related to the historical geography of Greco-Roman Judea, Samaria, Galilee (i.e., Palestine). These regions are covered in part 5 of the Barrington Atlas “Syria-Meroe” — specific maps 68–71. These maps are well designed and accurate, but limited in the amount of place names that they display.

In sum, while noting the limitations that I discuss above, I would definitely recommend this atlas for anyone interested in the Greco-Roman world… assuming that you own an iPad.

The Israel Antiquities Authority has released a free iPad app for kids ages 7-11 called Dig Quest: Israel. From the IAA:

The App transforms a kid’s iPhone or iPad into an archaeological tool and lets them play games to hone their skills, discover secret meanings, solve puzzles, and piece the past together like true archaeologists. Along the way they unlock ancient artifacts and create their own personal collection.

The games were developed in collaboration with the IAA’s team of pre-eminent archaeologists and researchers. As they play, kids get a feel for what archaeologists do as they experience the excitement of discovery and the creativity and skills involved in solving mysteries from the distant past. Players select between two dig sites – each has a unique game that puts the player in the driver’s seat and requires using different archaeological skills. At Lod, you clear the dirt to uncover an ancient Roman period mosaic and then play a fast-paced quiz-style game using your smarts and powers of observation to identify and classify the animals and objects on the mosaic. In the Qumran caves, you discover fragments of the 2,000 year-old Dead Sea Scrolls that you piece together in a puzzle game. Then you scan the scrolls to reveal their text more clearly, mirroring the advanced spectral imaging process performed by the IAA team in the laboratories. Each site features Discoveries for you to uncover that tell you more about the story of the excavation and the artifacts you find. You can collect the artifacts and discoveries in your own Collection box. 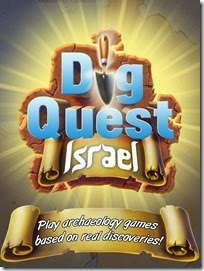 The app is now available from the iTunes store. A 1-minute YouTube video provides a preview of the fun to be had. An Android version is planned for the future. 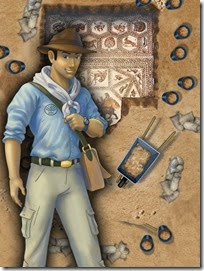