Shmuel Browns shows what it’s like to guide in the Jerusalem snow.

Ferrell Jenkins notes that his favorite single-volume Bible dictionary is now on sale for Kindle for $4.99.

Christopher Rollston has published a preliminary report on the Ninth-Century “Moabite Pedestal
Inscription” from Ataroth.

Aren Maeir gives his viewpoint on the ASOR Blog of how archaeologists should use the Bible. (I would argue that it is precisely the approach that he advocates that leads to the mess that biblical
archaeology is in.)

Princeton University Press is giving away 5 copies of the Barrington Atlas of the Greek and Roman World app this weekend (iPad only). 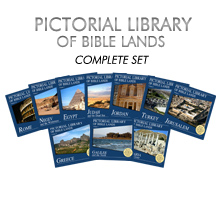 To increase significantly your odds of winning this week, you need only guess which individual volume has been the most popular (in terms of sales) over the last year.  We’ll give you a hint: it is one of the Israel volumes.  (You can browse their contents at these links: Galilee, Samaria, Jerusalem, Judah, Negev.)

We’ve also chosen this give-away to be the occasion of our first-ever online discount of the Pictorial Library.  Through Sunday only, there is a 20% discount.  That’s a savings of nearly $38.  As always, shipping is free in the US and every order will go by USPS Priority and will almost certainly arrive before Christmas.  (If you order and then win, we’ll give you a full refund.)

Click here to get the discount.  For the drawing, only one entry per person, please, but feel free to tell your friends, neighbors, pastors, and teachers.  After the drawing, all names and email addresses will be deleted.  The drawing will be held Sunday at 5 p.m. (PST).

UPDATE (12/19): Not one person correctly guessed that the best-selling volume is “Negev and the Wilderness.”  Most guessed “Jerusalem,” which is the second most popular (with Galilee in third place).  Perhaps “Negev and the Wilderness” sells more individual copies because purchasers interested in Jerusalem or Galilee may be more inclined to purchase the entire set.  Two winners were selected from all entrants.  Congratulations to Niek and Mitch.

This week’s free item is the Archaeological Study Bible, published by Zondervan in 2005.  This resource has a website of its own, with lots of information and extra features.  If you haven’t done so already, check out the maps page, with 14 free medium-resolution images for free download.

The Bible is available for purchase from Amazon for $31.49, but when I went to verify the price, I was surprised to see that it is available for the Kindle for only $4!  You don’t need to have a Kindle to read it, as software is now available for the PC, Mac, BlackBerry, iPad, and iPhone.  If you wonder how it works, you can download the “first chapter” free.  (I’m assuming by that they don’t mean Genesis 1.)  In the interest of serving you, I just bought the Kindle version myself, but I am not impressed.  I’ve never used a Kindle book before, so my expectations may be flawed, but you may want to test the free chapter before spending your money.  Among other things, navigating seems quite difficult.  Maybe a Kindle reader can weigh in below if I’m missing something.

For the give-away, shipping is limited this week to US addresses.  All names and email addresses will be deleted after the drawing on Sunday, at 5 pm.  Those reading this by email will need to click through to the post to enter.  Two winners will be chosen.

This week’s give-away is a treat for several reasons.  First, this resource is brand new.  When I received it in the mail a couple of weeks ago, it was not even listed on the publisher’s website.

Second, the value of this resource is much higher than any previous (or likely, future) give-away item.  The retail value is $375, though it is on sale until the 28th for $99.95.  Third, I have two copies to give away.

I would assume that most of my readers are familiar with The Great Courses.  This company finds the best professors to teach on popular subjects and then makes the audio and/or video lectures available for a fraction of the cost of tuition.  You don’t get credit, but you may save more than a thousand dollars from a comparable university course.

The latest course to be produced is entitled “The Holy Land Revealed.”  The instructor is Jodi Magness, professor at U of North Carolina at Chapel Hill.  She is well regarded for her historical and archaeological research, including her excellent book, The Archaeology of Qumran and the Dead Sea Scrolls.

The course is only available in video DVD format, and the set includes 36 half-hour lectures on 6 DVDs.  You can see a complete list of the lectures in the right sidebar on this page, but I’ll just note a few of particular interest here.

I’ve only had time so far to watch three of the lectures.  I chose one of Magness’ specialities:
“Discovery and Site of the Dead Sea Scrolls.”  When that finished, I continued into “The Sectarian Settlement at Qumran.”  (The third: “Synagogues in the Time of Jesus.”)  Because I’ve studied this subject in some measure (and read Magness’ book), I did not expect to learn much.  But I wanted to see how the information was covered, how visual aids were used, and how effective I would judge the course to be overall for people without graduate degrees in the field.  Overall, I would rate these lectures at 9 out of 10.  The information was solid (no surprise) and the visual aids were generally helpful (but why no photo of Cave 1 when she was describing the discovery?).  The presentation was good too, though my first impressions were that it must be hard to lecture directly into the lens of a camera.  I think when The Great Courses calls me up, I’ll request to have a live audience.  (I’m not holding my breath!)

Another quibble: the course is entitled “The Holy Land Revealed.”  This is a potentially ambiguous title.  I was expecting more of a geography-type course.  But this is clearly focused on archaeological discoveries that illuminate the land’s history.  Not only that, you should know that it is not evenly balanced across the periods.  This is not surprising if you know Magness’ expertise.  Naturally she is going to teach at greater length what she knows best.

What that means is that only eight of the lectures cover the Old Testament period.  Four are from the Roman, Byzantine, and Islamic periods, leaving twenty-four covering the Second Temple period.

That means that those who watch this course are going to get a great education in Pharisees, Maccabees, synagogues, Herod, and Jewish revolts.  But if your interest is exploring the archaeological world of the Old Testament in depth, you may want to wait for the next course.  I found on Magness’ university bio that she was preparing a 36-lecture course for The Teaching

Company entitled “The World of Jesus.”  I’m guessing that this is the same course, but they changed titles without modifying the content very much.  So if you think of this as a course primarily on “The World of Jesus,” I think you’ll be very satisfied.

There is much more information about the course here, and you can sign up for the free copies below.  The rules: one entry per person, deadline is Friday noon (PST), and after the winners are notified, all names and email addresses will be deleted.

This week’s free item is the ESV Bible Atlas.  I mentioned many of the great features I liked about this atlas when it was

released five months ago.  One of the stand-out qualities is the free CD included with the atlas with more than a hundred of the maps in electronic format.  A friend wrote recently to ask how to get the beautiful reconstruction diagrams (many by Leen Ritmeyer) without scanning them one by one.  Scanning is particularly difficult because of the diagrams’ large size and the seam in the middle.  (I’ve cut the binding off of a number of books in order to get good quality scans, but this does make the book less use-able.)

There is a good solution.  All of the ESV Bible Atlas drawings are included in the ESV Study Bible (plus a few extra).  The study Bible is now available in digital form in Logos Bible Software.  Thus for $40 you get all of the diagrams in ready-to-use PowerPoint format, plus all of the extensive study notes (which I use frequently in my study).

In other words, you get a wealth of resources with the combination of the ESV Bible Atlas (with CD) and the Logos version of the ESV Study Bible.

UPDATE: After writing the above, I stumbled upon a previous post which reminds me that the printed version of ESV Study Bible includes online access to the notes and diagrams.  Thus you can choose whether the printed or electronic Bible best fits your need, knowing that either way you get the diagrams in digital form.

For this week’s give-away, we have a free copy of the ESV Bible Atlas.  The rules: enter your name and email address by Monday noon (PST).  The winner will be contacted by email for a shipping address and all other names and email addresses will be deleted.

UPDATE (11/29): The True Random Number Generator at Random.org has selected #14.

This week marks the first give-away from BiblePlaces.com.  If all goes well, we hope to have about one a week through the end of the year.  For this first one, we have a beautiful 2011 calendar produced by Lamb & Lion Ministries (previously described here).  The calendar features our photos of gates of the Old City of Jerusalem.  Three winners will be selected from those that enter by Sunday 5:00 pm. 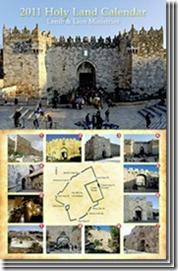