Picture of the Week: Cliffs Near Michmash and Geba

This week’s photo comes from Volume 2 of the revised and expanded edition of the Pictorial Library of Bible Lands.  It is entitled “Cliffs Near Michmash and Geba from Southeast” (photo ID #: tb092706140).  However, the name of the picture does not do justice to the thrilling events that took place here in the time of King Saul. 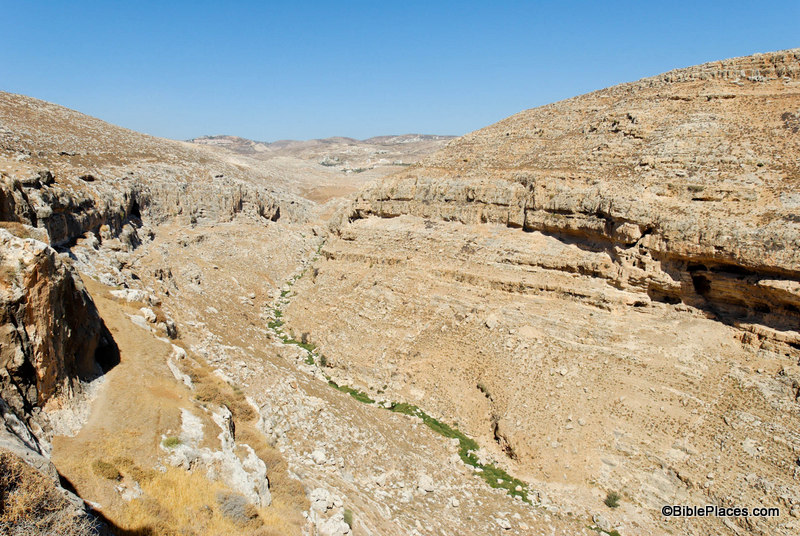 First Samuel 13 tells us that shortly after Saul was crowned king, the Philistines had penetrated deep into Israelite territory.  Normally the Philistines controlled only the coastal plains, but at this point in history they were attempting to gain control over the hill country as well.  They were encamped at Michmash in the territory of Benjamin, in the heart of Israelite territory (1 Sam 13:5).  Saul mustered his troops but suffered a defeat (1 Sam 13:6-7).  He was in dire straits and his character was put to the test as he waited for Samuel to arrive and offer sacrifice on behalf of the troops (1 Sam 13:8).  Saul cracked  under the strain and offered the sacrifice himself, incurring God’s judgment (1 Sam 13:9-15).  This chain of events only made matters worse and the Philistine army started spreading out from Michmash, gaining control over the heart of Saul’s kingdom (1 Sam 13:16-18).

This was the situation that Jonathan found himself in, yet unlike his father his character blossomed under such difficult circumstances.  First Samuel 14 provides us with the story.  The picture above shows the cliffs that separated the Philistine camp at Michmash and the Israelite camp at Geba.  The modern name for this valley is the Wadi Suweinit.  The cliffs on the left side of the photo led to Geba and the cliffs on the right to Michmash.  The Bible refers to these cliffs in this way:

The camps were only about a mile apart.  There is a pass between the two sites at the head of the valley (near the top center of the photo) where the main road was and still is today.  That strategic pass through the area was probably the reason the Philistine soldiers chose to camp at Michmash: if they camped close by, they could monitor and control the traffic through the pass.

However, instead of approaching the Philistine garrison on the main road through the pass, Jonathan decided to surprise the Philistines by scaling the cliffs.  Verse 13 tells us that Jonathan climbed up to the Philistine camp “on his hands and his feet.”  Amazingly, he takes only his equipment bearer with him: two soldiers against an entire garrison.  His reasoning for the attack is a testimony to his great faith:

“Come, let us go over to the garrison of these uncircumcised.  It may be that the Lord will work for us, for nothing can hinder the Lord from saving by many or by few.” (1 Sam 14:6, ESV.)

In the end, God rewarded Jonathan’s faith by giving him the victory.  He and his equipment bearer killed 20 soldiers and the rest were thrown into a panic (1 Sam 14:14-15), which provided the Israelites with an opportunity to win a great victory.  (You can read the rest of the story here.)  Many things have changed in the land of Saul and Jonathan over the last 3,000 years, but these cliffs still stand today as a silent witness of the faith and heroic deeds of Jonathan.

This photo is included in Volume 2, “Samaria and the Center” of the Pictorial Library of Bible Lands can be purchased here.
For more on Michmash, Geba and the pass, go here.

One thought on “Picture of the Week: Cliffs Near Michmash and Geba”