Picture of the Week: Mount Hermon and Caesarea Philippi

With the recent release of the revised and expanded version of the Pictorial Library of Bible Lands, I thought it would be helpful to start a series of posts that highlight some pictures from the collection.

With over 17,000 pictures in 18 volumes, there is an immense amount of material in there.  My purpose will be to feature one photo per week that can be especially useful in the classroom or in the church.  Although the PLBL collection contains many of the typical “postcard” shots of the usual tourist locations, its true value lies in the more unusual pictures that illustrate a particular feature of geography or archaeology that can be easily overlooked or that other photo collections fail to include.  It is these types of pictures that I would like to highlight and discuss.  Preference will be given to photos that were not included in the original edition of the Pictorial Library and that are not posted on the BiblePlaces.com website.

Our first photo comes from Volume 1: Galilee and the North, and is entitled “Mount Hermon and Caesarea Philippi aerial” (photo ID #: bb00140015). 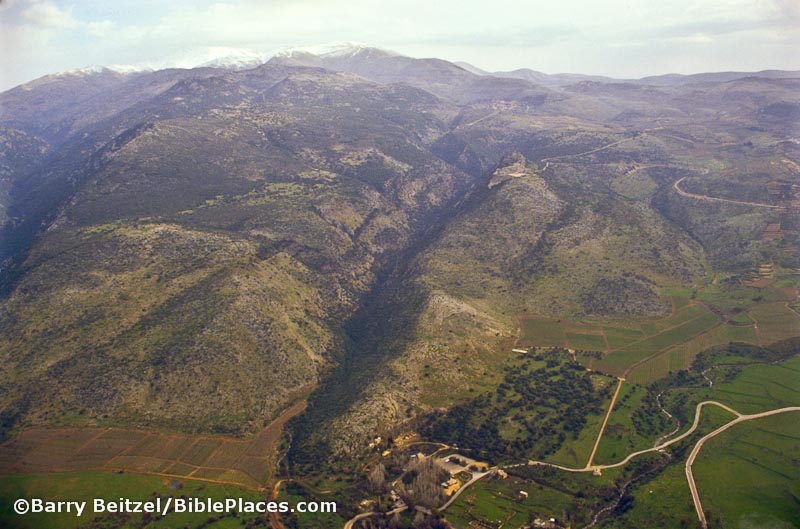 In this photo, the immense size of Mount Hermon can be clearly seen while it dwarfs the remains of the ancient city of Caesarea Philippi (located at the bottom center of the photo).  The ruins of the Crusader period castle of Nimrud can also be seen sitting on the ridge above Caesarea Philippi in the upper right quadrant of the photo.

This shot is helpful for a number of reasons.  First, it gives the viewer an appreciation for the massive size of Mount Hermon.  With its peak reaching an altitude of 9,230 feet (2,814 meters), it is almost three times the height of any other peak in the territory of ancient Israel.  Secondly, it shows the geographical relation between the castle of Nimrud and Caesarea Philippi.  Although I have visited both sites a number of times, the fact that they were both built on the same ridge escaped my notice until I saw this picture.  However, those two reasons are not why I decided to feature this picture in today’s post.

The third and most valuable reason is that it can be used effectively as an illustration when teaching or preaching on the Transfiguration of Jesus.  The Transfiguration occurs in Matthew 16:28-17:9, Mark 9:1-9, and Luke 9:27-36.  In each of those books, the event is immediately preceded by the discussion that Jesus had with his disciples where Peter declared, “You are the Christ, the Son of the Living God.”  Matthew and Mark tell us that this conversation occurred in the region (or district) of Caesarea Philippi (Matt. 16:13; Mark 8:27).

A few days later, Jesus took Peter, James, and John up on a mountain where He was transformed in front of them.  Matthew and Mark describe the location as “a high mountain” (Matt. 17:1; Mark 9:2), and Luke refers to it as “the mountain” with a definite article (Luke 9:28).  Looking at this photograph it is not hard to see which mountain the gospel writers had in mind.  If they were in the region of Caesarea Philippi and they went up a high mountain … indeed the most noteworthy mountain in the area … then it is not difficult to figure out which mountain was intended.  Over the years, some have interpreted the “mountain” in these passages as referring to Mount Tabor on the eastern edge of the Jezreel Valley, but given the geographical indicators provided in the text, Mount Hermon is a more likely candidate.

For a teacher or preacher, a photo such as this could be used as a dramatic backdrop to a discussion of the pivotal conversation Jesus had with His disciples in this region and the Transfiguration on the mountain.  By looking at this photo, the listener can easily picture the entire chain of events: the private conversation somewhere down in the valley, the physical exertion of Jesus and the chosen three as they climb the tall mountain, the glorious transformation of Jesus appearing as a bright spot somewhere on the mountain as His face and clothes shone brightly (Matt. 17:2), and finally the appearance of a shining cloud as God the Father spoke to the disciples (Matt. 17:5).  The use of a photo such as this can draw students and congregations into the story and engage their minds in a way that cannot be done with words alone.  The picture enhances the message.

This photo is included in Volume 1 of the Pictorial Library of Bible Lands and can be purchased here.

One thought on “Picture of the Week: Mount Hermon and Caesarea Philippi”