Picture of the Week: Phoenix

Continuing our series on “obscure sites” in the PLBL, today we come to a site so obscure that no biblical character ever visited this place, although it is mentioned in the book of Acts.

In an earlier post, we discussed the city of Myra where Paul briefly stopped as he was being transported to Rome. It was there that Paul and his escort of Roman soldiers boarded a grain ship that was traveling to Rome (Acts 27:5-6), but this ship was destined never to arrive. It made it as far as Fair Havens on the southern coast of Crete (Acts 27:8). By this time, the season was changing and winter was coming, but Fair Havens was not a good place to spend the winter because the wind blew right into the harbor. (See here for more information on that topic.) Although Paul warned them not to go any farther, the pilot, the boat owner, and the centurion decided to try to reach another city on the southern coast of Crete: the city of Phoenix (Acts. 27:9-12).

They never made it.

So Phoenix ends up on our list of obscure sites, instead of being trumpeted as the winter quarters of the Apostle Paul. Meanwhile, Paul and his companions were lost at sea and were eventually shipwrecked on a reef off the coast of Malta. On the map below, you can see Fair Havens (where they started) on the southern coast of Crete in the center of the picture, and you can see Phoenix (where they intended to land) to the west  of there (click on the image to enlarge). As you can see from the measurement scale, it was only a distance of about 80 kilometers (50 miles). 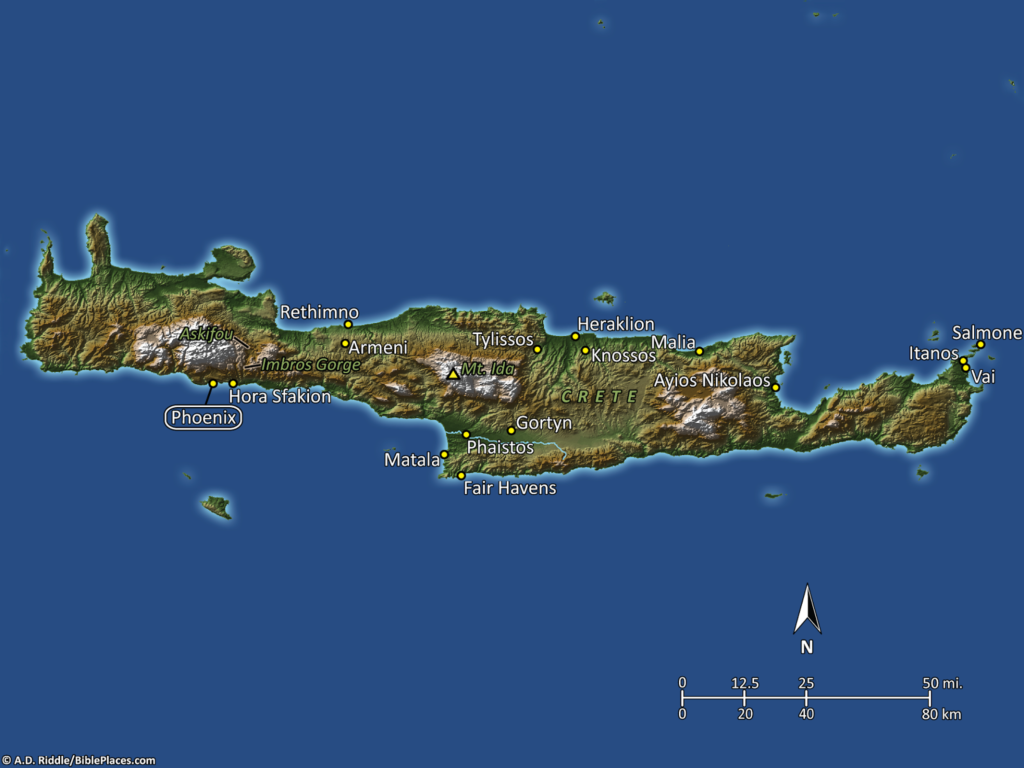 Here is the site of Phoenix as it appears today (click on the photo for a higher resolution): 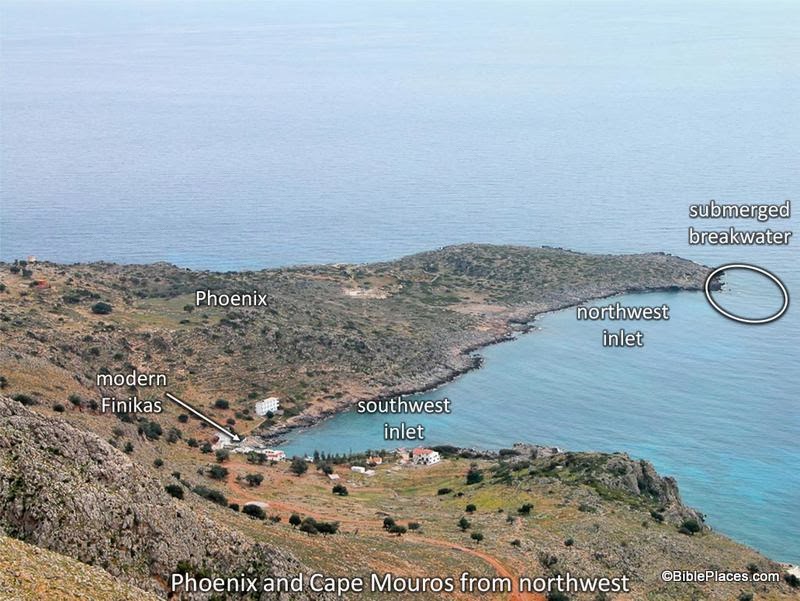 There is one fascinating detail of the description of Phoenix in Acts 27. Luke tells us it is “a harbor of Crete, facing both southwest and northwest” (Acts 27:12). As you can see, the ancient city of Phoenix was built on a promontory, which in modern times is called Cape Mauros. The modern village of Loutro uses a beautiful harbor on the east side of Cape Mauros, located just over the hill in the left side of the picture above. However, in ancient times, the inhabitants of Phoenix used the harbor on the west, and there is still evidence today that the ancient western harbor had two inlets. The one that faces southwest still survives today. The one the faces northwest is harder to see because the waterline is much lower that it was in antiquity and because a rocky reef that extends west from the tip of the cape would have extended farther in the first century than it does now. This reef would have helped to form one side of the northwest inlet.

In the picture above (taken from the PowerPoint presentation included in Volume 13 of the PLBL) the site of Phoenix, the reef, and the southwest and northwest inlets of the harbor are marked. For more information on this topic, you can consult the annotations in that PowerPoint presentation, the information posted here on the BiblePlaces website, or an article by R. M. Ogilvie in the Journal of Theological Studies, vol. 9 (1958), pp. 308-314. The geographical details of Luke’s accounts in the book of Acts have long been praised as extremely accurate. This is just one example among many that Luke knew what he was talking about.

This photo and map are available in Volume 13 of the Pictorial Library of Bible Lands and is available here for $24 (with free shipping). Additional photos and information about Phoenix are available here on the BiblePlaces website, as well as photos and information about these other locations on the island of Crete: Fair Havens, Gortyn, and Knossos.  For other posts in our series on “obscure sites in the PLBL,” see here.