Picture of the Week: Tel Ira

What if people in the future forgot the name of your city? Sound ridiculous? In archaeology, that is actually a common occurrence…

Continuing our series on “obscure sites in the PLBL,” our picture of the week comes from the Biblical Negev. About halfway between Beersheba and Arad are the ruins of a significant city from the time of Hezekiah. The site’s modern name is Tel Ira, and you can see its location in the center of the map below (click on the map for a higher resolution). 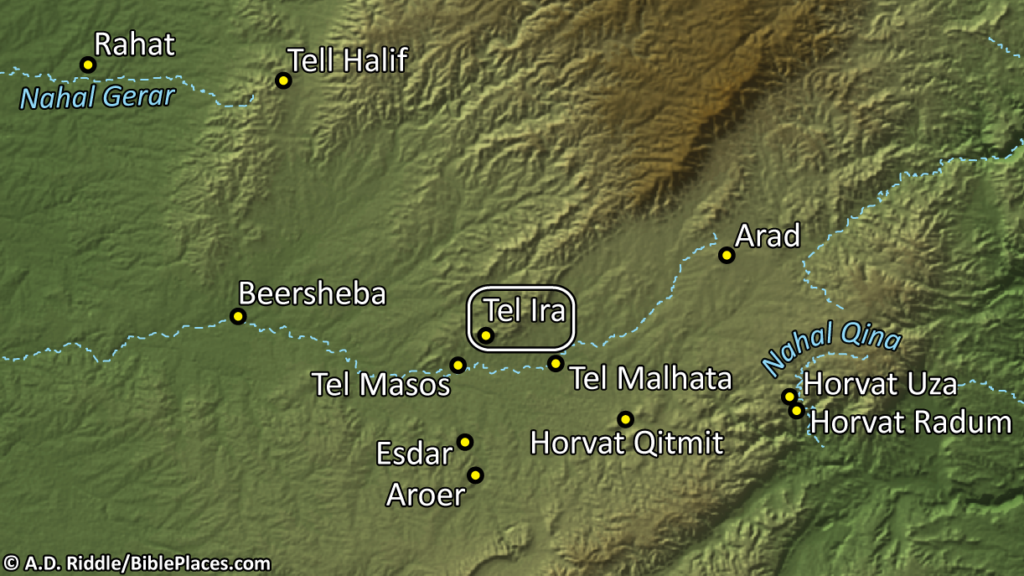 In the photograph below, you can see the remains of an Iron II casemate wall found at Tel Ira. The scorching terrain of the Negev can be seen in the background. 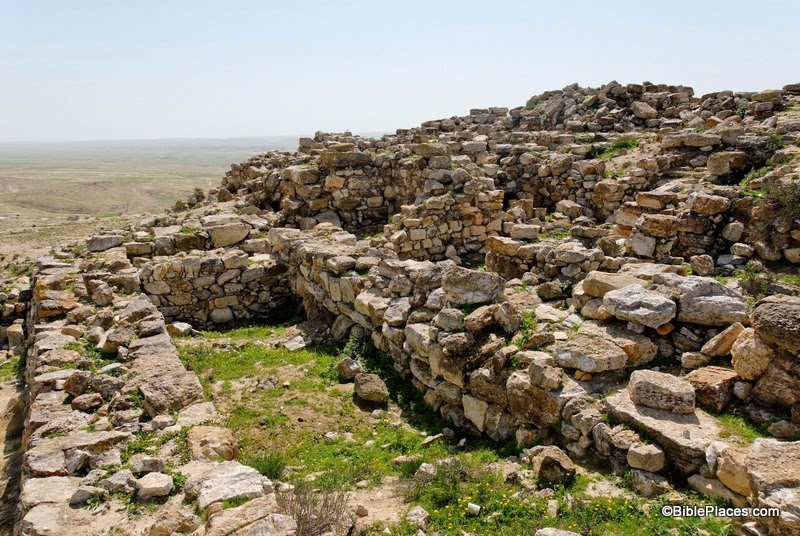 The following information is provided in the PowerPoint notes in Volume 5 of the Pictorial Library of Bible Lands:

Tel Ira was excavated from 1979 to 1987 by Itzhak Beit-Arieh and others. The six-acre site was occupied in the Early Bronze III, Iron II, Persian, Hellenistic, Early Roman, Byzantine, and Early Arab periods.

In the late 8th or early 7th century BC (approximately the time of King Hezekiah), the site was entirely surrounded by a solid wall that was 5-6 feet (1.6-1.8 m) thick. In the east wall excavators uncovered a gate with six chambers and two towers, similar to gates found at Hazor, Megiddo, and Gezer.

Excavators believe that Tel Ira was one of the most important sites in the Negev during the 7th century BC. It may have been destroyed by an Edomite attack. The ancient name of the site has not been determined.

A casemate wall was excavated near the six-chambered gate. Its total thickness is about 16 feet (5 m). The exterior wall (left in photo above) measures 5 feet thick (1.5 m) and the interior wall is 3 feet (1.0 m) thick.

The city wall was exposed on the complete circumference of the site.

Two statements in the third paragraph strike me as odd. The first is that this was “one of the most important sites in the Negev during the 7th century BC.” The second is: “The ancient name of the site has not been determined.” After we have dug at so many sites and learned so much about the biblical world, how could we not know the name of one of the most important cities within the territory of Judah during the period of the Davidic monarchy?

Years ago, Edwin Yamauchi wrote a book called The Stones and the Scriptures where he makes an interesting argument about how much we really know about the ancient world. He points out that our knowledge about the ancient world shrinks proportionately as we move from what existed in the historical period to what we have available for study today. He argues that out of everything that existed in antiquity, there is only a fraction of the material remains that have survived; of the surviving remains, only a fraction of the sites where this material is located have been surveyed or found; out of the known sites, only a fraction have been excavated; and out of the excavated sites, only a fraction have been published.

So when it comes down to it, we have only a fraction of a fraction of a fraction of information available to us, based on the archaeological record alone. Sometimes this deficiency can be helped through written sources from antiquity (such as the Bible) but often we are left with sites without names, as is case with Tel Ira. So this once prominent city of the Negev finds itself today classified as one of the “obscure sites” in the Holy Land.

This photograph and map, along with over 700 other images, are available in Volume 5 of the Pictorial Library of Bible Lands, and is available here for $34 (with free shipping). More photographs and information about Tel Ira can be found at the following websites:

2 thoughts on “Picture of the Week: Tel Ira”