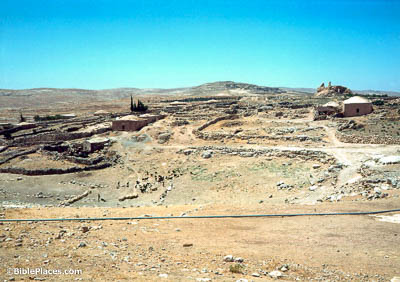 Now there was a man in Maon whose business was in Carmel (25:2).

Nabal apparently lived in Maon, but his sheep were located in the vicinity of Carmel. Carmel is located one mile (1.6 km) north of Maon, and both cities are visible in this south-facing photo. Carmel has been mentioned previously in Samuel as the place where Saul erected a victory stele after defeating the Amalekites (1 Sam 15:12). Saul’s victories, and the presence of this monument, may have affected the opinion of Nabal who worked in Carmel. This photograph was taken by David Dorsey in the 1970s. 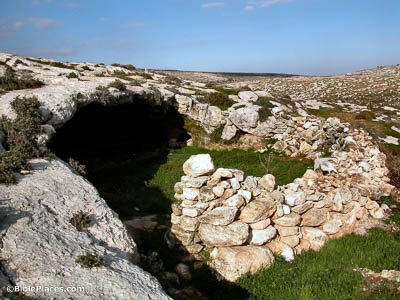 It was not uncommon for shepherds to build a wall around a natural cave to protect the sheep at night, as seen in this sheepfold at Michmash. The young man describes the protection afforded by David’s men as similar to having a wall of protection all day as well.

She also took five sheep already dressed, and five seahs of parched grain, and a hundred clusters of raisins, two hundred cakes of figs, and loaded them on donkeys (25:18).

Figs ripen from August to early October. When fresh they do not keep well or transport well, so they are often dried to preserve them. This photo includes a bowl of fresh figs and a small plate of dried figs. The term “fig-cake” is usually taken to be a number of dried figs pressed together into a round or brick-shaped lump. Why they might have been kept in this form is uncertain. 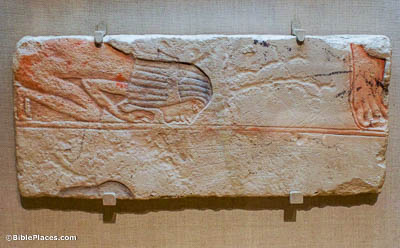 Abigail fell before David on her face and bowed herself to the ground (25:23).

Abigail’s action of bowing herself to the ground before David was a well-recognized way to show deference. The relief shown here depicts a woman with the same posture, likely in the presence of a high dignitary or even royalty, as evidenced by the large size of the foot of that individual in front of her. This relief was photographed at the Boston Museum of Fine Arts. 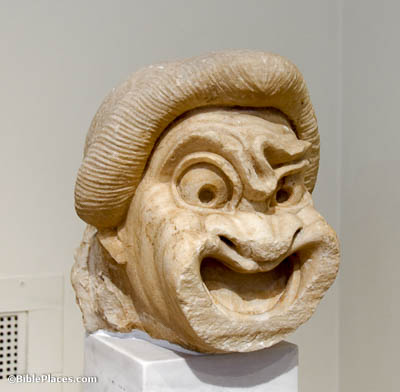 Abigail links the name Nabal (Heb. nabal) with the Hebrew word for foolishness, folly, or stupidity (Heb. nebalah), a word that sometimes carries an even stronger sense of willful sin, even sacrilege (cf. Gen 34:7; Josh 7:15; Judg 20:6). The idea is portrayed here by a later Greek theater mask that portrays the ridiculous visage of a foolish slave, one of the standard characters in Greek comedy. This photograph was taken at the National Archaeological Museum in Athens.