Paul's Argument from the Prophets 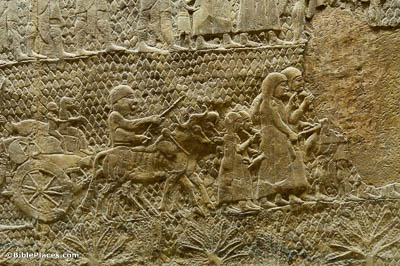 Seeking to establish their own [righteousness], they did not submit to the righteousness of God (Romans 10:3).

The defeat and exile at the hands of the Assyrians and Babylonians was the culmination of Israel’s failure to obey God. Israel’s failure pointed back to Adam’s failure in the Garden (e.g., Hos 6:7). Thus, Israel’s exile was a microcosm of humanity’s failure to secure their own righteousness before God. The scene pictured here is from a relief that the Assyrian king Sennacherib commissioned to celebrate the defeat of Lachish in 701 BC. This portion of the relief shows Judahite families being led away into exile. This occurred shortly after the northern kingdom of Israel was exiled. 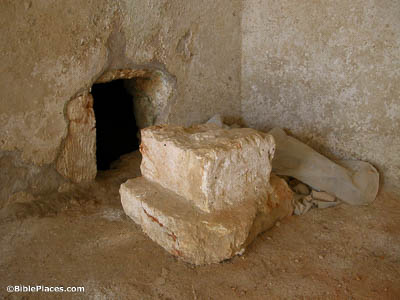 Christ: Near and Clear

This statement and that of the following verse (Rom 10:7) is something of a paraphrase of Deuteronomy 30:12-13. In that portion of Deuteronomy, Moses was making the point that the Law was not hard to find—it was already in their possession, so all they had to do was obey it. Paul’s point is nearly identical, although he substitutes Christ (i.e., the gospel) for the Law. His point is that there is no great difficulty involved for us in salvation, simply faith in the word that is near. The gospel message is plainly set before us and easily understood. This tomb is a typical rock-cut tomb in Jerusalem from the time of Paul. 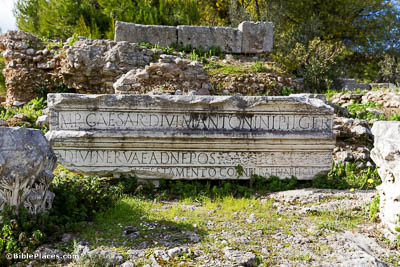 The confession that Jesus is Lord held particular significance for those living under Roman rule. The confession of Jesus as Lord was in direct opposition to the pronouncements that Caesar was the divine Lord. This inscribed frieze provides an example of the Roman emperor Nerva (AD 96–98) being called divine. It was photographed at Corinth, where Paul probably wrote the Epistle to the Romans. 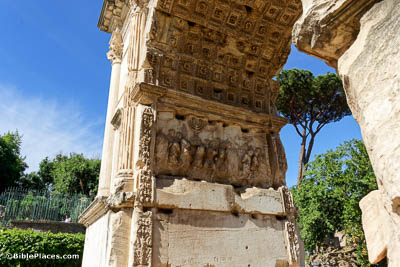 For the Scripture says, “Whoever believes in Him shall not be put to shame” (Romans 10:11).

One of the greatest disappointments of the Jewish people came shortly after the time that Paul wrote to the Romans, when Jerusalem was destroyed in AD 70. The temple in Jerusalem was demolished, putting an end to the priesthood and the sacrificial system. This scene on the Arch of Titus shows items from the temple being carried off, probably in a triumphal procession in Rome. For the Christian community, however, this was not an event that caused shame, because Christ had already made an end to sacrifice (Heb 10:10-14). 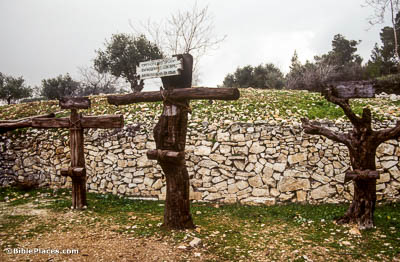 But they did not all heed the good news. For Isaiah says, “Lord, who has believed our report?” (Romans 10:16).

Paul’s quotation from Isaiah 53:1 comes from Isaiah’s description of the suffering Servant who took the place of God’s people in order to bring their sins upon himself (e.g., Isa 53:5-6) and to make them righteous (e.g., Isa 53:11). This was fulfilled in the suffering obedience of Christ, culminating in the cross. Incredibly, God used the very disbelief of those who rejected Christ to bring about salvation for those who did believe. These three crosses were photographed in a Scripture garden formerly located at Tantur, on the road between Bethlehem and Jerusalem.

Revelation to the Far Off

The carved relief shown here is from east pediment of the Siphnian Treasury at Delphi. In the very center (and now headless) stands Zeus, trying to separate Apollo (on the left) and Hercules (on the right). The two young gods are competing for the Delphic tripod and Zeus in the middle is trying to separate them. An outraged Hercules has already managed to seize the sacred tripod and Apollo is trying to pull it away from him. This scene of petty gods fighting over inconsequential issues illustrates how far removed the Greeks were from any knowledge of the true God. Yet, Paul argues, God revealed Himself and was found even by Greeks.