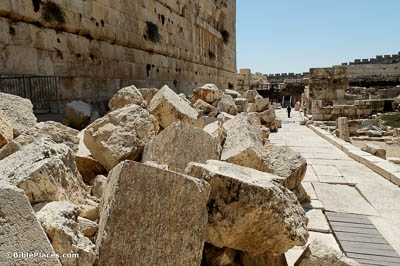 In chapter 2, Paul turns his attention away from pagan idolaters to self-righteous Jews, anticipating his conclusion in Romans 3:9-10 that both Jew and Gentile are sinners under God’s just judgment. This judgment was experienced historically by faithless Israel in the destruction of the First Temple by the Babylonians in 586 BC. It would happen again soon after Paul wrote this letter when the Romans destroyed the Herodian Temple in AD 70. Rubble from the Roman destruction of Jerusalem can still be seen at the southwestern corner of the Temple Mount, as seen in this photo. 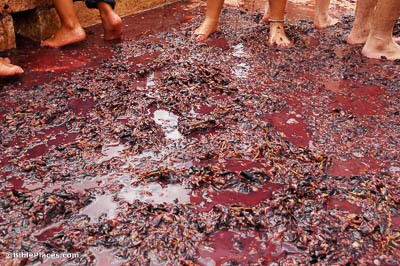 You store up for yourself wrath in the day of wrath and revelation of God’s righteous judgment (Romans 2:5).

This imagery of ”storing up” God’s wrath against sin may draw on the language of passages such as Joel 3:13, which compares it to loading up a winepress with grapes. After the winepress is full of grapes, it is trampled, releasing the flow of red liquid. This imagery symbolizes the righteous execution of God’s judgment. Similar imagery is also used in Revelation 14:17-20 to describe the eschatological judgment of God. 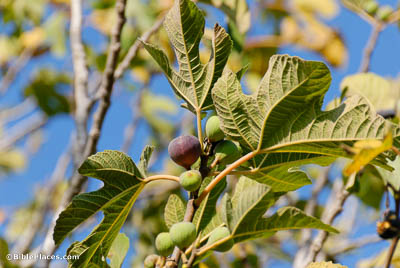 Glory and honor and peace to everyone who does good, to the Jew first, and also to the Greek (Romans 2:10).

The righteous one is described in Scripture as producing good fruits (Isa 3:10-11; 5:1-7; Jer 17:10; 32:19; Gal 6:7-8). Paul here sets up this standard in order to present this as the failed goal of fallen humanity, among whom there can be found not even one who does good (Rom 3:12). This paves the way for Paul’s proclamation of humanity’s one and only hope for salvation, the Second and Last Adam who alone has borne truly good fruit in full obedience to the law and in whom believers may be counted as righteous before God (Rom 5:18-19). 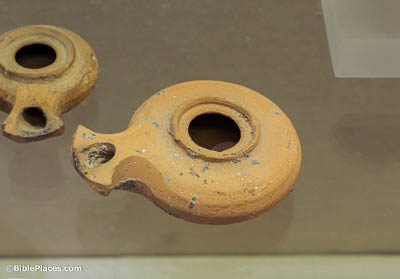 Confident that you yourself are a guide for the blind, a light for those in darkness . . . (Romans 2:19)

Artificial light in Paul’s day typically came from small clay lamps like those pictured here. These lamps with a flared spout and simple body were most popular in the area of Judea between the time of Herod the Great and the destruction of Jerusalem in AD 70. The round hole on the top was used to fill the lamp with oil; a wick placed in the spout would draw up oil and burn it, giving off light. 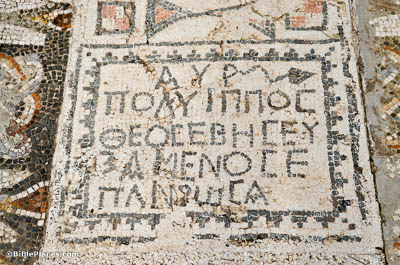 If the uncircumcised man keeps the requirements of the Law, will he not judge you . . . who are a transgressor of the Law? (Romans 2:26-27)

Paul may have had in mind some of the early Gentiles who were saved through the gospel. Cornelius was a Roman centurion at Caesarea who “feared God” (Acts 10:1). The phrase “one who feared God” is captured in a single word, “God-fearer” (theosebes) in inscriptions of the time, as seen in the third line of this inscription. It is not known how far Cornelius had gone in his conversion (he may have become circumcised already), but Paul clearly implies that some who were not circumcised outwardly did follow the spirit of the Law. 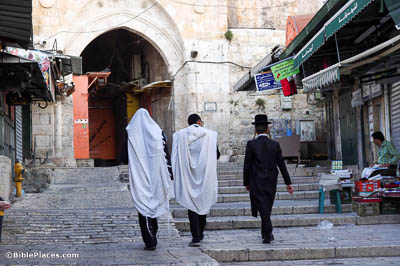 There have long been outward signs of religious practice within Judaism. The two Jewish men on the left are each wearing a kittel, a white, knee-length, cotton robe worn by Jewish prayer leaders and some Orthodox Jews on the High Holidays. The man on the right is wearing traditional Hasidic garb, including a long coat and a fedora. Paul’s argument is that such outward signs are not so significant as whether the person has submitted their heart in obedience to God.