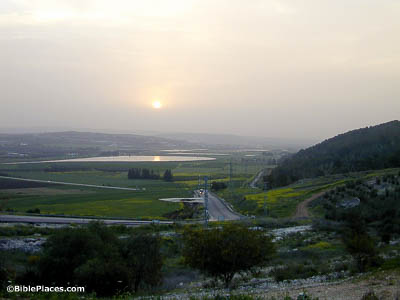 Sunrise at the Spring of Harod

Then Jerubbaal, that is Gideon, and all the people that were with him, rose early (Judges 7:1).

This photo of a sunrise was taken from the base of Mount Gilboa. Gideon’s men were encamped near the spring of Harod, which is located near the foot of Mount Gilboa on the right side of the image. The spring provided a well-known landmark as well as a good source of water, which would have been necessary for such a large group. 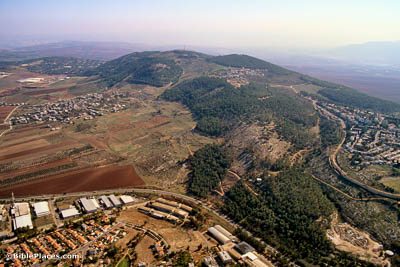 And the camp of Midian was on the north side of them, by the hill of Moreh, in the valley (Judges 7:1).

The hill of Moreh is mentioned in the Bible only in Judges 7:1. It is identified with the hill known today as Nebi Dahl. The text is not specific about the exact location of the Midianite camp. However, given that it is described as very large and spreading across the valley, it seems most likely that it was located on the north or northwest side of the hill of Moreh, between the hill and Mount Tabor. If so, the Midianites may have been camped somewhere off the left edge of this photo, while Gideon’s men would have been camped off the right edge. 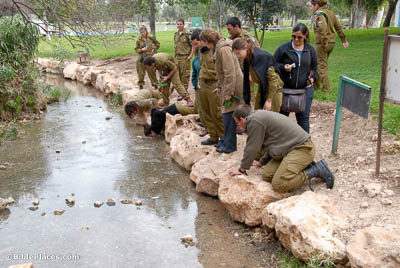 The people are still too many, bring them down to the water, and I will test them for you there (Judges 7:4).

Though the spring of Harod (Ein Harod) no longer looks the same as it likely did in Gideon’s day, there is still a flow of water, allowing modern visitors to drink in roughly the same place that Gideon’s force did. In a direct echo of the test that Yahweh performed here, some of these Israeli soldiers are kneeling to drink, while others are lapping. 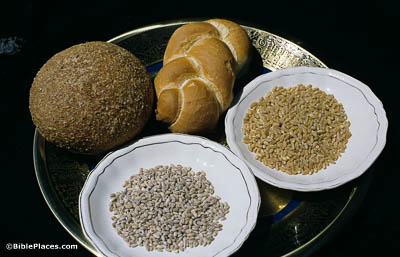 The barley loaf in this photo is the one on the left. Although this loaf is modern, it is fairly similar in shape to many of the leavened bread loaves recovered or represented from the centuries surrounding the time of Gideon. A barley loaf was a very inexpensive food item, and its use as a symbol for Gideon’s army suggests lowliness. That the tent of the Midianites collapsed reflects that Yahweh was fighting for this small army. 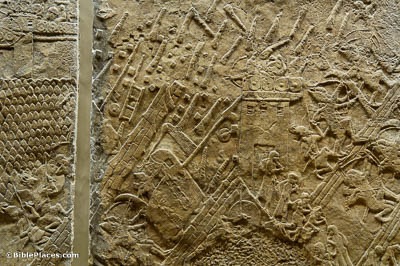 He put trumpets and empty jars into the hands of all of them, with torches inside the jars (Judges 7:16).

The “torches” used by Gideon’s men were not lamps, but bundles of flammable materials that could produce a larger fire. The same term is used in Judges 15:4 to describe the firebrands that Samson tied to the foxes’ tails in order to burn the grain fields of the Philistines. The relief shown on this slide includes torches from a somewhat later period. In this depiction of the Assyrian siege of Lachish, the defenders are showering the Assyrian siege engines with rocks and torches. This relief comes from the walls of Sennacherib’s palace at Nineveh. 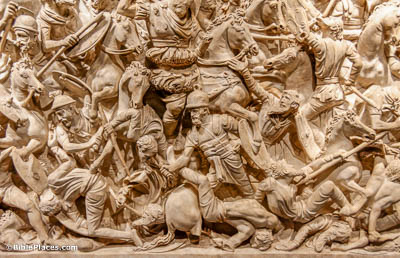 Chaos in the Midianite Camp

When they blew the three hundred trumpets, Yahweh set every man’s sword against his fellow (Judges 7:22).

The commotion that followed the appearance of Gideon’s men must have been crazy. The free-for-all shown here comes from a later time, but illustrates the wild ruckus that must have taken over the Midianite camp. It appears on a coffin known as the Portonaccio Sarcophagus, found near the Via Tiburtina in Rome.