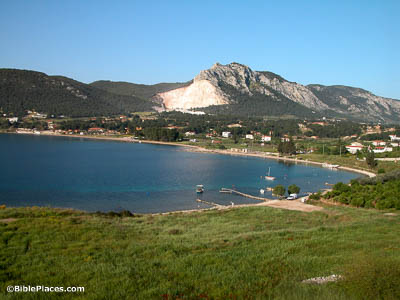 I commend to you Phoebe our sister, who is a servant of the church that is in Cenchrea (Romans 16:1).

Cenchrea (modern-day Keries) was located seven miles (11 km) east-southeast of Corinth and served as the city’s eastern port into the Aegean and Levant (Asia), while Corinth’s port into Italy and the west was Lechaion. Because of its relation to Corinth, Cenchrea’s prosperity followed Corinth’s, enjoying both greatness and poverty parallel to Corinth. It was located on the Saronic Gulf just south of Isthmia, and was named for Cenchreas, son of Poseidon and Peirene (according to Pausanias). Pausanias also observed that Cenchrea was home to several shrines. In addition to the shrine of Isis, which has been identified by the excavators, there were also sanctuaries of Asclepius and Aphrodite. 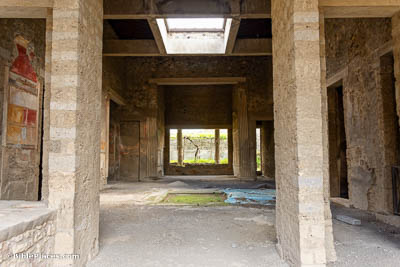 Greet the church that is in their house (Romans 16:5).

The earliest gatherings of Christians met in public places (Acts 2:46), synagogues (James 2:2), or in homes (Acts 20:8; Phlm 1:2). Purpose-built churches have not been found that pre-date the 3rd century AD. The earliest is the church at Dura-Europos, which was built around AD 230. Paul specifically mentions here the meeting of Christians in the house of Prisca and Aquila. Presumably theirs was a large home with some spacious area that would have been conducive to such a meeting. The atrium in this large house from Pompeii could have held such a gathering and may be similar to the house of Prisca and Aquila in Rome. 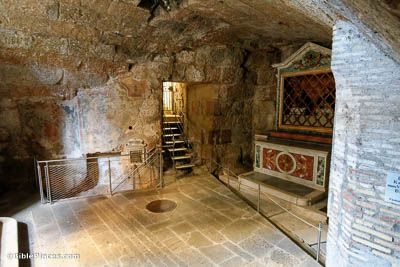 Greet Andronicus and Junia, my kinsmen and fellow prisoners (Romans 16:7).

An illustration of one of the prisons that was in use at this time in Rome is the Mamertine Prison. This is one of the most famous prisons associated with early Christianity, known in antiquity as the Tullianum. The state rarely incarcerated common criminals but kept the Mamertine Prison for political prisoners doomed for execution by being thrown off the Tarpeian Rock. Sallust, a Roman writer in 40 BC, described the Tullianum as “about twelve feet deep, closed all round by strong walls and a stone vault. Its aspect is repugnant and fearsome from its neglect, darkness, and stench.”

The God of peace will soon crush Satan under your feet (Romans 16:20).

The ancient Egyptians often portrayed bound enemies beneath the feet of a statue, symbolizing their complete conquest. In this case there are four enemies portrayed on the pedestal; all four have their arms bound at the elbows, either behind the back or in front. The fact that this scene is shown beneath the feet of the statue is not accidental. This statue was photographed at the Mortuary Temple of Ramses III at Medinet Habu. 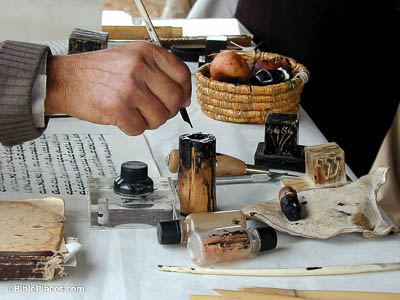 Tertius indicates that he has done the actual writing of the letter, as Paul dictated the contents. The use of a scribe, secretary, or amanuensis was a common practice in the 1st century since someone who was skilled at writing could produce a much more legible document. It is noteworthy that when Paul actually wrote a portion of a letter himself, he commented on it (Gal 6:11). The amanuensis could have varying degrees of input into the manuscript, ranging from merely copying by dictation to composition which would then be approved by the author. The use of different secretaries at different times may have influenced the stylistic variation in Paul’s letters. 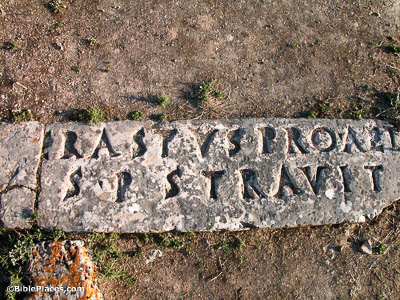 Near the Corinthian agora, a 1st-century inscription was discovered that mentions a man named Erastus. Many scholars consider it quite likely that the man named in this inscription is the same man to whom Paul refers in this verse. The Latin inscription reads, “Erastus, in return for his aedileship, laid (this pavement) at his own expense.” Aediles were elected officials who were primarily city business managers, responsible for city property such as streets, public buildings, and especially the marketplaces, as well as the public revenue from these things.