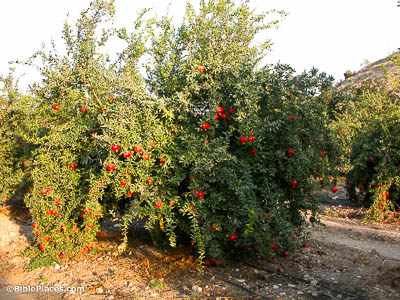 Saul was sitting under the pomegranate tree which is in Migron, on the outskirts of Gibeah (14:2).

The pomegranate tree near Gibeah was apparently known as a local landmark. Although pomegranate trees can reach 30 feet (9 m) in height, they more are more commonly between 12 and 16 feet tall (3.6–4.9 m). In the right conditions these trees can live over 200 years, although most fruit production takes place within the first 15 years. 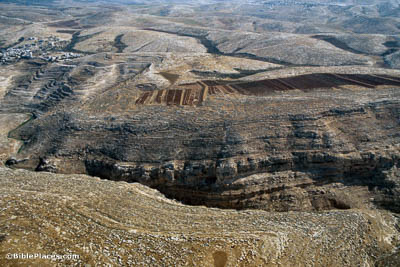 Jonathan decided not to take the expected route from Geba to Michmash, but to travel eastward and cross the Wadi Suwenit further along where the banks became much steeper. If the Philistine garrison mentioned in verses 1 and 4 was at Khirbet ed-Dawwara, then the crossing place of Jonathan could have been in the area visible in the center of this aerial photo. As is clear, this would have been an unexpected and difficult crossing place. 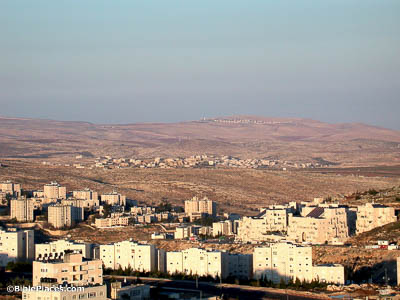 The View from Gibeah

And Saul’s watchmen in Gibeah of Benjamin looked, and, behold, the multitude melted away (14:16).

This photo illustrates that the area of Geba and Michmash is visible from Gibeah of Saul, where Saul was stationed. The distance from Gibeah of Saul to Michmash is about 4.3 miles (7 km), so it would have been nearly impossible to pick out individual people. However, movement of people, especially in groups, would have been easy to pick out, particularly if they were raising dust as they moved. It was easy enough to tell that there was no fixed battle line, but that something had caused the Philistines to flee. 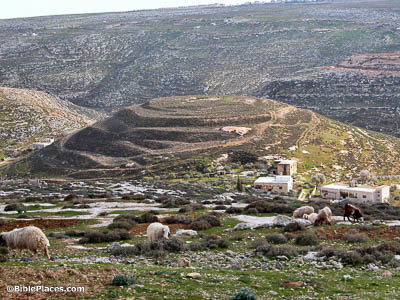 So Yahweh saved Israel that day, and the battle spread beyond Beth-aven (14:23).

The location of Beth-aven is debated. The three sites most commonly identified with Beth-aven are Khirbet Nisya, Tell Maryam (pictured here), and Beitin. 1 Samuel 14:31 will give notice that the Israelites eventually pursued the Philistines as far as Aijalon, which is well beyond any of these three locations, so all are within the expected area of battle. Also, the earlier notice that a Philistine contingent was sent to Ophrah seems to put even the northernmost location (Beitin) within the area where battle and pursuit would be expected. 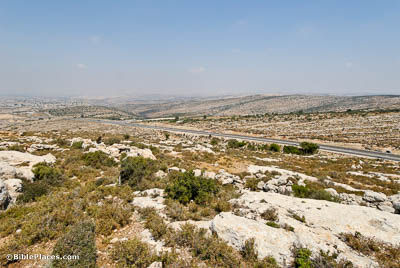 And they struck down the Philistines that day from Michmash to Aijalon (14:31).

Michmash was the easternmost outpost of the Philistines. The pursuing Israelites swept the Philistines off of the Central Benjamin Plateau and westward, presumably down the Beth-horon Ridge Route. The modern highway visible in this photo follows the Ridge Route’s ancient path. Here it can be seen descending westward toward Aijalon.