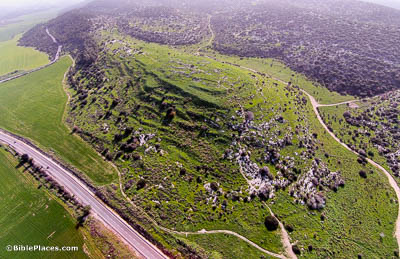 The Philistines . . . were gathered together at Socoh, which belongs to Judah (17:1).

Socoh of the Shephelah is identified with Khirbet Abbad near Khirbet Shuweikeh, which preserves the ancient toponym. Khirbet Abbad has remains from the Middle Bronze, Late Bronze, and Iron Age II (roughly 2200–1200 BC, 1000–586 BC). Socoh held a strategic position in guarding access to Judah’s hill country. If Israel lost Socoh to the Philistines, they would have trouble resisting their entrance up the routes to Bethlehem and Hebron. 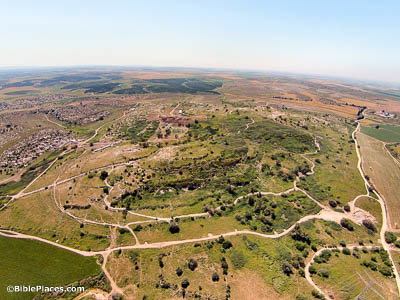 Then a champion came out from the Philistine army named Goliath, of Gath (17:4).

Gath is located approximately 5 miles (8 km) due west of Azekah. It is about the same distance south of another major Philistine city, Ekron. Three Philistine cities located on the coast have long been known because the sites were continually inhabited and the city names continued to be used (Gaza, Ashkelon, and Ashdod). The locations of the two inland cities, Gath and Ekron, have been disputed, but it is now widely agreed that Tell es-Safi is the site of ancient Gath. 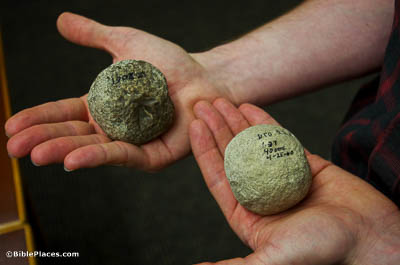 So he took his staff in his hand and he chose for himself five smooth stones from the brook (17:40).

Contrary to popular conception, sling stones were not small, but were about the size of a baseball or a fist. Hundreds or thousands of ancient sling stones have been discovered in Israel. These two sling stones were photographed at the Wheaton Archaeology Museum. 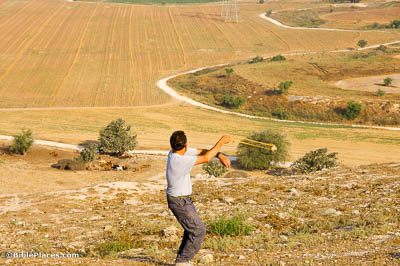 Using modern materials, slingers can sling stones well in excess of 1,000 feet (300 m). Ancient authors repeatedly stress the range advantage that the sling had over the bow and arrow. The ranges the sling could achieve with molded lead sling-bullets in Roman times was surpassed only by the composite bow. 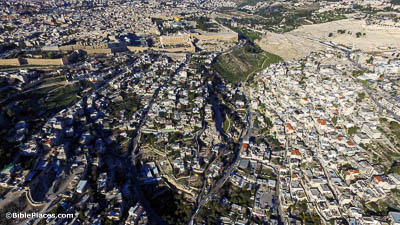 David took the head of the Philistine and brought it to Jerusalem, but he put his armor in his tent (17:54).

The mention of Jerusalem at this point in the narrative raises some questions, given that the city was not yet Israelite. One possible scenario is that David brought Goliath’s head to Jerusalem while it was under Jebusite control as a warning to them that they were no less secure defying the God of Israel. Indeed, once David was king of all Israel, his first recorded action was to conquer the Jebusite city and make Jerusalem his capital (2 Sam 5:6-10).