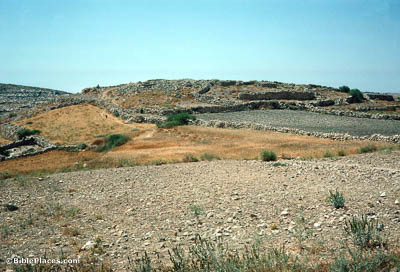 David and his men went to Keilah and fought with the Philistines (23:5).

Scholars identify the biblical site of Keilah with Khirbet Qila, located 2.8 miles (4.5 km) south of Adullam and 8 miles (13 km) northwest of Hebron. Keilah is situated next to the chalk trough, an important geographical feature that provided a convenient north-south route between the hill country and the Shephelah of Judah. 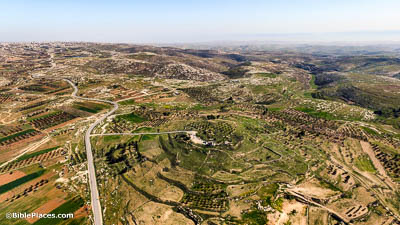 The biblical city of Ziph is usually identified as Tell Zif, located about five miles (8 km) south of Hebron. Tell Zif is the mound in the lower center of the photograph, topped with rows of trees. Tell Zif has not been carefully excavated, but a number of finds have been uncovered at the site, including a Jewish ossuary (from the New Testament period). Rehoboam, the grandson of David, fortified Ziph in the late 10th century BC (2 Chr 11:8). 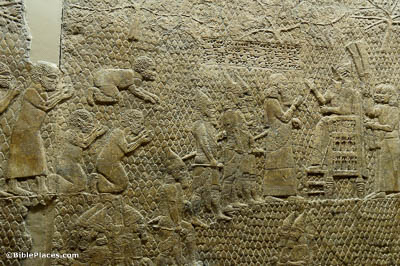 The inhabitants of Ziph clearly wished to ingratiate themselves with Saul, perhaps wishing to avoid conflict with him and choosing instead to betray David into his hands. A similar attitude is depicted with the Judean captives who are shown on this relief, bowing and scraping before the Assyrian king Sennacherib. The king is seated on his throne at the far right, and is surrounded by military officers and courtiers, a scene which may also reflect the general state in Saul’s quarters at Gibeah. This relief comes from the palace of Sennacherib at Nineveh.

The Wilderness of Maon

And they told David, and he went down to the rock and stayed in the wilderness of Maon (23:25).

The “wilderness” (Heb. midbar) of Maon would have been located to the east, in the rocky wastelands of the southern Judean wilderness. Nahal Mishmar, shown here, is about 12 miles (19 km) east of Maon. It illustrates the kind of wilderness typical of this region. 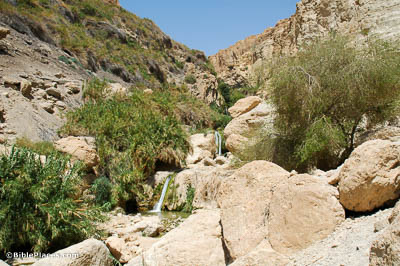 And David went up from there and stayed in the strongholds of En-gedi (23:29).

En-gedi is located on the western edge of the Dead Sea. It is an isolated area that owes its existence to a large spring near the cliff face. The name of En-gedi has been preserved until today by the Arabic name Ain Jidi. Tel Goren is the ancient site, but the city seems to have only been founded during the 7th century BC. On the other hand, remains from throughout the Iron Age (circa 1200–586 BC) were found all around the vicinity of the oases.