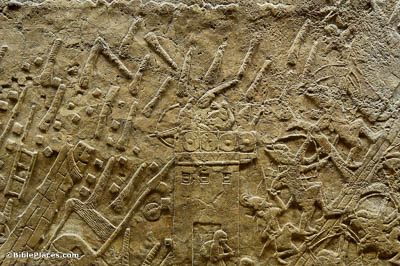 What if some were faithless? Their faithlessness will not nullify the faithfulness of God, will it? (Romans 3:3).

Paul anticipates here an important potential challenge to God’s faithfulness which he will address more fully in chapters 9–11. Namely, is God’s faithfulness invalidated by His past judgment on Israel? At this point in Paul’s argument, his answer to this question of God’s faithfulness focuses on the consistent justice of God’s judgments. After all, the oracles of God with which Israel was entrusted warned of the very judgments they would receive for covenant breaking (e.g., Deut 28:15-68). A striking example of this is the military campaign of the Assyrian king Sennacherib against the Northern and Southern Kingdoms at the end of the 8th century BC. The relief shown on this slide depicts Sennacherib’s siege of Lachish, the second largest city of Judah at the time. 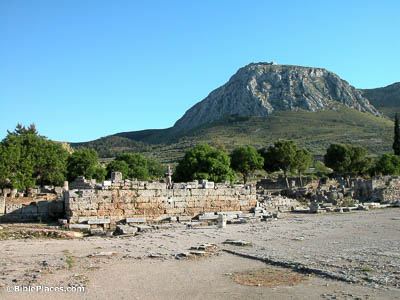 Paul’s religious opponents caricatured the gospel which Paul preached as saying that Christians could sin with impunity. Such charges must have been heard by Paul during his customary visits to the synagogue (Acts 18:4). Based on a comparison with the narrative given in Acts as well as several pieces of evidence within the Book of Romans itself, we can be fairly confident that Paul wrote Romans during a stay in Corinth (Acts 20:2-3). Thus, Paul may even have had this charge against his message fresh in his mind from the very disputes with some of the Jewish opposition there which eventually forced him to flee the city. 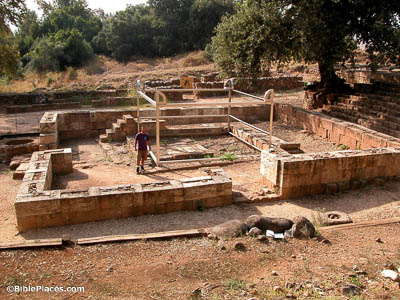 Now we know that whatever the Law says, it speaks to those who are under the Law (Romans 3:19).

Being under the law does not exempt anyone from the charge of lawlessness in these verses; rather, these verses are intended to include those under the law. Therefore, Paul suggested that those who were under the Law (Jews) were just as guilty of breaking the Law as those who were outside. The high place built at Dan by Jeroboam the son of Nebat, pictured in this photo, is an example. Jeroboam built this altar and another at Bethel to prevent the Israelites from worshipping the true God in Jerusalem (1 Kgs 12:26-30). Later writers referred back to this sin repeatedly as an example of law-breaking by Israelite leaders (e.g., 1 Kgs 16:26, 21:22, 22:52, 2 Kgs 15:9). 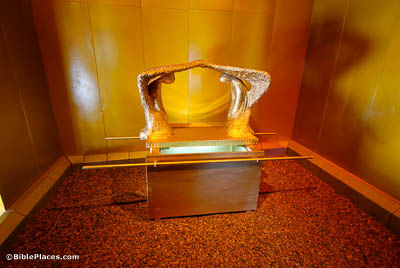 Whom God displayed publicly as a propitiation, through faith in His blood (Romans 3:25).

The word translated here as “propitiation” is the Greek word hilasterion. The Septuagint uses this word to refer to the lid on the ark of the covenant, where blood from a sin offering would be sprinkled by the high priest on the Day of Atonement. This is also referred to as the mercy seat. Christ is the fulfillment of the Mosaic Covenant, being both high priest and sacrifice. In addition, like the mercy seat in the temple, Jesus is the place of atonement designated by God as the only place where sinners can find full redemption. This ark was photographed in the reconstruction of the tabernacle at Timna Park in southern Israel. 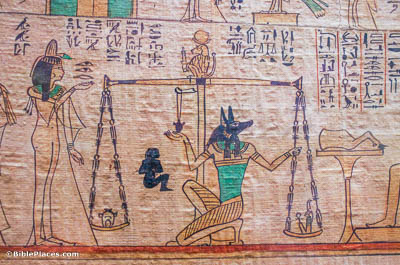 Since God is one, He shall justify the circumcised by faith, and the uncircumcised through faith (Romans 3:30).

The ancient Egyptians believed that salvation was based on works. In the afterlife, the heart of the deceased would be weighed on a scale against a feather; on this scene the Egyptian god Anubis crouches beneath the scale to evaluate the heart. This is in stark contrast to what is taught by Paul, that justification comes not by works but only through faith, regardless of whether a person be a Jew or a Gentile. This papyrus roll was discovered in the tomb of a woman called Nany. In her seventies when she died, she was a singer of the god Amun-Re.

Anticipating that someone might conclude that the Law has no function if God justifies people through faith, Paul confirms that the Law is not nullified. Rather, it is “established,” or confirmed. Paul valued the Law, in part because it points to the Messiah (Gal 3:24). In fact, his reliance on the text of the Old Testament to establish much of what he says in the Book of Romans is noteworthy. He surely considered it worth studying, as the Jewish rabbi shown in this photo does. This American Colony photo was taken between 1934 and 1939.