The Gospel to the Jews and Gentiles 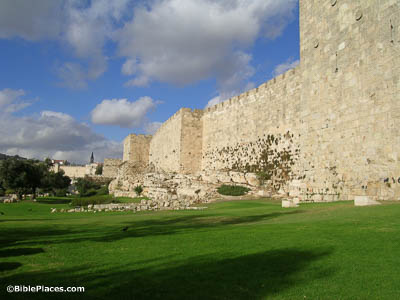 Then after fourteen years I went up again to Jerusalem with Barnabas (Galatians 2:1).

This green space by the wall of the Old City, without modern buildings, gives a sense of how the city of Jerusalem might have appeared when Paul and Barnabas visited it. In fact, some portions of the lower part of the wall pictured here are from the first-century wall, along with the remains of a staircase seen protruding into the grassy area near the middle of the photo. 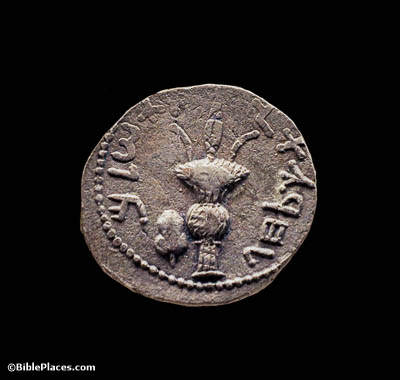 Because of the false brethren who were secretly brought in to spy out our liberty which we have in Christ Jesus (Galatians 2:4).

This coin from the Bar Kokhba Revolt (AD 132–135) has a Hebrew inscription (imitating a paleo script) that reads “for the freedom of Jerusalem.” This illustrates the political freedom that many in Paul’s day expected from the Messiah. Later, many Jews hoped figures like Bar Kokhba would bring such freedom. Paul argues that true freedom, from death and sin as well as from the constraints of the Mosaic Law, has been brought about in Christ Jesus. 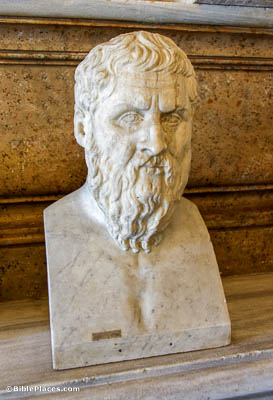 When they saw that I had been entrusted with the gospel to the uncircumcision . . . (Galatians 2:7)

In this context, Paul uses the term “the uncircumcision” in juxtaposition to “circumcision,” thus using it as a blanket term for any Gentile (Gal 2:9). This would have included nearly the entire Greco-Roman world, represented here by the Greek philosopher Plato. This bust is thought to be a Roman copy of a late 4th century BC Greek original. 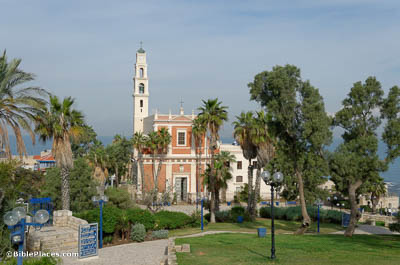 He who worked through Peter for the apostleship to the circumcision, worked for me also to the Gentiles (Galatians 2:8).

Peter had to this point in his life never spent significant time outside of the Jewish regions of Galilee and Judea. This was, therefore, the area where he was most naturally suited to minister. The church in this photo was built to commemorate Peter’s visit to Joppa, in which he had a vision from God that confirmed the call to the Gentiles (Acts 10; cf. Acts 11:18).

Before certain people came from James, he was eating with the Gentiles. But when they came, he withdrew and separated himself, fearing the party of the circumcision (Galatians 2:12).

A warning inscription addressed to Gentiles was posted next to each opening on the low balustrade shown above, which separated the Court of the Gentiles from area restricted to Jews. Gentiles were not allowed to approach the temple for fear of defiling it, according to the law. This may have been what Paul had in mind when he said that Christ has broken down the “dividing wall” (Eph 2:14). Here, Paul is saying that the actions of Peter and those following his lead were inconsistent with Gentile inclusion in Christ. This model was photographed at the Israel Museum. 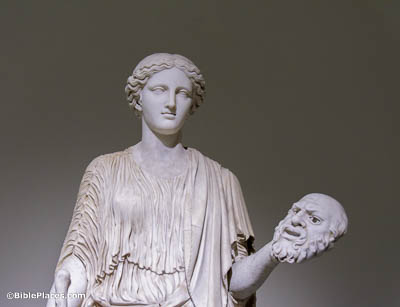 And the rest of the Jews acted hypocritically with him (Galatians 2:13).

The word translated “act hypocritically with” is derived from the world of Greek theater. The Greek word for actor is hupocritēs, the source of the English “hypocrite.” The use of masks allowed a theatrical actor to portray someone whom they were not, as with this female holding the mask of a bearded male. Paul considered Peter’s actions to be hypocritical because he put on one face with the Gentiles when James was not there, but a different face when James was present. It is thought that this 2nd century AD statue is a copy of a 5th century BC original. 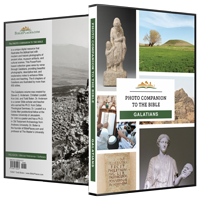