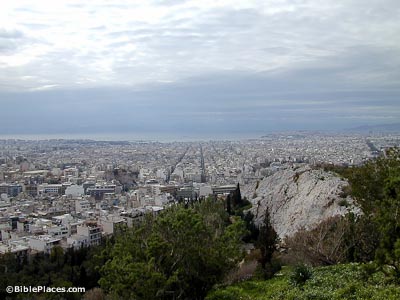 Most scholars believe that Paul traveled to Athens by boat from Berea and thus it is likely that he entered the city through its large port of Piraeus.

The port was originally built in the 5th century BC and still thrives today. In ancient times Piraeus was connected to Athens (6 miles distant) by the Long Walls, two parallel walls 600 feet apart. 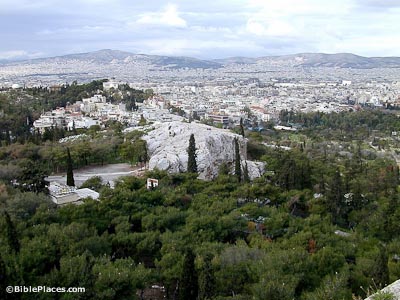 On his visit to Athens, Paul gave a speech to the learned men of the city at the Areopagus (Mars’ Hill).

Mars’ Hill is a prominent site located 140 feet below the Acropolis, and in Paul’s day it was the meeting place of the main governing body of the city. While some think that Paul’s appearance here indicates some sort of judicial proceeding, most see the reference as only the location of his preaching (Acts 17). 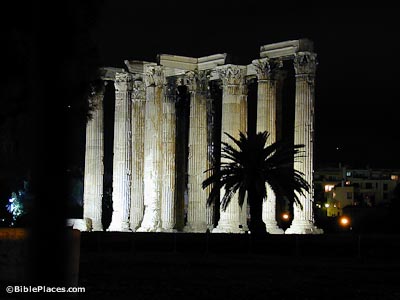 Begun in the 6th century BC, this temple was finally completed during Hadrian’s reign in the 2nd century AD. Antiochus Epiphanes of Seleucid rule did much construction on the site between 174-165 BC. Today 15 of the original columns are still standing. 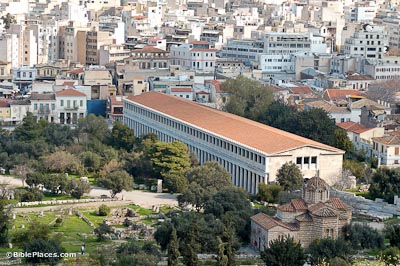 This two-tiered covered colonnade was a gift to the city by the king of Pergamum, Attalus II (159-138 BC). The stoa was restored in 1953-56 so that it might house the artifacts from the Athens’ excavations being carried out by the American School of Classical Studies. It served as an example for the model of the Royal Stoa in Jerusalem (now on display at the Israel Museum). 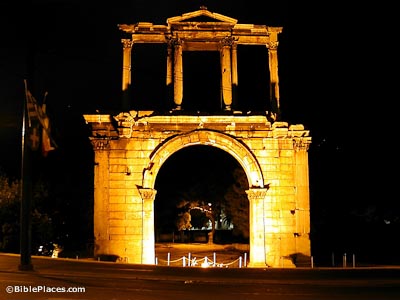 Athens (Encyclopaedia Britannica). This long and informative article is helpfully broken down by subheading in the sidebar.

The Ancient City of Athens (The Stoa Consortium). Comprehensive resource designed as an aid to teachers and students of ancient Athens. Includes site descriptions, essays, pictures, bibliographies, and links to related sites.

Athenian Agora Excavations (American School of Classical Studies). Official website of the Agora excavations with an amazing amount of resources, including: an introduction to the excavations, excerpts from excavation reports, and numerous photos of structures and artifacts found there. Especially noteworthy is the Site Tour which contains almost sixty 360 degree images located here.

Ancient Athens 3D. This passion project is well worth looking at. The site features 3D reconstructions of Athens across various historical periods, and the articles have a wealth of information.

A day in the life of an ancient Athenian (YouTube). A short and well-animated video.

The 10 best museums in Athens (Lonely Planet). May be helpful for those planning a trip to Athens.