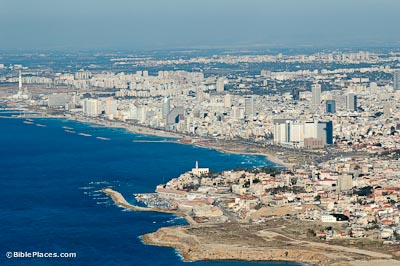 The biblical town of Joppa is today known as Jaffa. This was the main port of the coast before the Israelis constructed the ports of Haifa and Ashdod. The modern city of Tel Aviv was founded on the outskirts of Jaffa in 1909 and today, it encompasses the ancient city. Tel Aviv means “the Hill of Spring” and it is the same name as the city of a settlement in Babylon during the Exile (Ezek 3:15). The Tel Aviv area is the largest metropolitan area in Israel in the modern day. 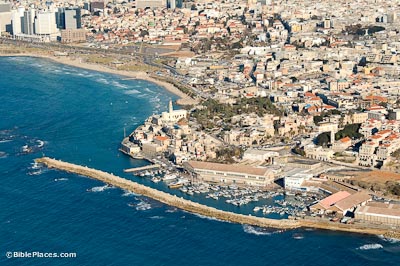 Jaffa is located about 30 miles (48 km) south of Caesarea. The modern population of Jaffa is about 60,000. Jaffa has a Jewish majority (mostly from other Mid-Eastern and North African countries) with a sizeable Arab Christian and Muslim population. The name Joppa appears for the first time in the list of cities that Thutmose III captured (15th century BC). The legend of Andromeda being bound to the rock was first associated with Joppa by Strabo (1st century AD). 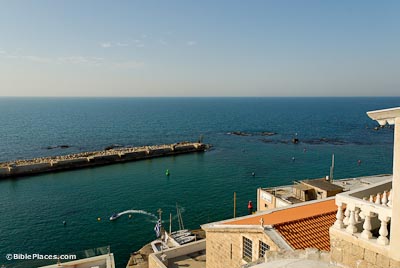 Jaffa is one of the oldest functioning harbors in the world. Today, it harbors only small fishing boats. This was the port to which Jonah came when fleeing from the Lord to Tarshish (Jonah 1:3). For the construction of Solomon’s Temple, cedars were floated from Phoenicia to Joppa and then transported to Jerusalem (2 Chr 2:16). Jaffa was the main port of entry during the Turkish period and pilgrims and visitors would enter the Holy Land here. 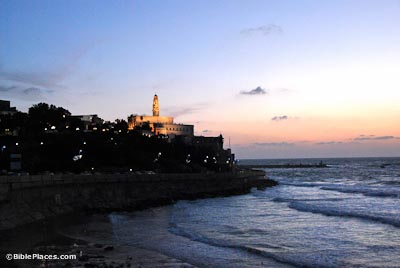 Peter came to Joppa from Lydda to raise Tabitha (Dorcas) from the dead (Acts 9:36-42). While in Joppa, the apostle stayed at the house of Simon the Tanner. When Peter was praying on the roof, he had a vision of a large sheet filled with animals being lowered from heaven (Acts 9:43–10:23), signaling to him to go with the messengers from Cornelius. The Church of St. Peter marks the traditional site of Peter’s vision of the great sheet.

For related sites, see Sidon and Tyre. For historical images, see the Jaffa and Travel by Sea pages at Life in the Holy Land.

Jaffa (Jewish Virtual Library) This article gives quite a complete history of the Jaffa, from the time of Noah to modern-day.

Jaffa (The Jewish Magazine) Informative discussion about the history and archaeology of the site as well as some of the legends about it.

Jaffa (Catholic Encyclopedia) Recounts the history of the city from the time of the Israelite conquest until the modern era.

Joppa (All About Archaeology) Gives a brief look at the site, and includes the text of Jonah 1:3 and Acts 9:36-43.

The Conquest of Jaffa (The Irgun Site) Describes the Jewish attack on Jaffa in 1948 and the reasons for it.

Jaffa / Yafo (Tourist Israel) The tourist’s guide to the city.

Jaffa (PalestineRemembered.com) A Palestinian website that provides information about the city and its history. Contains a large number of pictures from throughout the 20th century.