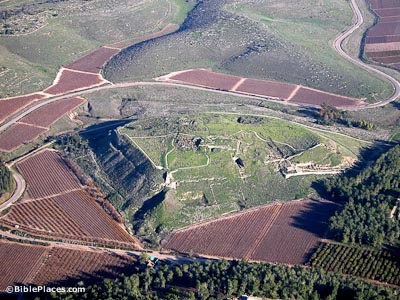 Identified first as Lachish by Albright in 1929, the tell was excavated by James Leslie Starkey from 1932–38 and by Tel Aviv University from 1973–87.

Lachish is generally regarded as the second most important city in the southern kingdom of Judah. It enters the biblical narrative in the battle accounts of Joshua, Sennacherib and Nebuchadnezzar. 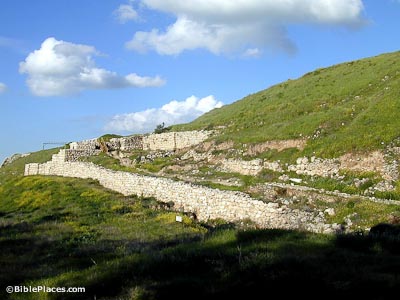 The city was surrounded by two walls including a lower retaining wall. The approach ramp led to the outer gatehouse which in turn led to the inner triple-chambered gatehouse.

Lachish is the only tell in the country that is owned by the Israel Antiquities Authority. They inherited it from the British who purchased the site for excavation. 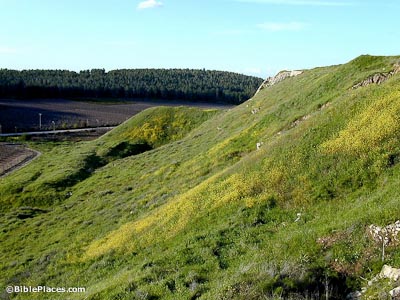 Starkey’s excavations of the moat on the west side of the tell revealed a rich collection of finds in the Late Bronze Age Fosse Temples. Three successive temples built here by the Canaanite inhabitants were finally destroyed about 1200 BC.

After Starkey was murdered in 1938, local Arabs looted all that was left of this temple, especially the remains of the lowest level. 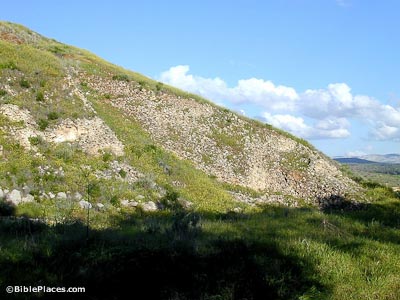 The only siege ramp excavated in the ancient Near East is this one constructed by the forces of Sennacherib in his 701 BC invasion of Judah. More than 1000 iron arrowheads were found in the ramp as well as a chain for catching the battering rams.

This ramp is depicted in Sennacherib’s siege reliefs with five battering rams ascending it. 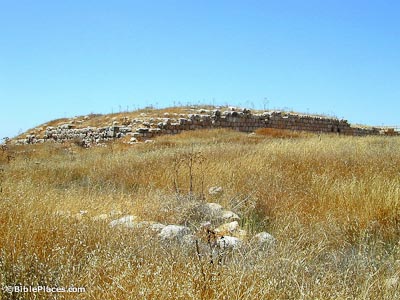 At the end of the Judean monarchy, this governor’s residence was half an acre (0.2 ha) in size. It is the largest Iron Age structure known in Israel. Built on the summit of the tell, this palace was constructed in three discernible phases which help archaeologists to understand the length of the cubit in the earlier and later periods. Evidence for the stabling of horses in the courtyard has been found. 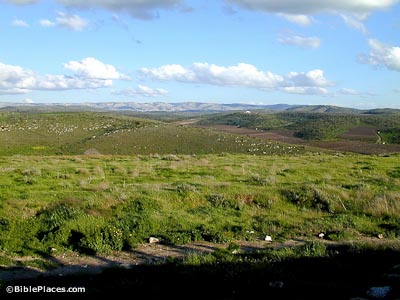 The famous Lachish Letter #4 describes how the writer was looking for the signal-fires of Lachish for the signal-fires of Azekah could no longer be seen. Possibly the writer of this ostracon was viewing the destruction of the cities of the Shephelah from the nearby hill country to the west. Jeremiah 34:7 corroborates the fact that the last two cities remaining were Azekah and Lachish.

For a Bible chapter related to Lachish, see Joshua 15.

Why Lachish Matters (Biblical Archaeology Review) This 2005 article by Philip J King was originally published in BAR, and gives some great background on Lachish, accompanied by photos. Several older articles from BAR are also available for public access here.

Lachish: Royal City of the Kingdom of Judah (Israel MFA) Highlights the history of both the Canaanite and Israelite cities.

The Ghosts of Tel Lachish (Jerusalem Post) Written by licensed tour guide Allan Rabinowitz, this 1999 description of the tel is both vibrant and accurate. Focuses on a vivid description of the Assyrian siege, including a description of Sennacherib’s relief. Although the website is dated, the information remains relevant.

Desecrated Shrine Discovered in Lachish Gatehouse (BiblePlaces.com) This article gives links to several other stories, and discusses the 2016 discovery of a toilet in the Lachish gate chamber. Includes several photos.

80-Foot Gate and Shrine Excavated in Ancient City of Tel Lachish (History) This article discusses some of the 2016 excavation finds from the site, including the presence of an ancient toilet in the gate chamber.

Gate Shrine from First Temple Period Unearthed at Tel Lachish National Park (Jerusalem Post) Although the ads are annoying, the information is interesting as it announces the gate chamber discovery at Tel Lachish. Includes an interview with the dig director, Ganor, and his take on possible connections with biblical King Hezekiah.

Canaanite Temple Discovered at Tel Lachish (BiblePlaces.com) This 2020 article discusses the recent discovery of a Canaanite temple at the site and includes several relevant images.

Lachish—Blending the Bible, History, & Archaeology (Wayne Stiles) An excellent and well-illustrated article that we highly recommend.

Lachish (BibArch) Features informative links within the text to resources including Scripture references and relevant articles on archaeological terms and periods.

Lachish (The Jewish Magazine) A comprehensive look at the history of Lachish, from the time of Joshua to the Hellenistic period. Includes a lengthy section on visiting Lachish with descriptions of the remains.

Lachish Battle Reliefs (Lachish.org) This website shows several of the reliefs, along with captions. They come from Sennacherib’s palace, where they were in the place of honor to commemorate his victory.

Lachish Ostracon #3 (personal page, K.C. Hanson) Gives a technical description of this ancient document and a translation of its text.