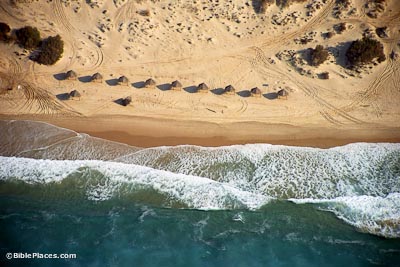 The Philistines who migrated to the coastal plain of Israel around 1200 BC settled in five major cities. Three of these were along the coastal branch of the International Highway leading from Egypt, but because of the presence of sand dunes, only Ashkelon was built on the shore. At 150 acres (60 ha), the tell of Ashkelon is the largest Philistine city, and one of the largest tells in all of ancient Israel. 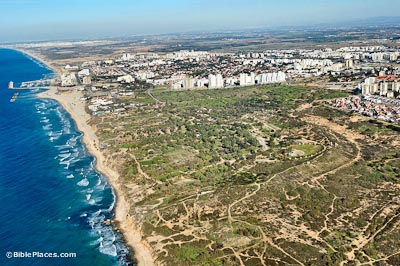 Since 1985, Harvard University has been excavating Ashkelon under the director Lawrence Stager. More than a century earlier, Ashkelon was the site of the first “archaeological excavation” in the Holy Land when Lady Hester Stanhope conducted a small dig. Excavations have uncovered remains from nearly every period from the Neolithic Age until the 13th century AD. 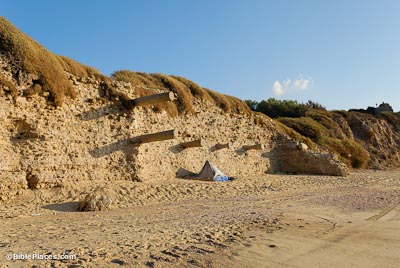 During the Middle Ages, the Muslim rulers of Ashkelon re-used Roman granite columns to strengthen the construction. These columns now protrude from the eroded tell as waves have gradually washed away ruins on the shoreline. The Canaanite city was surrounded by a massive rampart on three sides of the city, and the fourth side was protected by the sea. Later fortifications took advantage of the rampart, and walls were constructed on top of it. The city had no springs but several good wells and fertile soil.

One of the earliest intact gates in Israel was excavated at Ashkelon in the 1990s. The Middle Bronze mudbrick structure is contemporary with the well-known one at Dan. This photograph shows the area after it was reconstructed and opened to visitors. Outside the gate, a bronze calf was discovered, apparently once worshipped at the city entrance.

Ashkelon was an important city after the Babylonians destroyed the city and wiped out the Philistines. A key seaport in the Hellenistic period, Ashkelon became a free city in 104 BC and the birthplace of Herod the Great shortly after. Herod rebuilt the city and it flourished in the Roman and Byzantine periods. The Crusaders later re-fortified the city but Saladin captured it and destroyed it upon the approach of Richard the Lion-hearted.

For a related site, see Gath.

The Leon Levy Expedition to Ashkelon (official site) This site, illustrated with many photos, enlightens the reader about the years of excavation at Ashkelon.

Ashkelon (Jewish Virtual Library) Gives the biblical history, including references, and then some modern history too. Merges into a further discussion of interesting sites in the area, including Ashdod, Ekron, and more.

Ashkelon (The City of Ashkelon) The municipal site; this link features a brief history of Ashkelon, along with some interesting modern information.

Ashkelon (Ashkelon123) This website is another great source for information about the modern city, and it also has a well-illustrated history page.

Ashkelon (WebBible Encyclopedia, ChristianAnswers.net) Interests the reader with biblically and other historically descriptive facts, including internal links to related topics.

Ashkelon (The Jewish Magazine) A review of the history of the site with colorful personal insights that lend a real-life flavor to the experience.

Ashkelon’s Dead Babies (Archaeology Magazine) A fascinating article from 1997, reporting on the startling find of nearly 100 infant skeletons in the sewer beneath a Roman/Byzantine bathhouse and considering the possible explanations.

Story of Philistines Could Be Reshaped by Ancient Cemetery (NY Times) A 2016 press release about this excavation.

Philistine Cemetery Unearthed at Ashkelon (Bible History Daily) A 2018 article about the 2016 discovery of a very interesting cemetery. Read more on the New York Times article.

Ancient DNA Sheds New Light on the Biblical Philistines (Smithsonian) This discussion of the DNA evidence surrounding the Philistines gives a further perspective on the implications of the cemetery excavation.