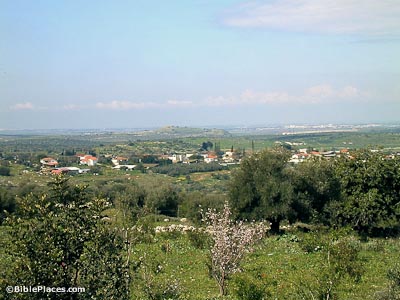 The name of the city in Hebrew is “gat,” which means “winepress.” This picture has an ancient winepress in the foreground, with the city behind. The area around Gath was very fertile and it’s likely that the city had a number of winepresses. Archaeological excavations at Gath’s neighbor, Ekron, found an abundance of oil presses on the site. 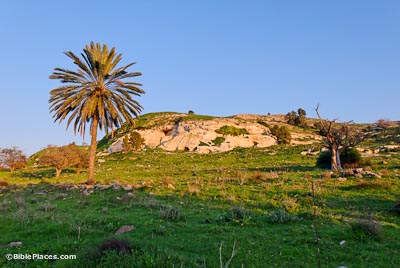 Most scholars agree today that Gath is to be identified with Tell es-Safi. This Arabic name for the site means “the white mound” and is appropriate because of the white chalky cliffs visible on the sides of the tell. The biblical site of Libnah (which means “white”) is probably not to be identified with Tell es-Safi in spite of the meaning of the names. 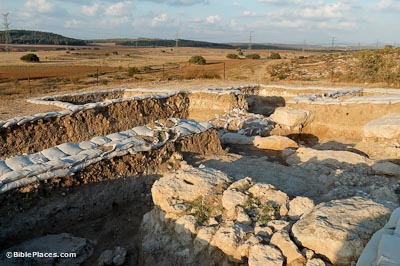 The site was identified as Gath in 1887 and excavated by Bliss and Macalister in 1899. At the time, the site was occupied by an Arab village, which was later abandoned in 1948. Bar Ilan University is now excavating the site under the supervision of Aren Maeir. 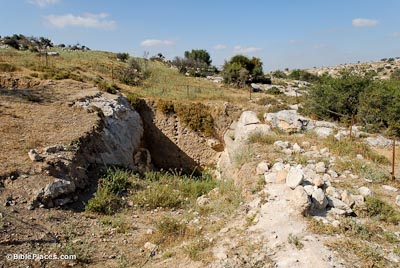 Recent excavations uncovered a 1.5-mile-long (2.4-km-long) moat that surrounded the city on three sides. This moat dates to the 9th century BC, and was apparently built by Hazael and his Aramean army when they were besieging the city in 811 BC. A brief notice of this battle is given in 2 Kings 12:17.

See the related site of Ashkelon. For historical images illustrating David’s confrontation with Goliath, see Life in the Holy Land.

Tell It In Gath (Jerusalem Post) This 2001 article discusses the most recent discoveries at that point.

Ancient Gath (History of ANE Compendium) Brief description of the site with photos and links.

Goliath’s Birthplace More Giant Than Believed, New Excavations Show (Jerusalem Post) This 2019 article discusses some of the recent excavations at Gath. Read more from this article on HaAretz.

Colossal Ancient Structures Found at Gath May Explain Origin of Story of Goliath (Times of Israel) While the excavator and article author do not believe Goliath was a historical figure (as is clear from the article title), this 2019 article has some interesting information about excavations of major fortifications at the site.

Tell es-Safi/Gath Excavations (National Geographic) Ten photos with descriptors detail the methods being used in 2013 at the site.