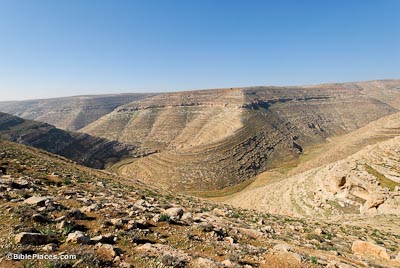 Because of its lack of water and good routes, the Judean wilderness has been (mostly) uninhabited throughout history. Consequently it was an ideal place for those seeking refuge from enemies or retreat from the world. When on the run from King Saul, David hid in various places in the Judean wilderness (the Wilderness[es] of Ziph, Maon, and En Gedi are part of the Judean Wilderness). John the Baptist preached here, and it seems likely that this was the wilderness where Jesus was tempted. Herod the Great built two fortresses (Herodium and Masada) in this area for protection should his people ever revolt against him. 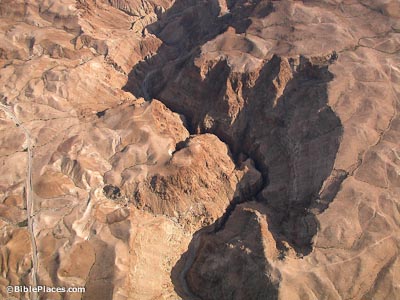 The Nahal Darga is the largest wadi in the northern Judean desert, and it is one of the five largest in the entire Judean desert. It is 27 miles (44 km) long and drains about 89 square miles (230 sq. km). The Nahal Darga is up to 650 feet (200 m) deep. Most wadis begin with an abrupt drop of about 330 feet (100 m), but this one drops in a series of short falls, each less than 33 feet (10 m). The water stays in small pools at the bottom of each fall because the narrow shape of the canyon keeps sunlight from reaching it. These pools are the most reliable source of water north of En Gedi. 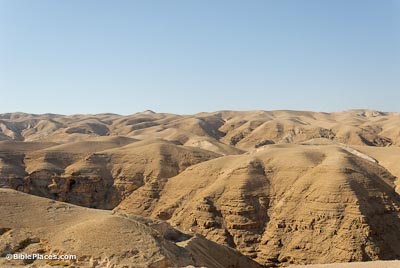 In the Byzantine period, the Judean wilderness was flooded with monks seeking seclusion. One book about this phenomenon is entitled The Desert a City (by Derwas Chitty), which appropriately captures the situation. At the height of the Byzantine period (the 6th century AD), there were approximately 65 monasteries in the Judean desert. The average distance between those on the wilderness plateau was 2–3 miles (3–5 km), and they were linked by a network of trails. 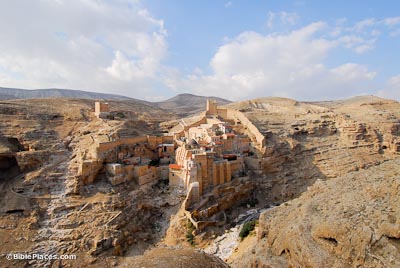 Mar Saba was founded by Sabas in the year 483 and became the largest monastery in the Judean wilderness. Sabas started or participated in the construction of ten monasteries, eight of them in the Judean desert. Mar Saba was a laura-type monastery, which served as the center for monks who lived separately throughout the week but gathered together on weekends for communal prayer and mass. Most monasteries were abandoned following the Muslim conquest, but Mar Saba was one of the few monasteries that continued to survive. An earthquake destroyed much of the monastery in 1834; a great deal of it had to be reconstructed. 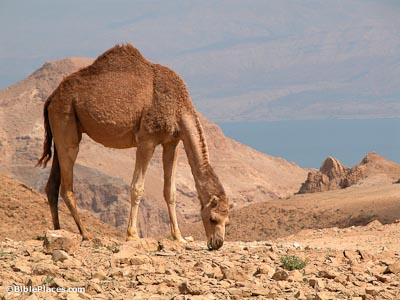 The Bible describes the ancient use of the camel mainly as a beast of burden for desert nomads. Although there is some controversy as to when they came into use, they were known to have been used in Oman in 2500 BC. They were also a good source of milk, but could not be eaten. Camels can lose up to one-third of their body weight in water and then replenish that loss within ten minutes. Their humps (dromedaries/Arabian have only one), fibrous masses of tissue and fat, serve as energy reserves used on long journeys across the desert. 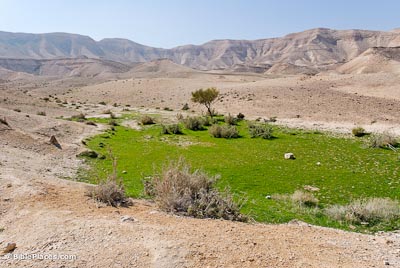 Every spring, the wilderness blossoms—for a short time. Then the sun comes out and everything dries up. Isaiah 40:6-8 (NIV): “The voice said, ‘Cry out!’ And he said, ‘What shall I cry?’ ‘All flesh is grass, and all its loveliness is like the flower of the field. The grass withers, the flower fades, because the breath of the Lord blows upon it; surely the people are grass. The grass withers, the flower fades, but the word of our God stands forever.’”

The Road to Jericho (Bible Odyssey) Gives helpful history and information about the road between Jerusalem and Jericho.

From Jerusalem to Jericho (American Bible Society) This article includes quite a complete walking narrative of the road in the time of Jesus, along with some interesting facts about ancient road construction.

Off the Beaten Track in the Judean Desert (Times of Israel) Included here for its highlights of the St. George and Mar Saba Monasteries.

Judean Desert (Tourist Israel) Illustrated with a few nice photos, this article highlights some of the sites with the Judean desert (even as far south as Masada). (If you want a unique tour, they recommend the Judean Desert Jeep Tour, which looks like a good time!)

Mar Saba (See the Holy Land) Includes a brief history and some photos of this incredible monastery.

Aerial View of Mar Saba Monastery in the Judean Desert (YouTube video) This amazing aerial video gives some great perspective for the size of the monastery and the harsh terrain in which it rests.