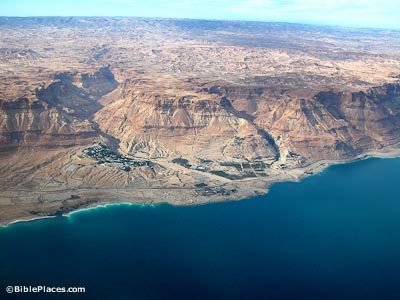 En Gedi is the largest oasis along the western shore of the Dead Sea. The springs here have allowed nearly continuous inhabitation of the site since the Chalcolithic period (ca. 3500 BC). The area was allotted to the tribe of Judah, and was famous in the time of Solomon (Josh 15:62). Today, the Israeli kibbutz of En Gedi sits along the southern bank of the Nahal Arugot. 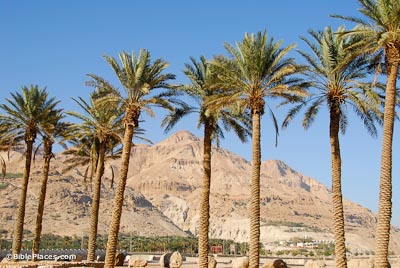 The abundant springs and year-round temperate climate provided the perfect conditions for agriculture in ancient times. Solomon compared his lover to “a cluster of henna blossoms from the vineyards of En Gedi,” an indication of the beauty and fertility of the site (Song 1:14). Evidence has been found of workshops used in the perfume industry to distill products made from balsam. It has even been suggested that the perfume production at En Gedi was part of a royal estate. 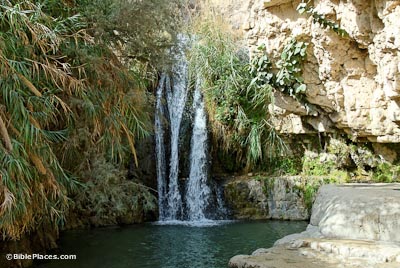 Even though there are many springs around the Dead Sea, most of them have a high salt content. En Gedi is one of only two freshwater springs located on the western shore of the Dead Sea and, because of the greater availability of land for agriculture at En Gedi, it is the best spring by which to settle.

Josephus praised En Gedi for its palm trees and balsam, and the writer of Ecclesiasticus spoke of wisdom that was exalted “like a palm tree in En Gedi” (24:14). One day, the prophet Ezekiel predicted, fishermen would line the shores of the Dead Sea by En Gedi (47:10). 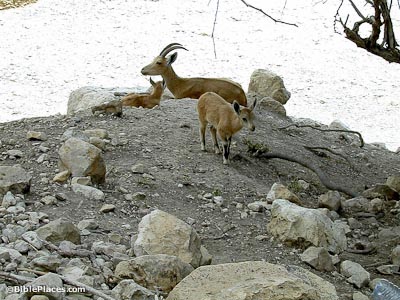 Around 1000 BC, En Gedi served as one of the main places of refuge for David as he fled from Saul. David “dwelt in strongholds at En Gedi” (1 Sam 23:29). En Gedi means literally “the spring of the kid (goat).” Evidence exists that young ibex have always lived near the springs of En Gedi. One time when David was fleeing from King Saul, the pursuers searched the “Crags of the Ibex” in the vicinity of En Gedi. In a cave near here, David cut off the corner of Saul’s robe (1 Sam 24). 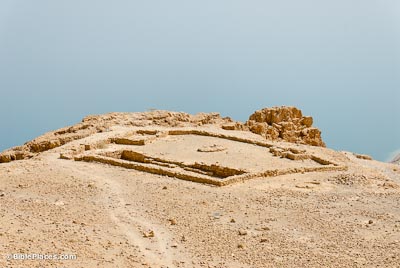 The earliest remains at En Gedi are of a temple from the Chalcolithic Period (circa 4000–3150 BC). Archaeologists believe that this is proof that En Gedi supported a significant settlement at that time. The “Cave of Treasure” in the Nahal Mishmar was excavated by P. Bar-Adon and is thought to be connected with this temple. The cave is approximately six miles (10 km) south of En Gedi. A hoard of extremely well-preserved artifacts was found in the cave, most of which were made of copper. It has been suggested that the articles were used in the temple rituals at En Gedi and were hid in the cave for safekeeping.

Ein Gedi | Biblical Oasis In The Desert (Sar-El) This page offers a good summary of the site and an even better video featuring beautiful footage.

Ein Gedi (All About Archaeology) Concentrates on the biblical connections of the site.

Ein Gedi (NET Tours) Includes five excellent pages of description and numerous well-chosen photos.  Some of our favorites are those adapted from photos from the Pictorial Library of Bible Lands with labels showing the major features from the air.