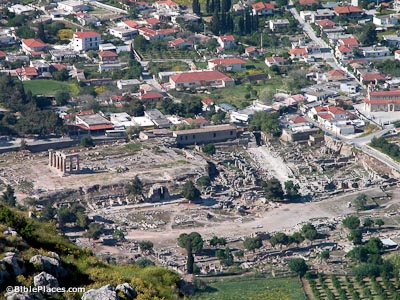 This is the view of the ancient city center looking from the Acrocorinth (with a big telephoto lens). On the left the standing columns of the Temple of Apollo are visible. On the right side the Lechaion Road can be seen. In between the two (and slightly down) is the ancient agora. 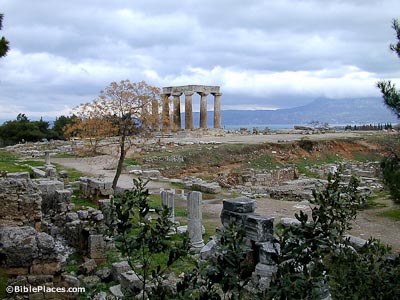 The lower city was the location of the Temple of Apollo while the Acrocorinth was dominated by the Temple of Aphrodite. Greek writers in the 5th-4th centuries BC characterized Corinth as a city of commercialized love and a “Corinthian girl” meant a prostitute. The Corinthian church of Paul’s day struggled with worldliness and sexual sin, both of which were typical of this cosmopolitan city. The temple originally had 38 columns of the Doric order; 7 are standing today. 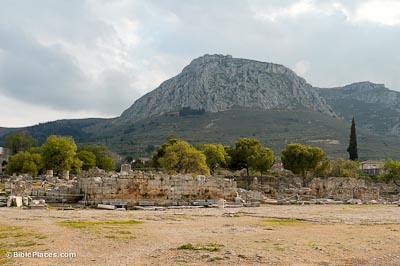 Paul spent 18 months in the city before the Jews of the city charged him with breaking the law and brought him before Gallio at the city’s place of judgment (bema). The mention of Gallio provides an anchor for New Testament chronology as we know from Roman sources that Gallio was proconsul of Achaia from June 51 to May 52. Standing on this platform, the proconsul dismissed the charges against Paul as a dispute of Jewish law and not of a criminal nature. 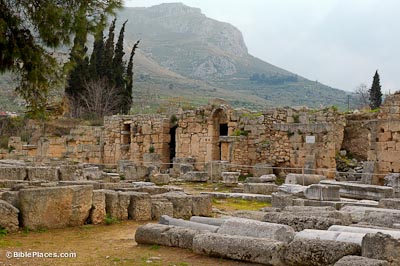 In Corinth Paul met Aquila and Priscilla, Jews recently expelled by Emperor Claudius from Rome. The three of these were tentmakers (or leather workers) and may have had their place of business in the city’s commercial marketplace (agora). This would have afforded Paul numerous occasions to speak with customers and passers-by of the resurrection of Christ. Acts notes that Paul spent each Shabbat trying to persuade Jews and Greeks. 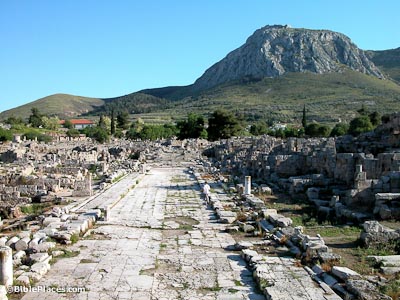 This main road ran from the city to the northern port of Lechaion, thus its name. The road was about 40 feet wide and included sidewalks and drainage channels. Steps along the road indicate that passage was not intended for wheeled vehicles. 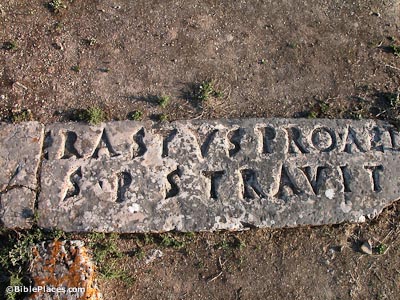 In 1929 this inscription was found mentioning Erastus as the one who paid for the paving of the street in return for his appointment as a city officer. It is likely that this is the same Erastus mentioned by Paul as sending greetings to the church at Rome (Rom 16:23). If so, Paul’s influence apparently extended to wealthy and influential Roman citizens of Corinth. 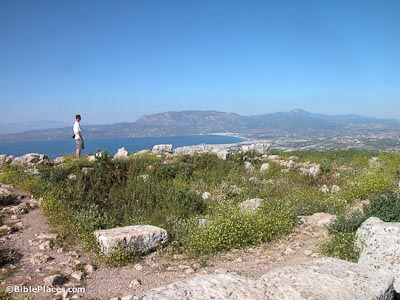 The acropolis of Corinth is known as Acrocorinth, and it rises about 1800 feet above the surrounding plain. At the highest summit was the Temple of Aphrodite. Interpretations that this was the location of the 1000 temple prostitutes have been challenged.

For related photographs, see our Corinth Area page. For photos illustrating Paul’s epistles to the Corinthian church, see our pages on 1 Corinthians and 2 Corinthians.

Corinth (Ancient History Encyclopedia). A good overview of the city’s history and remains.

Corinth (Personal Webpage). A page that looks at Corinth in connection with Paul.

Ancient Corinth and Acrocorinth (GreeceTravel.com). This article has interesting information and lots of lovely photos.

Corinth Legends and History (ThoughtCo.). The page delivers what its title promises, with the help of long quotes from ancient sources.

Corinth Computer Project. “A computerized architectural and topographical survey of the Roman colony of Corinth.” Provides detailed plans of the main structures and streets plus three dimensional images of the topography.

Ancient Corinth in 1945 (YouTube). This documentary includes fascinating old footage of the site!