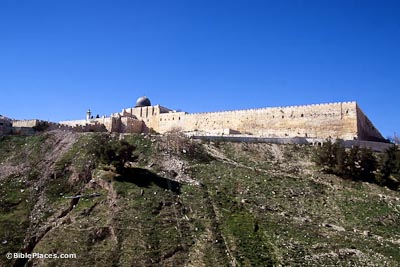 Often visitors wonder why the Temple Mount is not the highest point in the city when the Bible seems to describe it as such. The answer is that the city today (including the “Old City”) has grown and shifted from its original location. The earliest city of Jerusalem is the “City of David,” a smaller hill south of, and lower than, the Temple Mount. 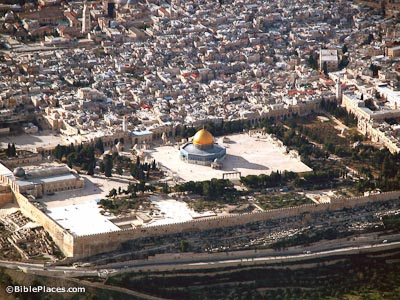 The present Temple Mount was constructed by Herod the Great beginning in 20 BC. Construction on it continued for 83 years until AD 64 when a halt was called and 18,000 workers were laid off (riots resulted). The Temple Mount is 1/6 the size of today’s Old City and covers 35 acres (14 ha). Construction of this rectangular platform required filling in a large part of the Central Valley. 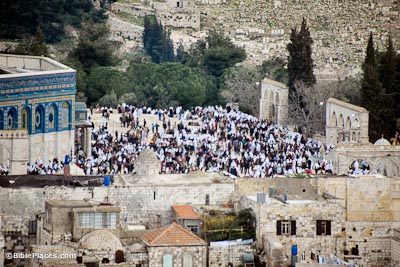 Herod enlarged the existing Temple Mount in order to accommodate the larger crowds of Jewish pilgrims coming for the feasts. Today Muslims in Israel celebrate Ramadan by coming to what they call Haram esh-Sharif (the Noble Sanctuary). More than 400,000 Muslims often gather here on the final Friday of the feast. See Dome of the Rock. 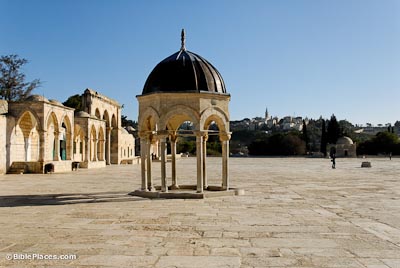 Dome of the Tablets

Because of Muslim control of the Temple Mount, archaeologists are prevented from working on the site. Consequently, scholars lack evidence for determining the precise location of the first and second Temples. Asher Kaufman has theorized that the Holy of Holies originally was located not under the Dome of the Rock but under the Dome of the Tablets (aka Dome of the Spirits). 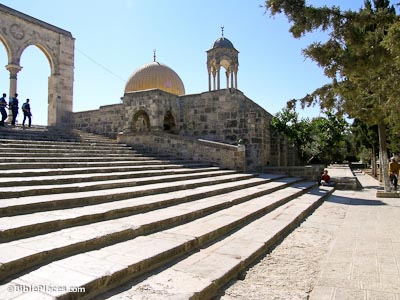 Leen Ritmeyer identified a large step at the bottom of one of the staircases which he believes is the top of the west wall of the pre-Herodian Temple Mount. This step is exactly 500 cubits from the eastern wall of the Temple Mount, matching the Mishnaic measurement of the (apparently earlier) Temple Mount. After this interpretation of this step, authorities laid new pavement to cover the wall. 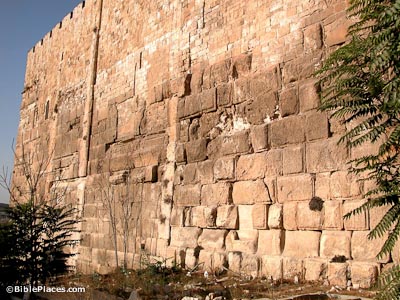 Related BiblePlaces.com pages: Dome of the Rock and Southern Temple Mount. For historical images of the site, see Life in the Holy Land. The Bible chapters related to the Temple Mount are many, including Matthew 21, Mark 13, Luke 4, and John 2.

The Temple Mount (Jewish Virtual Library) Retells the Jewish and later the Muslim history of the site, including links to descriptions of related terms.

The Temple Mount (See the Holy Land) A few photos, both old and new, along with several models help to illustrate the introductory information contained in this article. Includes discussions about the first and second Temples.


Temple Mount Sifting Project (official site) Run by those who are dedicated to finding archaeological artifacts that would otherwise never see the light, this is a fascinating look at the project begun by Gabriel Barkay.

The Temple Institute (official site) Features links to many research resources. The long term goal of this organization is “to do as much as possible to bring about the rebuilding of the Holy Temple in our time.”

A Short Chronology of Jerusalem and the Temple Mount (Personal Page, Lambert Dolphin) Brings together history from all ages, in timeline form, for a complete record of the Temple Mount. Reflects some political bias.

The Temple Mount in Jerusalem (templemount.org) Presents three theories on the location of the Jewish temple, highlighting the research of Tuvia Sagiv.

New Evidence for the Site of the Temple in Jerusalem (Associates for Scripture Knowledge) An extensive presentation of an alternate location for the Temple Mount, as proposed by Ernest Martin. See also a response to Ritmeyer’s critique by Martin.

The Temple Mount in Jerusalem (The Jewish Magazine) A lengthy article from 2001 about the illegal construction projects taking place on the Temple Mount. Interviews with several key personalities lend a well-rounded perspective to the issue.

The Noble Sanctuary (noblesanctuary.com) A well-done site from a Muslim perspective that doesn’t deny the existence of the earlier Jewish temples.