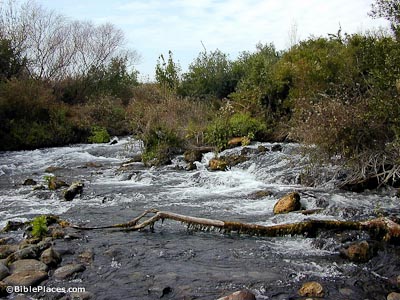 Headwaters of the Jordan 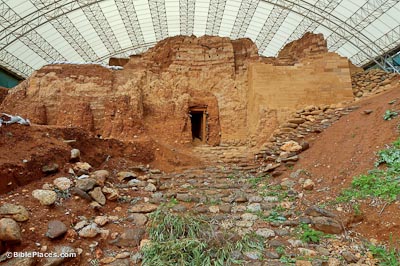 Built about 1800 BC, this mudbrick gate was in use for approximately 50 years before it was covered (and thus preserved) by an earthen rampart.

The style of the gate is typical for this period; it is a “Syrian gate” with three pairs of piers and four chambers, like those found at Megiddo, Shechem, and Gezer. 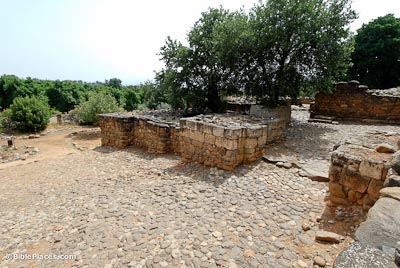 On the northern frontier of the kingdom, Dan was particularly well fortified. This gatehouse was built in the 9th century, probably by Ahab, and is part of a series of gateways discovered.

The foreground of this picture is the area of the discovery of the Dan Inscription which mentions the “House of David.” 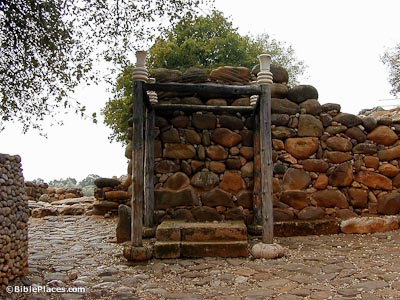 This may have been a place for the ruler next to the gate or a place for an idol to be set up.

2 Samuel 18:4: “So the king stood beside the gate while all the men marched out in units of hundreds and of thousands.” 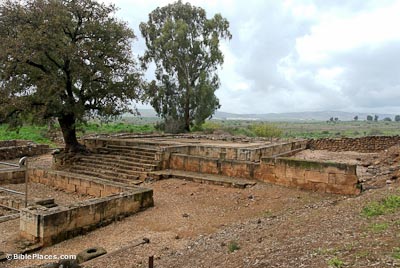 Nearly all archaeologists agree that this excavated podium was the one that Jeroboam constructed to house the golden calf at Dan. Archaeologists now think the platform was roofed.

Evidence of a four-horned altar has been found as well as religious objects such as three iron shovels, a small horned altar, and an iron incense holder.

For Bible chapters related to Dan, see Joshua 19 and Judges 18. See also our page Sources of the Jordan River at Life in the Holy Land.

The Ancient City of Dan (Land of the Bible) A nice overview of the history and archaeology of the site of Dan.

Dan (All About Archaeology) An archaeological discussion of Dan, including discussions of the Middle Bronze gate and the Tel Dan Stele.

An 1856 Account of Visiting Dan (book excerpt from archive.org) Read about the historic site of Dan, then known as Tell el-Kady. Written by the eminent geographers Edward Robinson and Eli Smith in Later Biblical Researches in Palestine and the Adjacent Regions, it gives a unique look at the site from well over a century ago. This account starts on page 390 of the original, and page 437 of this digital version.

The Sanctuaries at Dan and Bethel (Bible Odyssey) Strongly biblical and archaeological commentary on Dan.

Biblical City of Dan (Jewish Virtual Library) Highlights the history of the site, beginning with the Canaanite city, and several of the important archaeological findings, including the “House of David” inscription (there called the Aramaic Stele).