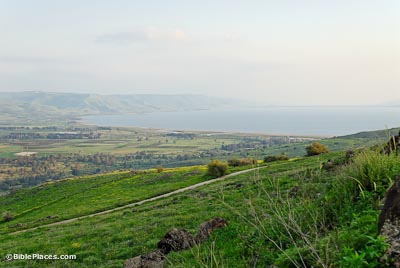 The northeastern shore of the Sea of Galilee is a fertile plain where the feeding of the 5,000 likely took place.  Israeli maps and excavators currently locate the New Testament city of Bethsaida at an ancient ruin known as “et-Tell.”  The excavation team, headed by Rami Arav, is insistent that this site be identified with ancient Bethsaida.  Others suggest that Bethsaida may be better located at el-Araj near the lakeshore.

There are many problems with the identification of et-Tell with Bethsaida, including:

In short, there is little to commend this site as being the Bethsaida mentioned by Josephus and the Bible.  For more of the excavators’ perspective, see the links below.  For more evidence against this identification, see Rainey and Notley, The Sacred Bridge, pp. 356–59. 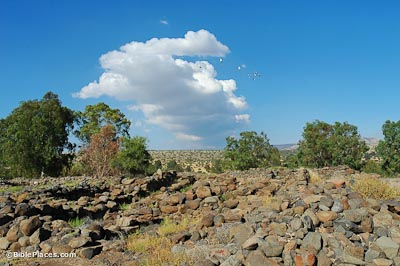 House of the Fisherman

The most impressive remains at this site are the Iron Age gate and two large Hellenistic houses.  The House of the Fisherman measures 4,300 square feet (400 sq m), and is believed to be a fisherman’s home based on the discovery of two types of lead net weights, a round lead weight of the so-called musket type, and a long, crooked needle.  Among the coins discovered in the house were two silver didrachmae of Demetrius II. 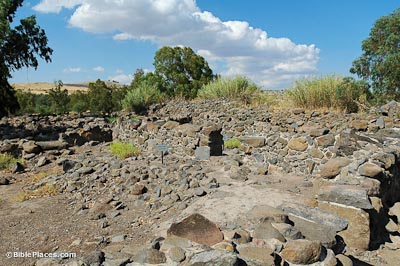 This house (2,700 sq ft; 250 sq m) included an undisturbed wine cellar with four complete Hellenistic jars.  In addition, a gold earring with the picture of an animal was found, as well as numerous examples of expensive imported vessels.  A hook and some anchors were found in the house, as were three iron sickles. 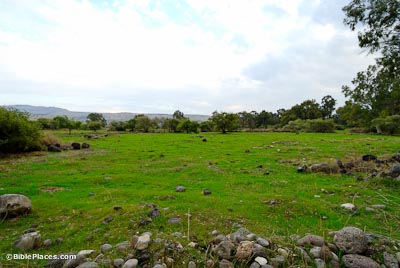 The feeding of the 5,000 most likely took place on the Plain of Bethsaida.  Mark 6:30 says the feeding took place at a “solitary place” and verse 39 says that the people sat down on “the green grass.”  After this, however, Jesus made his disciples “go over to Bethsaida.”  About 5 square miles (13 sq km) in area, the Plain of Bethsaida is very spacious and is crisscrossed by streams, aqueducts and irrigation canals.  There are many flat hills on which it would be possible to seat large numbers of people.

At BiblePlaces.com, see the related sites of Sea of Galilee, Capernaum, Chorazin, Cove of the Sower, Mt. of Beatitudes, and Tabgha.

Bethsaida Excavations Project (Official site) Offers concise descriptions of the history and location of the site as well as excellent photographs and descriptions of artifacts found during excavation.

Bethsaida Field Reports (University of Nebraska, Omaha) Official field reports of each dig season at et-Tell between 2003 and 2016; the page also includes links to pertinent articles about the site and its finds.

Where Is Biblical Bethsaida? (Bible History Daily) A brief discussion of el-Araj and et-Tell, both believed to be Bethsaida by their excavators, explaining the ongoing controversy and discoveries.

Bethsaida (Into His Own) Brief encyclopedia-type article with internal links to articles on pertinent people and places.

Bethsaida: An Ancient Fishing Village on the shore of the Sea of Galilee (Israel MFA) Contains sections highlighting the Biblical Period and the Hellenistic/Roman Periods in the history of the site.

Biblical Sites: Is et-Tell Bethsaida? (Biblical Archaeology Report) Article discussing whether et-Tell is the best choice based on current evidence for biblical Bethsaida.

Biblical Sites: Is el-Araj Bethsaida? (Biblical Archaeology Report) Article discussing whether el-Araj is the best choice based on current evidence for biblical Bethsaida.

The Lost Home of Jesus’ Apostles Has Just Been Found (Haaretz) A 2017 report of excavations at el-Araj, including the discovery of a Roman bathhouse.

A Visit to the “Real” Bethsaida (Holy Land Photos) Carl Rasmussen details his 2019 visit to el-Araj, along with a few photos of the excavations there.

11th BCE City Gates Found at et-Tell (Jerusalem Post) A 2019 article regarding the 2018 discovery of city gates at et-Tell, with comments from lead archaeologist Rami Arav.