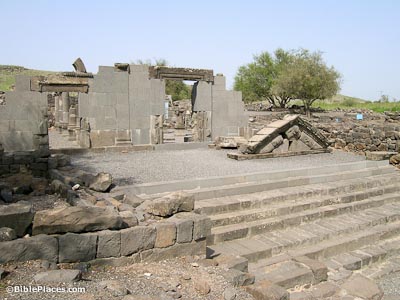 The synagogue at Chorazin is a typical “Galilean” style synagogue.  These synagogues are characterized by: 1) a basilical shape with three hallways separated by two rows of pillars; 2) three doorways and the central one is the largest; 3) benches around the interior walls; 4) a stylobate to support the weight of the arches. 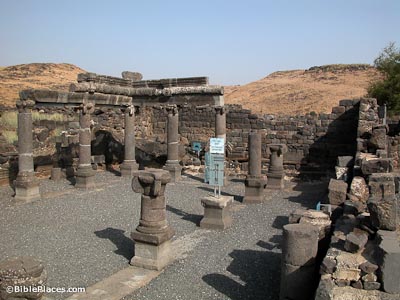 This excavated synagogue dates from the 2nd century, but J. Ory in an unpublished report in 1926 described an earlier synagogue 650 feet (200 m) west of this one:  “A square colonnaded building of small dimensions, of a disposition similar to the interior arrangement of the synagogue, 7 columns, 3 on each side…with sitting benches in 5 courses” (in G. Foerster, “The Synagogues at Masada and Herodium,” pp. 24–29 in Ancient Synagogues Revealed, ed. Lee I. Levine [Jerusalem: Israel Exploration Society, 1981]: 26).

Other synagogues had these types of decoration, but they were defaced during stricter times of enforcement of Jewish laws.  Probably this one was not defaced because the synagogue was destroyed first.  Christians viewed the destruction of such earthquakes as God’s judgment on them for their unbelief. 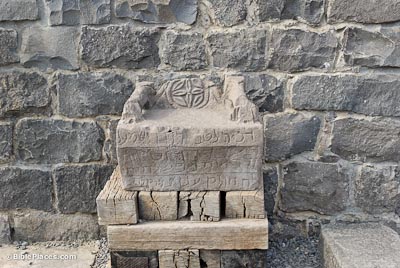 This “Seat of Moses” was found in the 1920s and it has an Aramaic inscription remembering Yudan.  Jesus references this position of authority, “The teachers of the law and the Pharisees sit in Moses’ seat.  So you must obey them and do everything they tell you.  But do not do what they do, for they do not practice what they preach” (Matt 23:2-3).

At BiblePlaces.com, see the related sites of Sea of Galilee, Bethsaida, Capernaum, Cove of the Sower, Mt. of Beatitudes, and Tabgha.

Chorazin (Land of the Bible) A brief but informative article including biblical and archaeological information.

Synagogue at Chorazin (Ferrell Jenkins blog) Includes some pictures and information specifically about the synagogue excavated at Chorazin.

Talmud-Era Winepress, Mosaic Unearthed in Jewish Village Condemned by Jesus (Times of Israel) This 2019 article includes several pictures of the winepress and the mosaic recently excavated at Korazim.

Korizim or Korazim (Bible Scholars; online slideshow tour of the site) Limited text accompanied by basic photos walking through the site, including the city quarters and mikveh.

Korazim (Biblewalks.com) Offers the reader a historical overview of the ancient city. Features good pictures that illustrate and enhance the text.